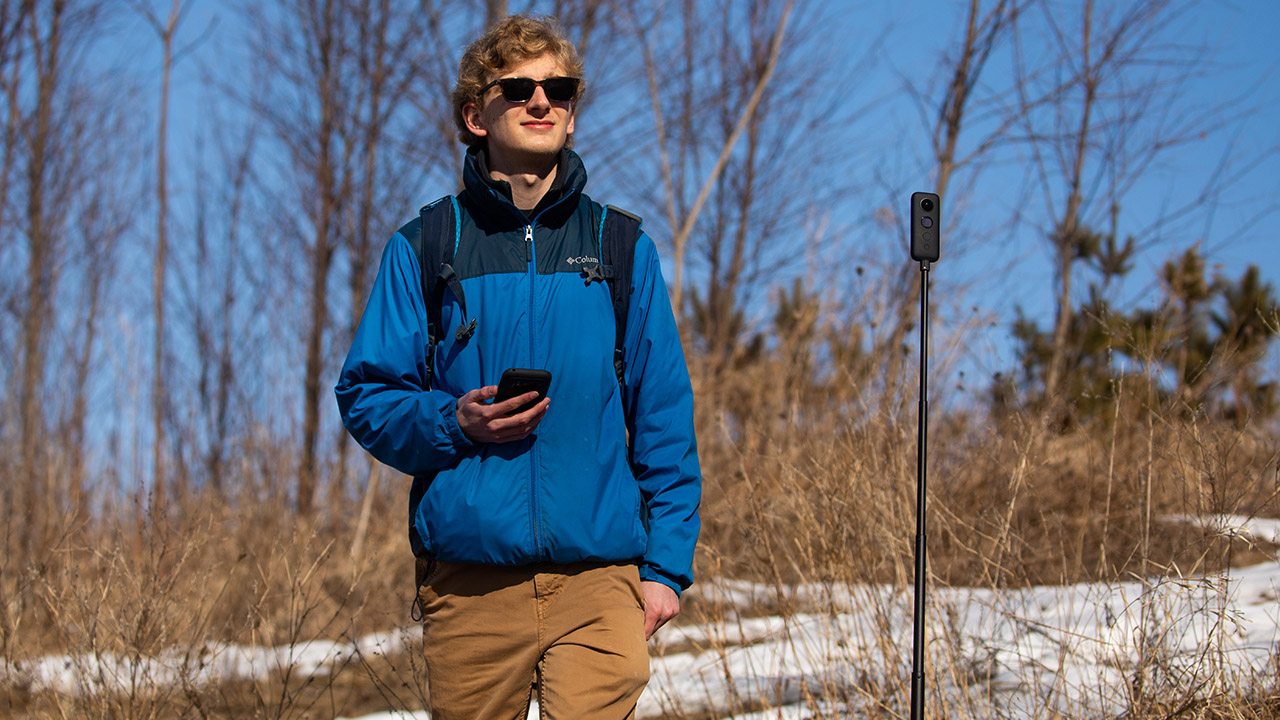 Growing up in Platteville, Tyler Vargo knows firsthand the beauty and diversity of Southwest Wisconsin, but like many rural areas, the region is significantly underrepresented on digital mapping platforms, like Google Maps. Through a project sponsored by the University of Wisconsin-Platteville’s Undergraduate Research and Scholarly and Creative Activity program, Vargo is setting out to change this one location at a time.

Working with Jessica Brogley, lecturer in the School of Education, Vargo is researching and selecting sites in Southwest Wisconsin that he considers to be underrepresented, yet educationally, scientifically or historically significant. Each week, he travels to one or two sites, takes several 360-degree photos and uploads them to Google Maps.

“If you look at larger cities on Google Maps, you will see thousands of 360-degree images and Google Map routes throughout the location,” said Vargo. “In contrast, Southwest Wisconsin has very few 360-degree pictures or routes other than the main streets mapped by Google themselves. I want to bring some much-needed attention to our local area by uploading images of underrepresented areas to Google Maps.”

As a future biology teacher, Vargo, who is a junior broad field science major with an emphasis in secondary education, said he sees a number of opportunities for using this technology in the classroom.

“Using Google Maps in the classroom is an excellent way to bring place-based learning into schools and build community involvement,” he said. “For instance, as a future biology teacher, I could use images from Google Maps to represent various ecosystems within our state where certain species live, which could lead to a discussion about diversity. When I select these places, I understand there is scientific value to them. For example, the bluffs of the Driftless Area help when teaching about erosion. But there is also a lot of history in this area, from countless generations of people, and to show that through photographs is amazing.”

Part of Vargo’s project involves creating a lesson plan that uses his photography. He said he hopes the images will someday not only help himself in the classroom but also other educators throughout the state and beyond.

“Currently, there are few resources online for educators to use to show what different climates, ecosystems or landmarks look like within Southwest Wisconsin, at least none that offer the type of interaction that Google Maps offers with 360-degree images and walking routes,” said Vargo. “Overall, the main purpose of this entire project is to make far-off or hard to showcase areas easier to bring into the classroom for both students and educators to enjoy, and in doing so, hopefully making these areas better represented and appreciated by everyone who visits them online or in-person.”

So far Vargo’s documentation has included the Platte River, O’Leary Lake, Potosi Point and Governor Dodge State Park. He said what has surprised him most so far is how many views the photos are already receiving, with his photos of O’Leary Lake receiving nearly 500 views within the first month of posting. Vargo is interested in expanding the project throughout the Driftless Area, focusing on waterways and geologically significant areas of the region in Minnesota, Iowa and northern Wisconsin.

Vargo said that for some students, these images have a greater significance beyond their educational use in the classroom.

“Some students go on vacation and travel a lot, so they’ve seen some of these places,” said Vargo. “But, when you get into rural communities, their hometown may be the only place some of those students know. Being able to access Google Maps and look at all these other places, even some that are only a few miles from school, broadens the students’ vision of what’s out there.”