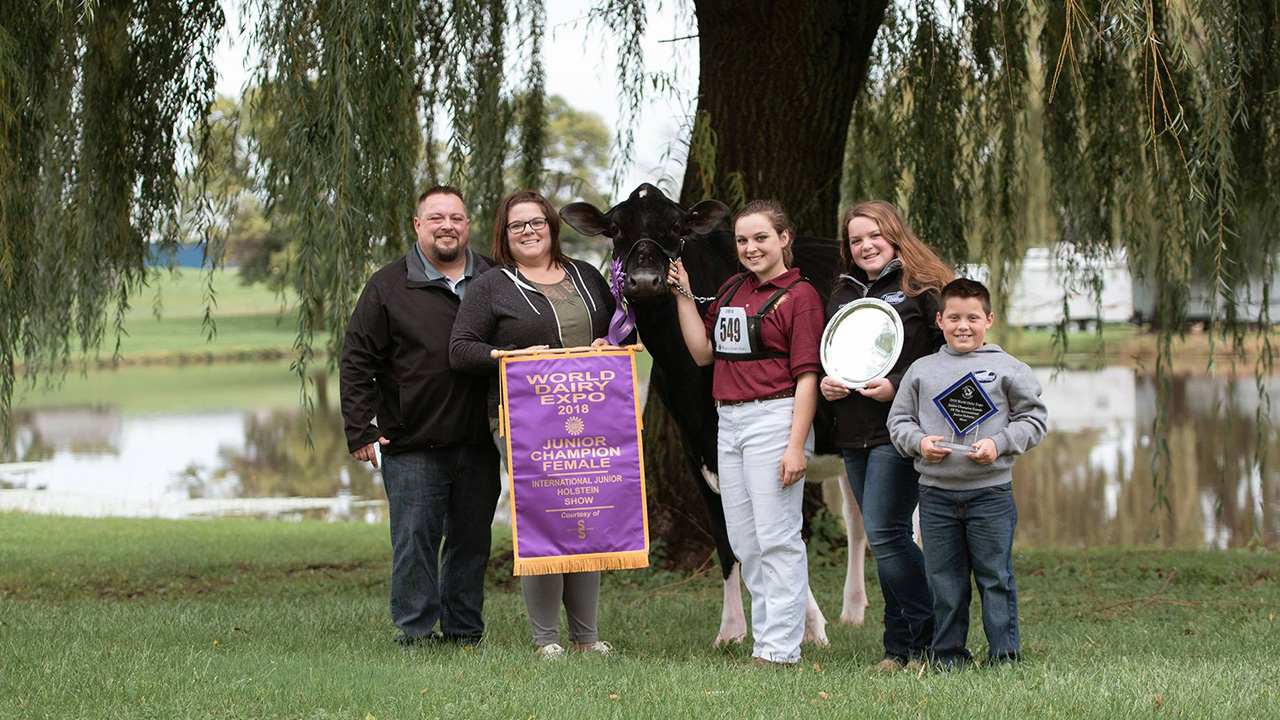 Ryan Weigel and his family with their prize winning cow, Altitude, which Weigel and partners purchased at the Pioneer Dairy Club Classic in 2000.

Throughout his career, Ryan Weigel has felt the influence of UW-Platteville. From the time he graduated as an animal science major, to his own role as an educator today, Weigel acknowledges the friends, family and mentors that have helped him along the way.

Early in his career, a recommendation from Jeff Dornink, who at the time was the manager of Pioneer Farm, helped him secure a job he loved with Bou Matic, a dairy equipment manufacturer out of Madison, Wisconsin. For several years, Weigel had the opportunity to travel the world as a product specialist for the company, covering much of North America and New Zealand. Later, when he was looking for a new opportunity, it was Dr. Michael Mee who gave him a lead that would change his life.

“I still remember that conversation. World Dairy Expo was hiring a show manager and he thought it’d be a perfect fit for me. However, the deadline had passed.  I was disappointed I had maybe missed a golden opportunity, but he encouraged me to contact them anyhow and see if they’d still accept my application. I made that phone call and started at Dairy Expo two weeks later,” Weigel said. “My position at Dairy Expo allowed me the opportunity to work closely with the university on many different occasions. Annually, I could count on Dr. Mee, Jeff Dornink, Dr. Mark Zidon and other faculty members, as well as many students from Platteville, to help pull off the greatest dairy show in the world.”

Weigel would spend seven years with the World Dairy Expo and another nine with Accelerated Genetics in Baraboo, Wisconsin before moving closer to home to help support his family farm. It’s small family farms like his that Weigel hopes the UW-Platteville Dairy Innovation Hub will be able to help the most.

“While we still have cattle, we did sell our dairy herd recently. We were lucky because it was just time for dad to step back from it, but a lot of families don’t have that choice,” Weigel said. “I’m excited to see how collaboration between UW-Platteville and the other big dairy colleges in the state can help those families. If we can help producers in the state be more efficient, we can help them compete.”

Research at the Dairy Innovation Hub will cover everything from best practices for water and resource use, to agribusiness and dairy herd management. This opportunity was particularly exciting to Weigel, as he knows first-hand that UW-Platteville is already raising some of the best cattle in the world.

“The best business decision I’ve made thus far in my life also came via this university and the 2000 Pioneer Dairy Club Classic, a registered dairy cattle sale organized by the students. Two friends – both fellow alumni – and I purchased an animal, 'Altitude,' at that sale. She would go on to be named International Cow of the Year in 2008 and was proclaimed the Wisconsin Cow of the Year by Governor Jim Doyle in 2009,” Weigel said. “Her offspring have won national shows, sold embryos and semen worldwide, topped many sales, and even received mention on MSNBC and 'The Tonight Show with Jay Leno.' “Altitude” will be written in history as one of the most influential animals in her era.”

Now, Weigel shares his years of knowledge and experience as an Animal Science instructor at nearby Southwest Wisconsin Technical College. “I’ve been able to start dairy judging here and share the experiences I had at Platteville and throughout my career with another generation of students,” said Weigel.