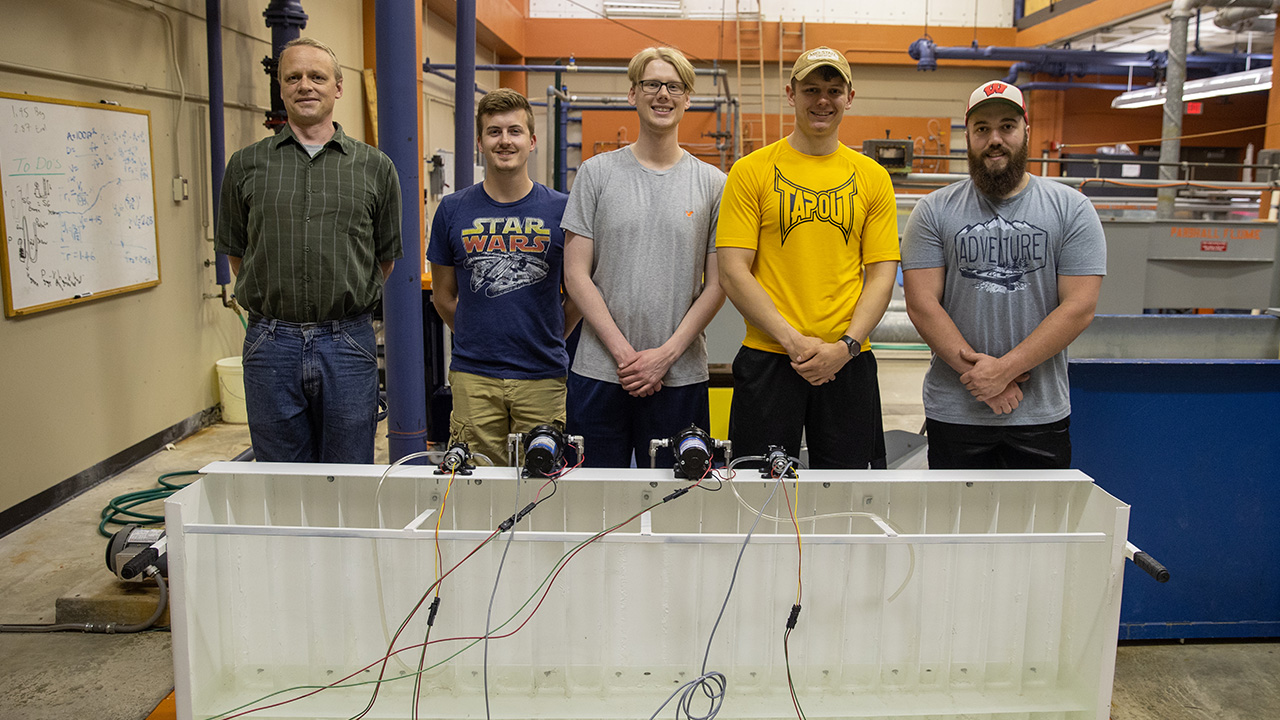 A group of University of Wisconsin-Platteville mechanical engineering students partnered with the U.S. Geological Survey to help combat the spread of invasive species by designing a ballast tank injection system. The project was one of more than three dozen Senior Design projects presented at the spring 2022 College of Engineering, Mathematics and Science Senior Design Open House. The team included Nathan Christy, Cameron Ertl, Nick Schroeder and Tom Vanderwyst and was advised by Dr. Gavin Saari of the USGS and Dr. Thomas Zolper, associate professor of mechanical engineering.

Ballast water, held in a ship’s ballast tank, adds weight to the ship, making it more stable when unloaded. The water is pumped in and out as needed to compensate for cargo the ship is carrying. While this is crucial to the safety of the ship, it also unintentionally introduces non-native species to new ports. Aquatic nuisance species – such as zebra mussels and the round goby fish – also get pumped in and out with the water, causing them to spread worldwide.

According to reports, about 60% of aquatic invasive species introductions are caused by ballast tank transport. With minimal or no natural predators to control their populations, aquatic nuisance species can rapidly multiply and pose a serious threat to their new ecosystem, often outcompeting the native species and reducing biodiversity.

The USGS tasked the senior design team with creating a ballast tank injection system that would deliver a treatment to the ballast tank water, thereby eliminating the invasive species, and then deliver a neutralizer to negate the treatment. Under Zolper’s direction, the students designed and built a 1:24 scale ballast tank for testing a chemical distribution system.

“We can use dimensionless equations to establish similarity conditions whereby the scale model can represent a full-scale system,” explained Zolper.

The system included a configurable set of nozzles and valves to create different flow patterns. The students demonstrated the injection system using dyed citric acid and baking soda to simulate the treatment and neutralizer. In constructing their ballast tank model, they selected a Plexiglas window and painted the structure white, so that USGS researchers can easily see the dyed surrogate substances circulate in the tank.