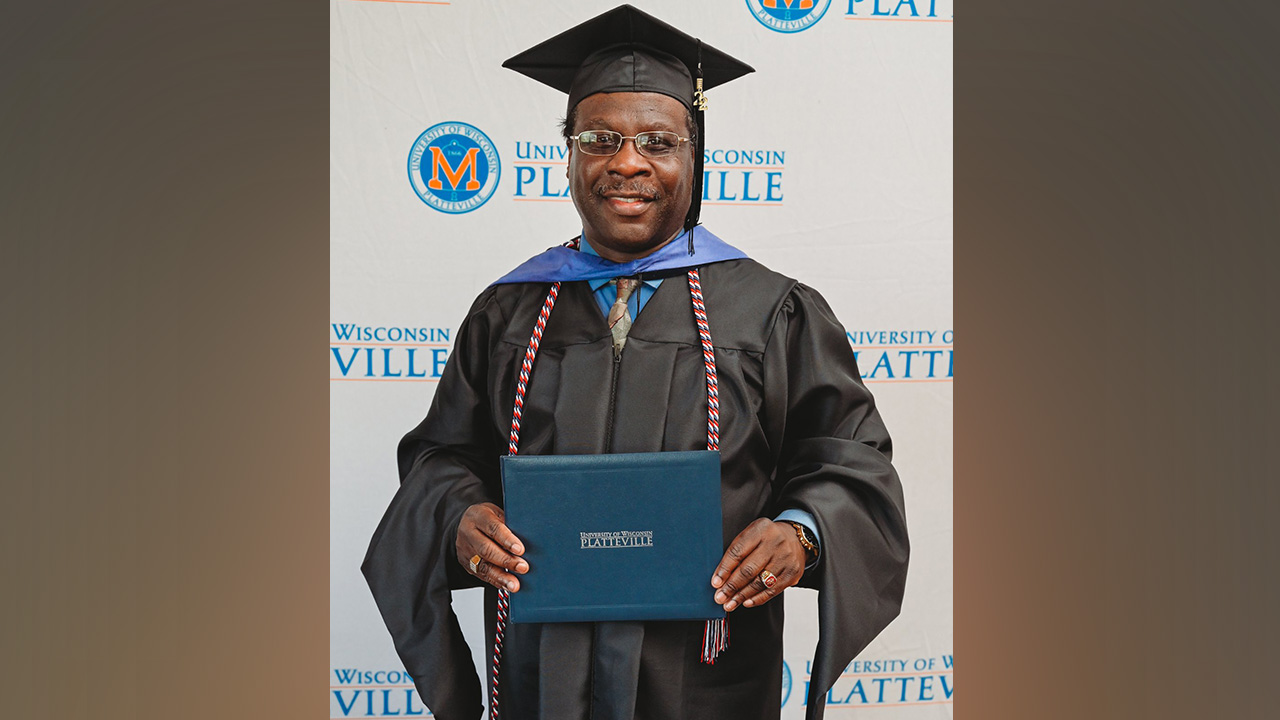 For Shar-Ron Buie, life isn’t about helping oneself, but enhancing the lives of others.

This philosophy is evident in all three positions Buie holds. Between serving as a community liaison at Marquette University, as a case manager for the Veteran’s Transitional Housing Program in Madison, Wisconsin, and as a health navigator at the JustDane organization, it’s easy to see Buie has his hands full helping other people most days. Split three ways, the demands of his jobs aren’t easy, but together they form a mission Buie enjoys and believes in. A mission that in no small part influenced his decision to return to school.

While some prospective students may struggle on deciding where to go to graduate school, this was never the case for Buie. Being an alumnus of the University of Wisconsin-Platteville, the choice was obvious to continue his education at his alma mater.

“I was looking for the type of education that’s pragmatic and grounded in reality,” Buie said. “Having received my bachelor’s degree in business administration from Platteville’s distance learning department previously, I knew what to expect, and so I’m proud to say that as a Pioneer, UW-Platteville was the only school I considered.”

Looking to dive into his classes, Buie enrolled in the university’s online Master of Science in Criminal Justice program in January 2021, and officially graduated this past May. Along the way, Buie sought to challenge himself and apply what he learned in class to his everyday responsibilities, though he admits to connecting with some classes more than others.

“One of the last classes I really connected with was Crisis Management,” said Buie. “Because every job I have centers around justice-impacted, legal-system impacted, or disenfranchised individuals, Crisis Management was right in my ballpark. It gave me some great techniques on how to handle extremely stressful situations, and I continue to use these techniques every day.”

Not only did Buie apply classroom lessons to his work, he brought his work to the virtual classroom. This spring, UW-Platteville hosted its first Pioneer Pitch: Master’s Showcase event – an online competition in which graduate students record a three-minute video explaining a topic of interest to a wider audience. Buie’s topic centered on the stripping of an incarcerated veteran’s rights upon their 61st day in jail. The reasoning behind this statute is because if a person is incarcerated, they’re ostensibly provided for by the state or federal government, and their veteran benefits are therefore diminished. Buie maintains this policy can snowball into a lot of pain for affected veterans, however.

“Let’s take a veteran who is sent to jail for a traffic violation, and they go there for six months,” said Buie. “They strip your benefits from $3,000 a month to maybe $300 a month. Sadly, this person’s bills, rent and monthly car payment still accrue, but they’ve lost their benefits to continually pay for them. So, this person will step out of jail six months later in a high amount of debt, which is just enough time for them to lose everything. That’s crazy, and this is a problem I really want to change and bring awareness to in America.”

Buie says this problem came into effect based on decades’ worth of interpreting the original policy, until the misinterpretation eventually became the new meaning. Spreading awareness of this issue remains Buie’s biggest focus, and because of this mission, he submitted his topic presentation to the Pioneer Pitch event. It was a decision that ultimately paid off. Not only were the competition judges impressed by his video, but the wider audience was too – a development that resulted in Buie securing first place in the competition and the People’s Choice Award.

Moving forward, Buie plans on continuing to make a difference in his community and beyond. In addition to helping marginalized individuals as part of his daily work, he has an opportunity to teach a course at Marquette University in January 2023. What’s more, Buie plans to pursue a Ph.D. in leadership and education, capping his educational journey on a high note.

“If I’m going to start teaching in 2023 and I’m already working at Marquette in the Education Preparedness program, I think attaining a Ph.D. is the appropriate way for me to go,” Buie said, before adding with a smile: “It’s something I’ve always been interested in, and – hubris aside – I kind of like the term ‘Dr. Buie.’”

Time will tell whether we’ll get to meet Dr. Buie someday, but one thing is clear: Even in his middle age, Buie’s future remains as bright as the truth he endeavors to teach.