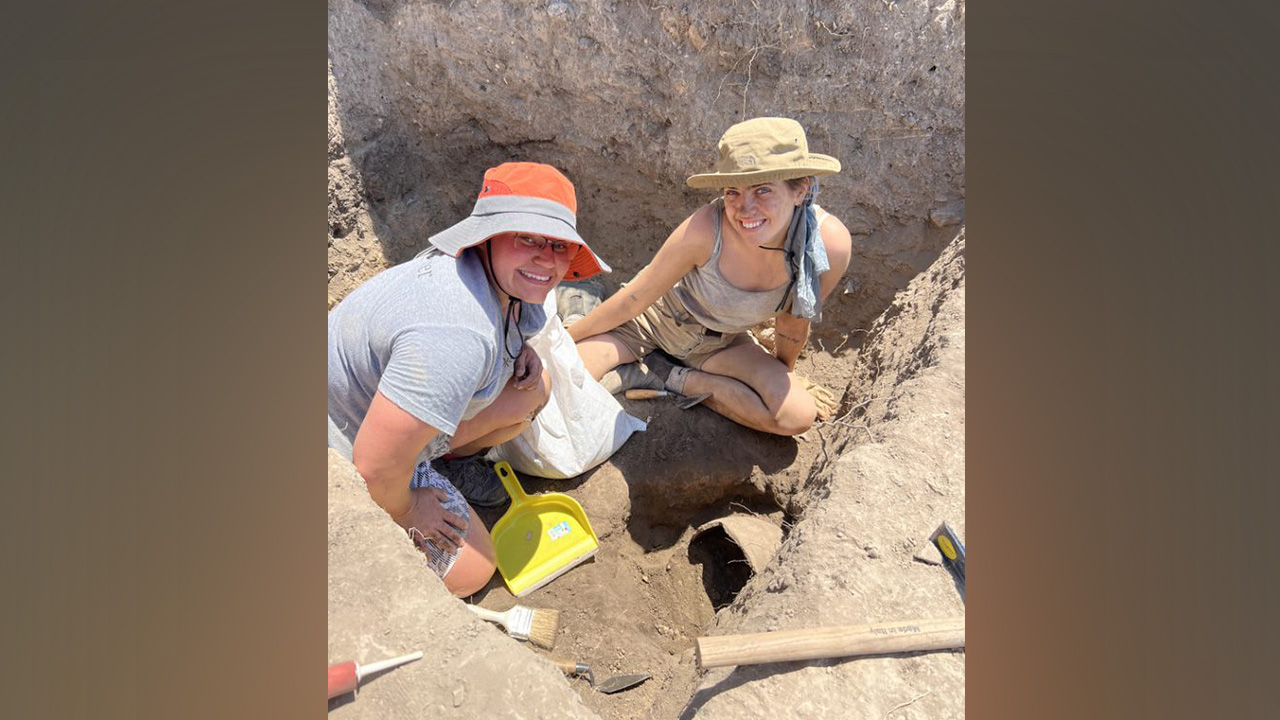 There’s more to Becca Bartusewich than meets the eye.

In addition to being an instructor, most know her as the advising manager for the Office of Professional Program Support at the University of Wisconsin-Platteville – but these titles only form part of the picture. Outside of overseeing a team of advisors and their 1,100 distance students, both graduates and undergraduates, Bartusewich maintains a different educational passion. One that doesn’t involve the people of the present, but those of the past.

Bartusewich is an archaeologist at heart. A quick glimpse at her educational background reinforces this fact, as she’s earned two master’s degrees – one in ancient history, the other in ceramic and lithic analysis – and a Ph.D. in anthropology over the past 14 years. Hers is a long journey filled with many highlights, yet most don’t know it all began with a single misstep.

“When I was an undergrad I thought I wanted to be a veterinarian,” Bartusewich said. “Then in my second year, I took an early morning genetics class and hated everything about it. Following this, my advisor suggested I try archaeology, since I was a big fan of history. That was the right call. I was hooked after my first season and was invited back as staff for the next season. So basically, I served as a field student in 2004, then served as staff for that project from 2005 off and on until 2017.”

During this time, Bartusewich also held several teaching positions at different universities, instructing classes focused on anthropology and social sciences. Another way she stayed connected to the archaeological community was by attending conferences, with her most recent event occurring this past April in Chicago, Illinois. It was here that an exciting opportunity presented itself to Bartusewich – one that pulled her back onto the excavating field.

“Over that weekend I met up with a colleague of mine, who I’d worked with on the island of Cyprus for many years,” Bartusewich said. “We caught up, went to the conference together, and then a week later he messaged me and said ‘Hey! So this project that the Oriental Institute at the University of Chicago is doing needs more staff. Are you able to help?’”

After getting the green light at UW-Platteville, Bartusewich happily accepted. She was brought on as an area supervisor for the expedition, a position responsible for overseeing a team of 15 assigned to a dig site. Given her past experience as a staff member, the responsibility was nothing new to Bartusewich, though she admitted it requires a lot of work.

“It sounds great until you have to write the report,” Bartusewich said with a small laugh. “There’s a lot of shifting your data and making sure you’re being accurate and relating different areas to one another.”

Even so, her excitement for another archaeological excursion couldn’t be shaken. In early August Bartusewich set off on a new adventure, leaving the United States behind for four weeks abroad. The expedition itself was organized among three different universities: The University of Chicago, Humboldt University in Berlin, and Ben-Gurion University in Israel. It’s this last location that served as Bartusewich’s final destination. Her team settled near Tel Keisan, a dig site located five miles from the Mediterranean coast in Israel’s Galilee region.

Having written her dissertation on the Iron Age in the Eastern Mediterranean, Bartusewich wasn’t a stranger to the area’s history and ancient cultures, yet – similar to the students she supervised – the expedition still proved to be a learning opportunity for her.

“I’d never dug a step trench before,” Bartusewich said. “So just the whole process of figuring out how to dig something on a slope – a slope with a 45-degree angle, covering a large area – was new to me. The ‘aha moment’ was solving how to do that so people were safe and we could get a better understanding of the different stratigraphy and cultural levels present in the dig site.”

Another “aha moment” came for Bartusewich when her team unearthed a discovery in the dated soil. A discovery that didn’t unearth any physical evidence of a past civilization, but rather the echo of one.

“I think the coolest discovery for me was a feature we actually caught in the side of the balk,” Bartusewich said. “A balk is basically preserved dirt between areas, so that you can see the different levels of stratigraphy and cultural change. We could actually see the outline of where the covering of an oven feature would have been, but the covering was gone, because usually it's from pottery and organic materials, so all that had disintegrated and disappeared. But because we caught it in the balk you could see the outline of the particular item.”

As small as this discovery was, the reveal that someone once cooked there, in the very spot Bartusewich stood, was enough to excite her. It’s these rare peeks into the past that form the core of Bartusewich’s passion, with each discovery serving as another hook to keep her digging for new evidence. Yet as enjoyable as these moments are, Bartusewich cautions there’s much more to archaeology than excavating pieces lost to time.

“Ninety percent of field-based sciences are actually done in the lab,” Bartusewich said. “For example, this project was a month of digging, but they’ll be analyzing the data from this project for years. So, if anyone has great dreams of being Indiana Jones or making lots of money in the field, that’s not most of our reality.”

Despite this, Bartusewich revealed she’s always open to more excavating opportunities that may come along. For her, the fun is in the process, the journey, of discovery. A journey that doesn’t lead to the future, but to the distant past. She simply follows the footprints of history to take her there.