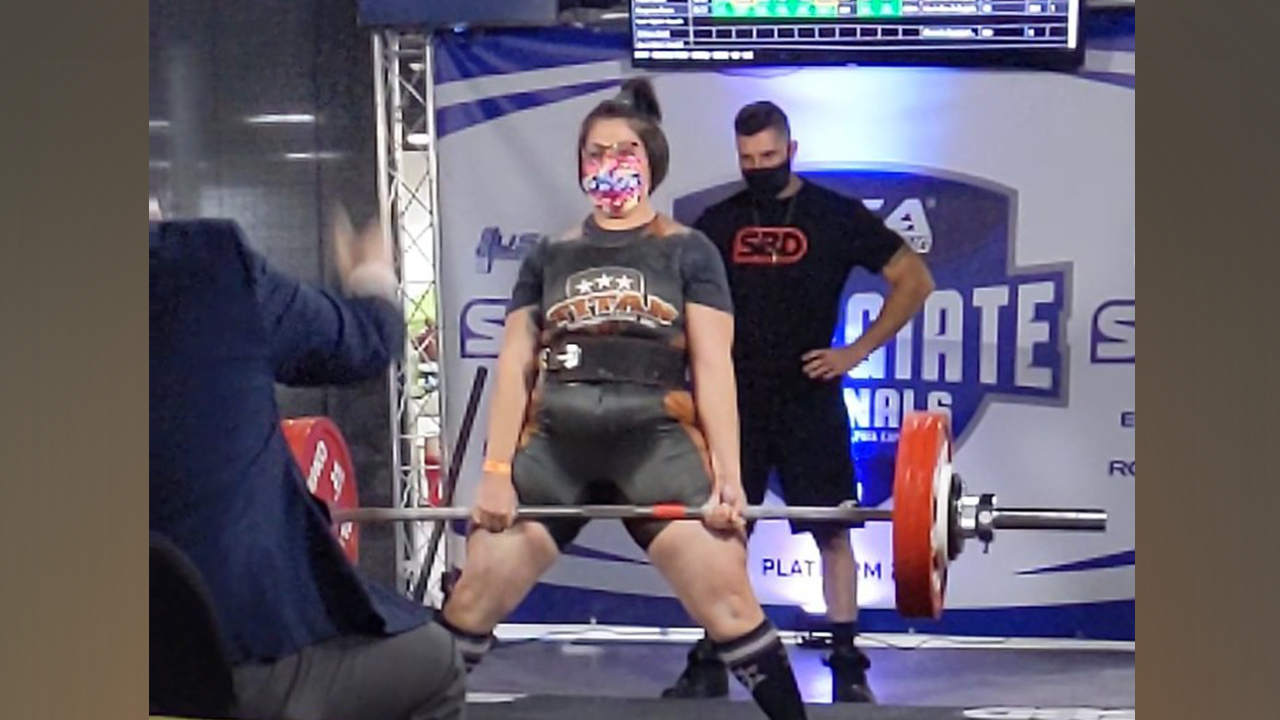 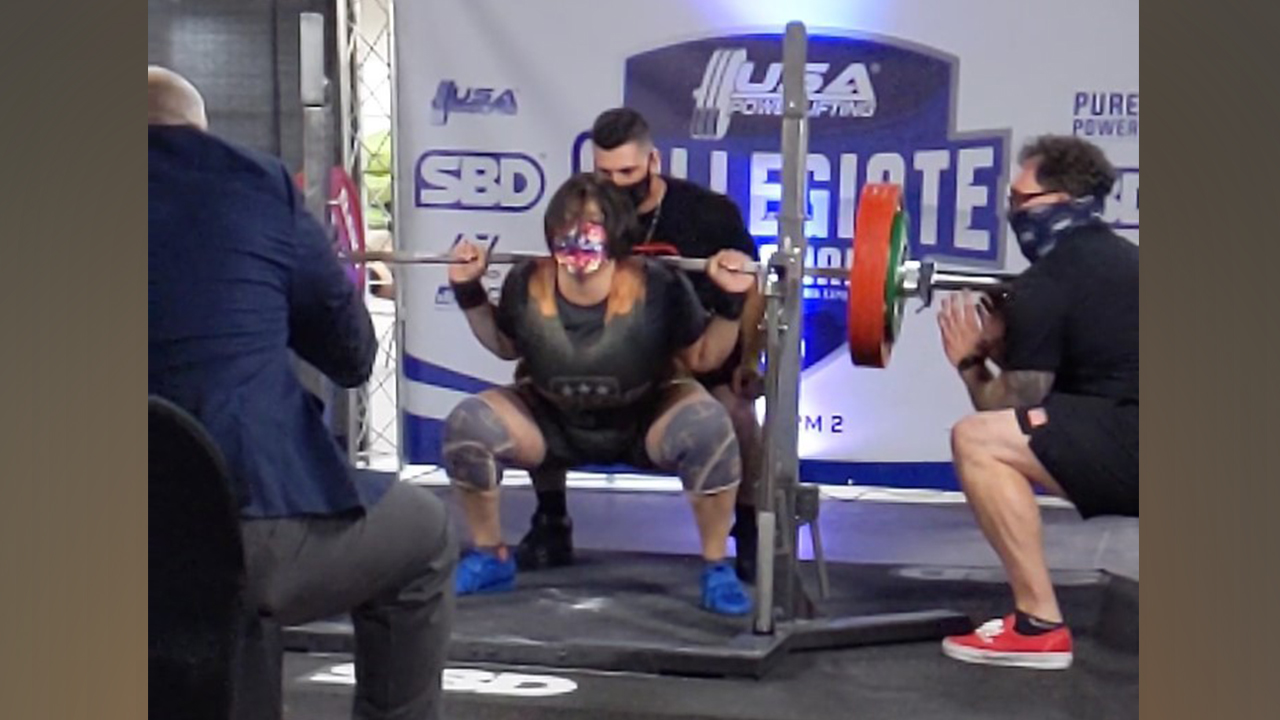 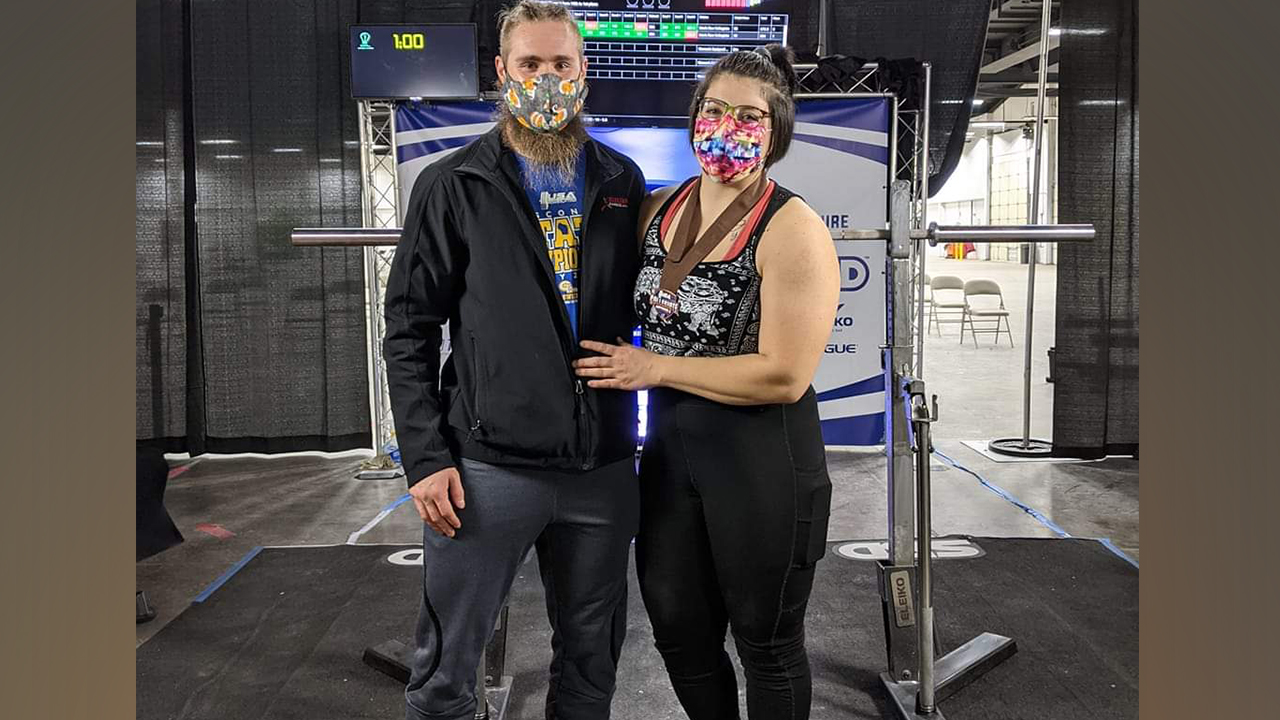 Ariana Aranda, a senior elementary education major at the University of Wisconsin-Platteville, recently competed in the USA Power Lifting 2020 Collegiate Nationals competition, where she took third place in her weight class and tied a Wisconsin state record.

During the competition, held outside of Philadelphia, Pennsylvania, Aranda performed three attempts at three types of lifts – deadlift, squat and bench press. Her best lift from each type was recorded for a combined total of 467.5 kilograms – roughly 1,030 pounds ­– earning her the third-place title. Aranda also achieved a personal best in the squat lift of 435 pounds and tied the Wisconsin state record for deadlift, in her weight class, with 425 pounds.

Aranda, originally from Hanover Park, Illinois, said her powerlifting journey is somewhat unexpected, even to her, having never set foot in a gym before coming to UW-Platteville in 2015.

“My only fitness was whatever sports I did in high school – softball, tennis and some recreational soccer,” said Aranda. “There was no strict lifting or workout regimen.”

She took an aerobic weightlifting course during her first year at UW-Platteville, where she found herself surrounded by classmates who were mostly athletes and familiar with weightlifting programs and equipment.

“When the professor asked, ‘who is new to the gym and doesn’t know their way around?’ I thought, ‘I know how to start a treadmill, and that’s about it.’ My roommate and I were the only ones whose hands shot up in the air,” said Aranda.

Aranda soon found she had a natural talent for weightlifting.

“I think I started out naturally stronger at it and adding numbers to the bar just kept boosting my confidence,” said Aranda. “The next year, one of my friends who knew I liked heavy lifting asked if I had ever heard of power lifting. I hadn’t, but I said I would give it a try.”

Aranda’s first meet was in 2018 in Davenport, Iowa, where she discovered how supportive the powerlifting community is.

“Everyone was so friendly and cheering each other on,” said Aranda. “You are competing against other people, but you are also really competing against yourself, and it’s super cool to see people lift weight that is seemingly past their capacity.”

After tying the Wisconsin state record for deadlift at the recent competition, Aranda now has her sights set on breaking the record, which she hopes to do at the Wisconsin State Championship in Germantown, Wisconsin, on Jan. 23. She typically trains four days a week, in sessions that last up to two hours. While her initial drive in the sport came from seeing her own personal improvement, it eventually became just as much about the community she built and inspiring others, especially at her gym, Snap Fitness, in Platteville.

“At first, as I was increasing my amount of weight, I just felt really proud,” said Aranda. “Then, for a little while, it became about trying to beat all the guys in the gym. But now it’s building a community – whether it’s people in powerlifting, or just others at the gym – that really drives me. I have people telling me that they see how hard I work when I’m there and that it pushes them to work just as hard at whatever their goals are, and that’s really empowering. A lot of the reason I keep doing it now is the community we’ve built.”

“Even professors on campus kept checking in with me, and just knowing that they were caring and supporting was really heartwarming,” said Aranda.

Besides her upcoming competition in January, Aranda is also preparing for her final semester at UW-Platteville, during which she’ll be interning at Cuba City Elementary School, teaching a group of fourth grade students. She said there are a lot of lessons she has learned from competitive powerlifting about adaptability and perseverance that will help make her a stronger teacher.

There is a lot of reflection that goes into teaching; that’s a cornerstone of being a good teacher,” said Aranda. “You have to be willing to reflect, adapt and pivot as soon as you see the need. That’s also something you do in fitness training. It’s a lot of reflection and planning. We’ll plan a program for eight weeks in advance, and each day I will reflect on what worked and what didn’t so that we can modify the next eight weeks. Powerlifting gives me discipline and a physical strength that relates to my mental strength. I feel confident. I think I’ll be able to relate that when I’m teaching. If I think something is too hard, or too much of a lift, I’ll just have to set a goal and take it day by day, or hour by hour, and we’ll get there and do what was impossible to do before.”