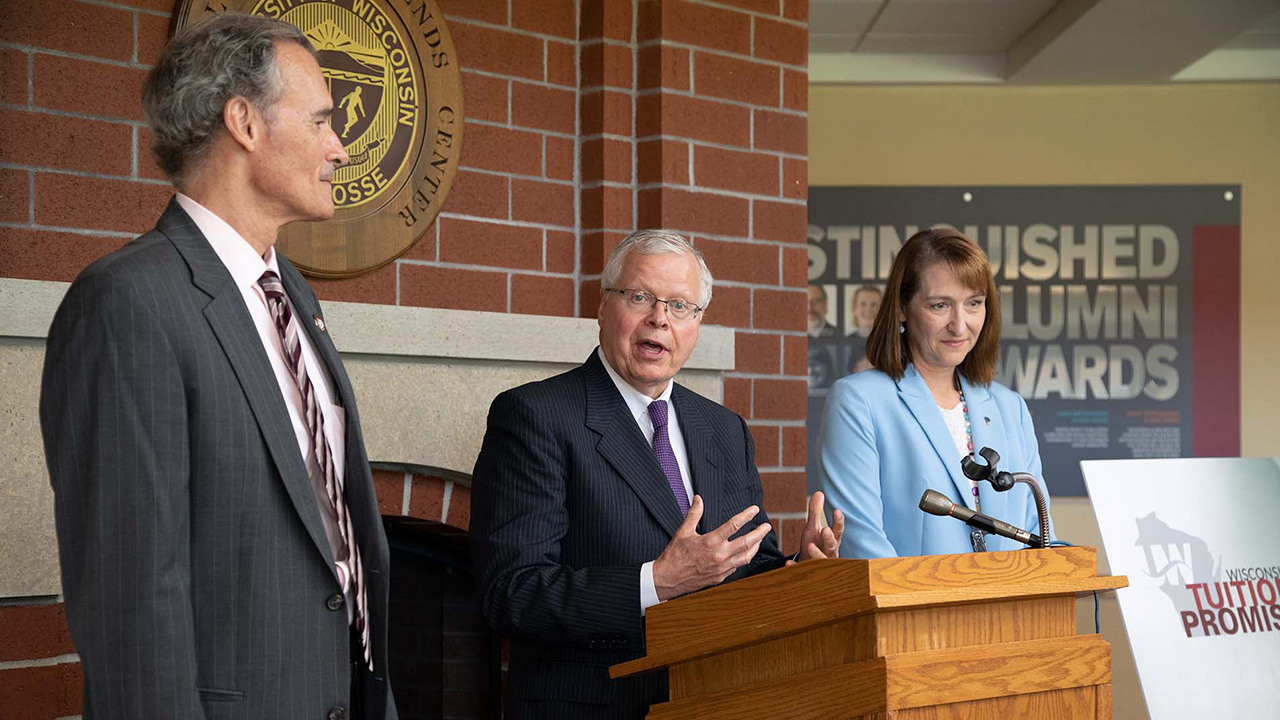 The goal of the program is to increase the number of state residents who graduate with a bachelor’s degree – especially first-generation students and those from low-to-moderate income families throughout Wisconsin – thereby improving individual lives and communities and helping meet the state’s workforce needs.

“The benefits of a college education are unassailable,” Rothman said. “A college degree needs to be within reach for every Wisconsin citizen as a path to a better life, and the Wisconsin Tuition Promise will provide these opportunities. It is also how we can close the skills gap that now limits Wisconsin’s potential to thrive in a global economy.”

“We are thrilled to offer the Tuition Promise program, which provides much-needed financial support for our future students and families,” said UW-La Crosse Chancellor Joe Gow. “At UWL, we believe that if someone has the desire and determination to earn their college degree, the cost of higher education should never stand in the way. This program is an important step toward that reality.”

“The Tuition Promise will enable even more students to study in our well-established programs and take advantage of our new state-of-the-art facilities, such as the Sesquicentennial Hall engineering building opening this fall,” said UW-Platteville interim Chancellor Tammy Evetovich. “These students will have this access to future success without worrying about affording tuition or the financial impact on their families. The Tuition Promise is a game-changer not only for these students but for Wisconsin as eventually these graduates will contribute significantly to the state workforce as leaders in their fields.”

Modeled on Bucky’s Tuition Promise at UW-Madison, the Wisconsin Tuition Promise would provide up to four years of tuition and fee funding for students coming from families earning less than $62,000 annually and enrolling at any of the other 12 public universities within the UW System. The program would be structured to provide “last dollar” financial support after federal and state grant aid is accounted for; as a result, Tuition Promise awards will vary.

Eligible students will be Wisconsin residents, first-time enrollees or transfers, and attending full-time. They will need to make sufficient academic progress each year and attest that they were employed at some point during the previous year.

Rothman said the affordability review he sought shows a UW System education is the most affordable in the Midwest and is very affordable nationally compared to peers. However, fewer low-to-moderate-income and first-generation students are attending UW System universities, suggesting that despite a tuition freeze in place since 2013, a state college education is increasingly out of reach for some, he said.

“Education unlocks success in Wisconsin,” Rothman said. “By ensuring that every Wisconsin student is given the full opportunity to get a higher education, we will improve those lives directly while building the economic engine and community prosperity that benefit all Wisconsinites.”

Students will be automatically considered for the Wisconsin Tuition Promise when they apply for federal financial aid. A full publicity campaign led by the universities will begin later this fall. Current information can be found at: wisconsin.edu/tuition-promise/

The University of Wisconsin System serves approximately 165,000 students. Awarding nearly 37,000 degrees annually, the UW System is Wisconsin’s talent pipeline, putting graduates in position to increase their earning power, contribute to their communities, and make Wisconsin a better place to live. Nearly 90 percent of in-state UW System graduates stay in Wisconsin five years after earning a degree – with a median salary of more than $66,000. The UW System provides a 23:1 return on state investment. UW System universities also contribute to the richness of Wisconsin’s culture and economy with groundbreaking research, new companies and patents, and boundless creative intellectual energy.