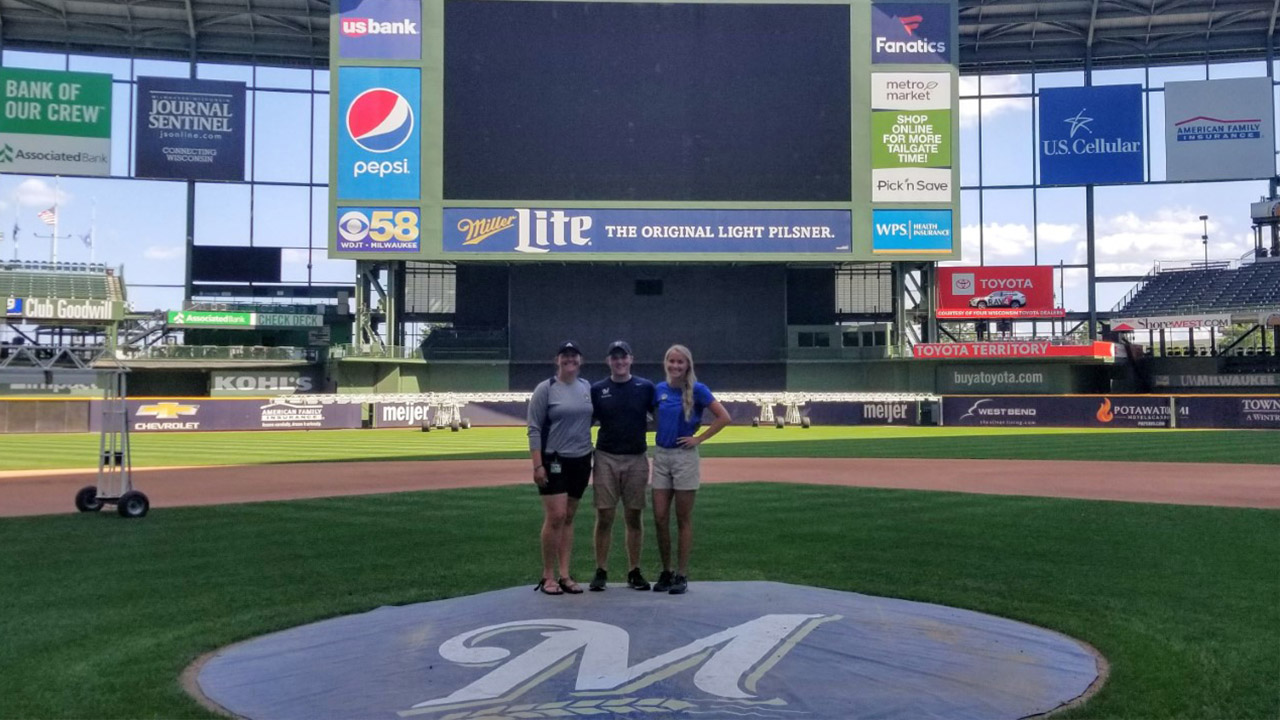 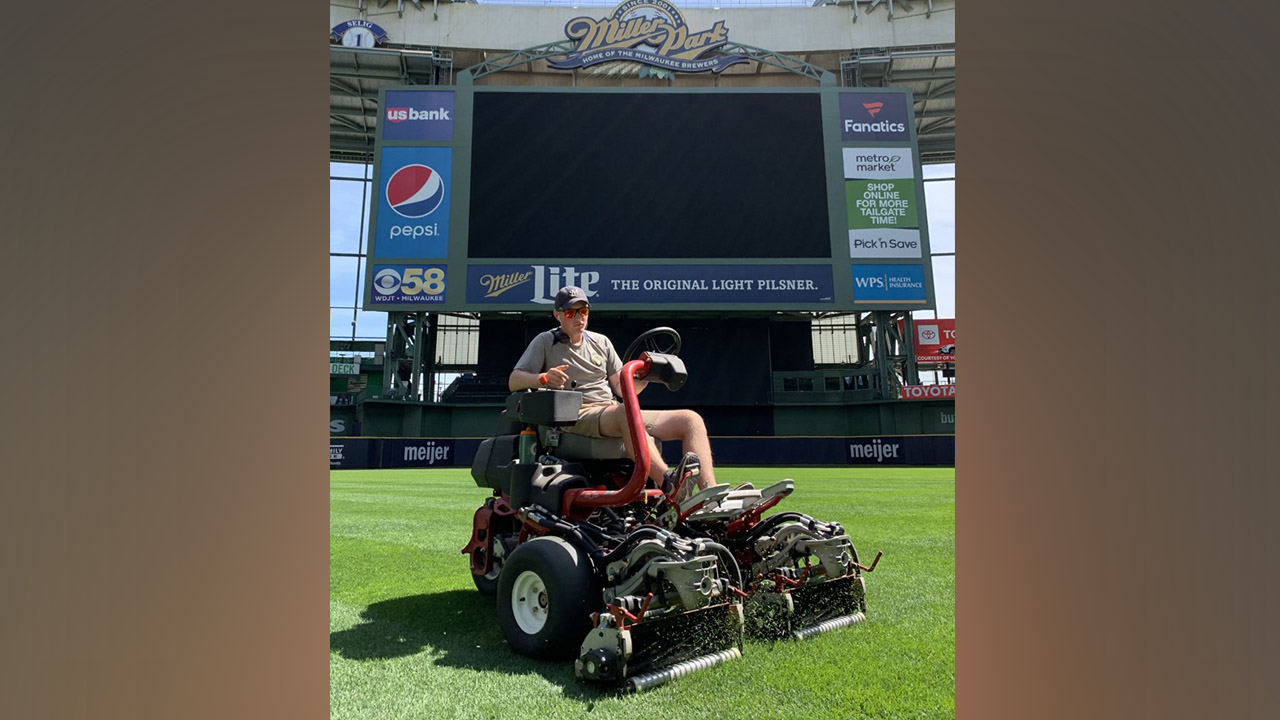 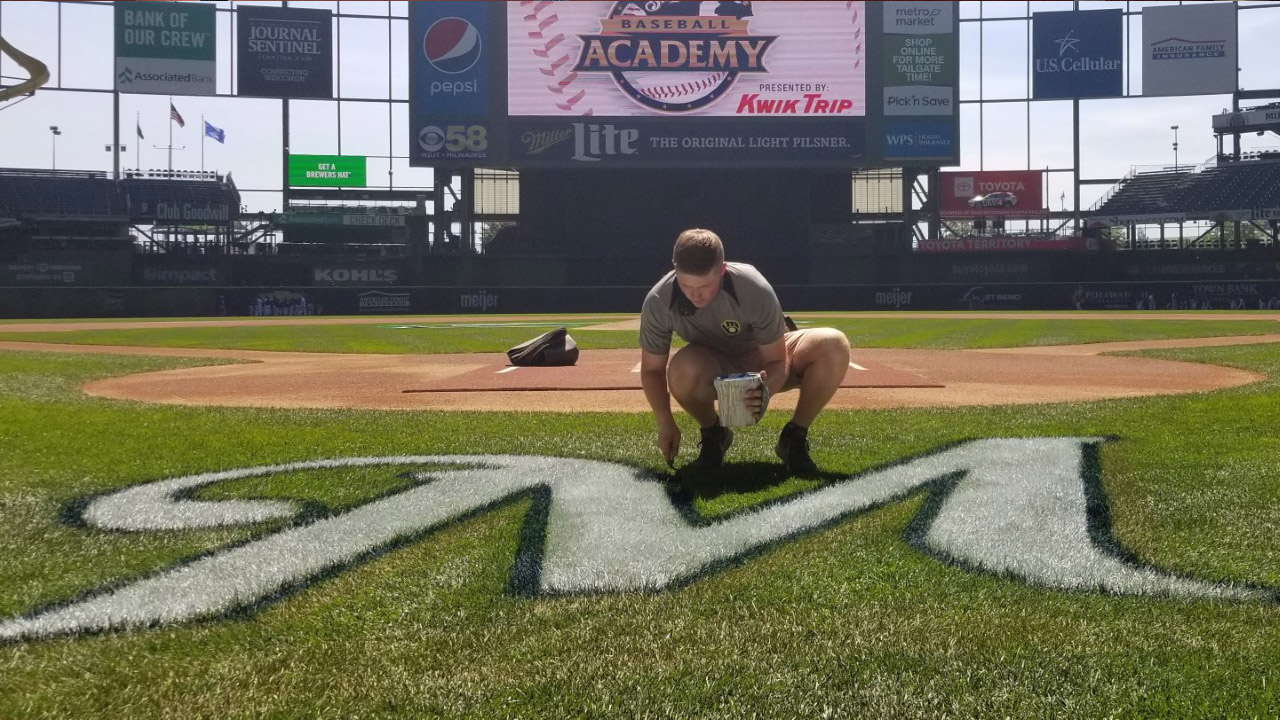 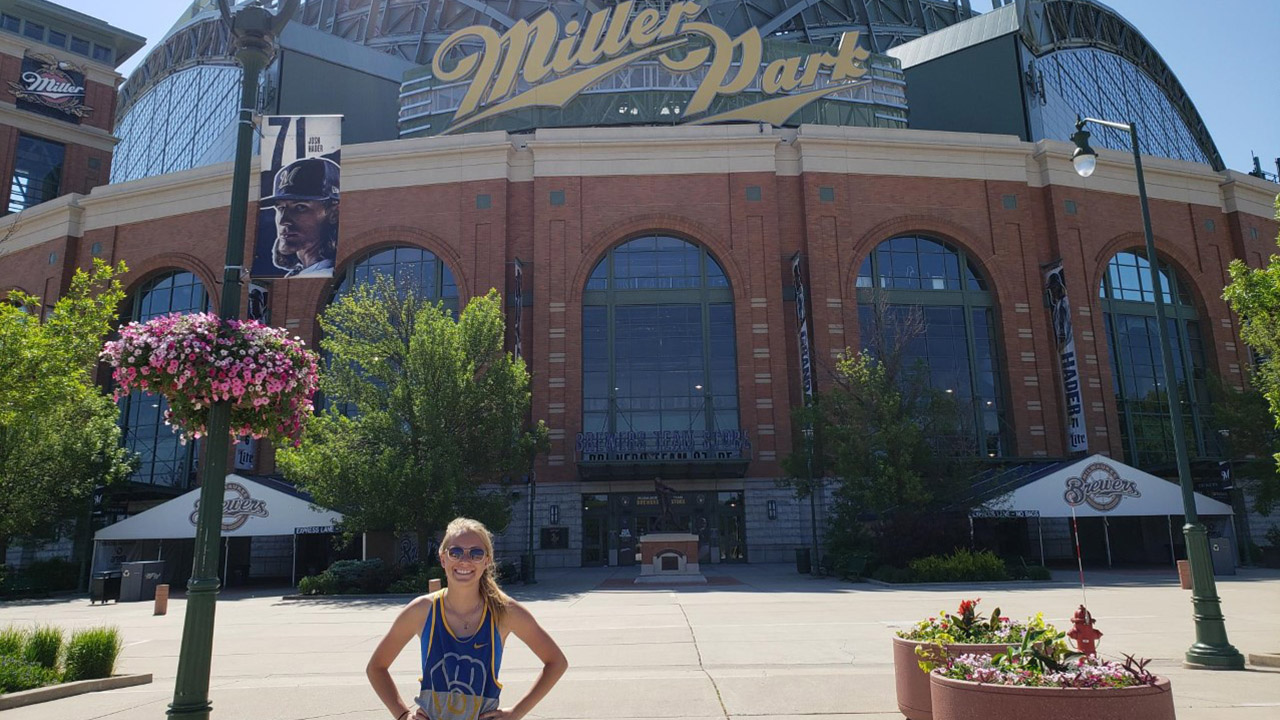 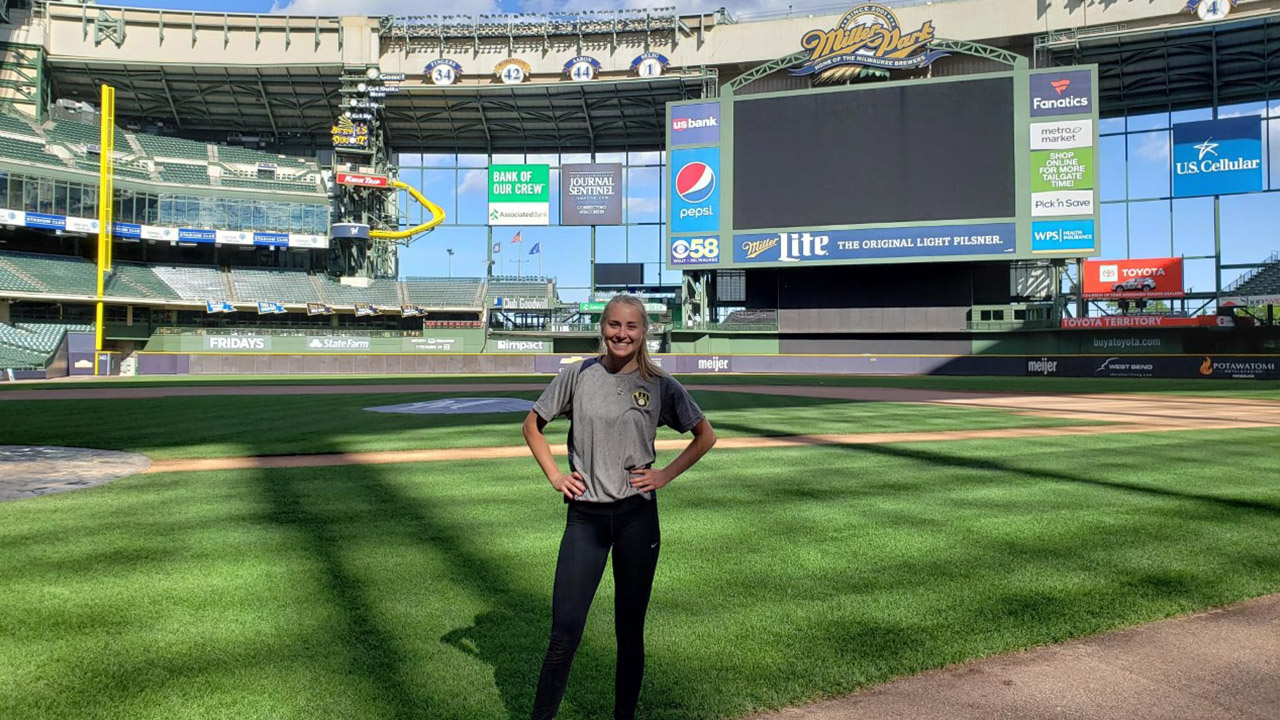 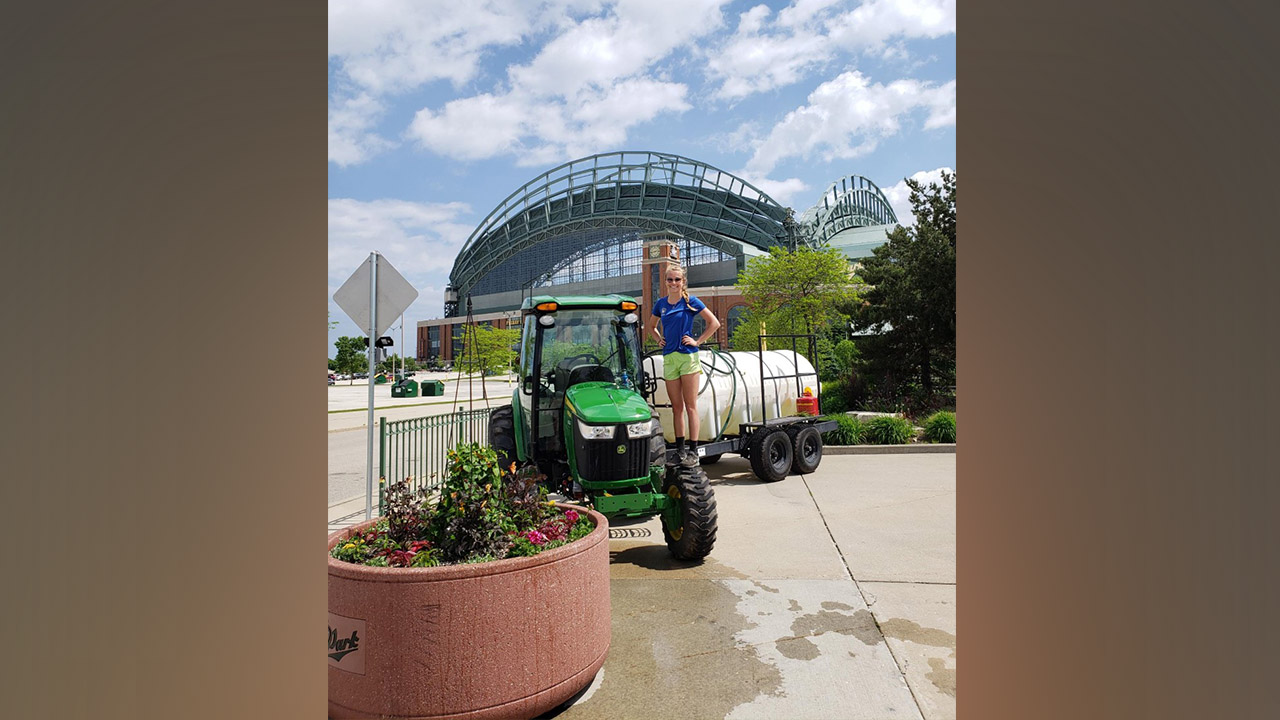 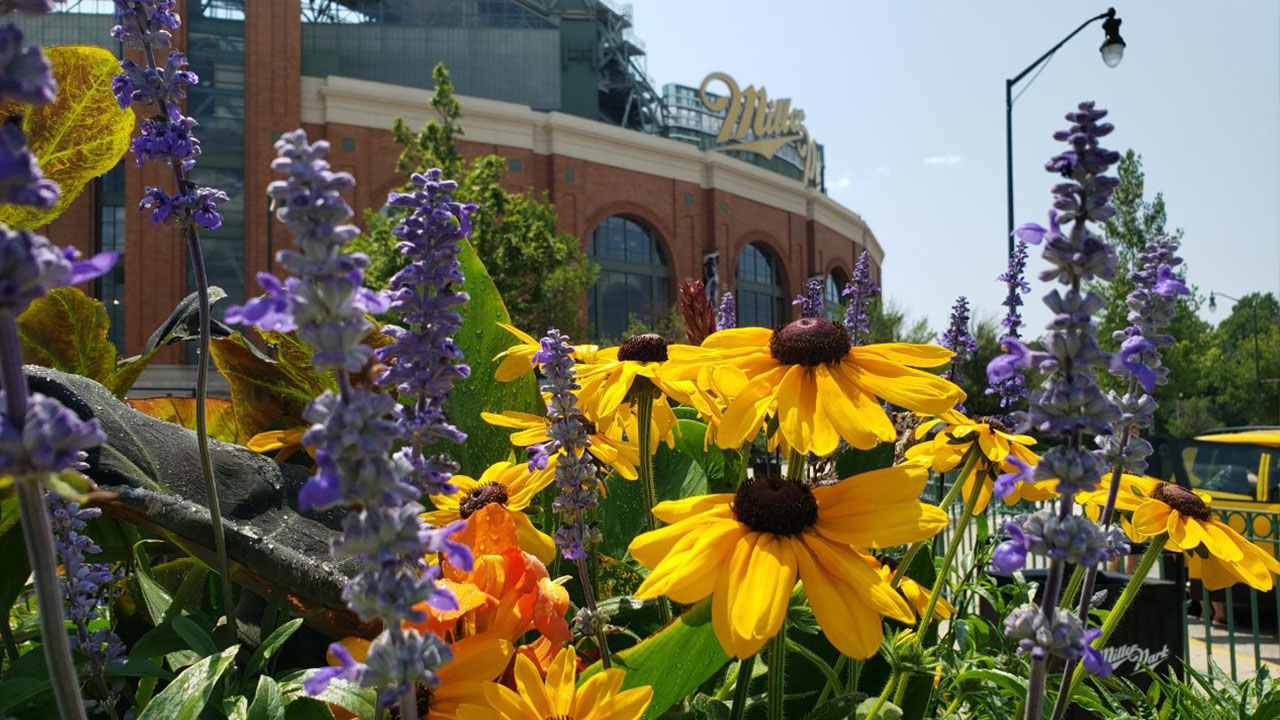 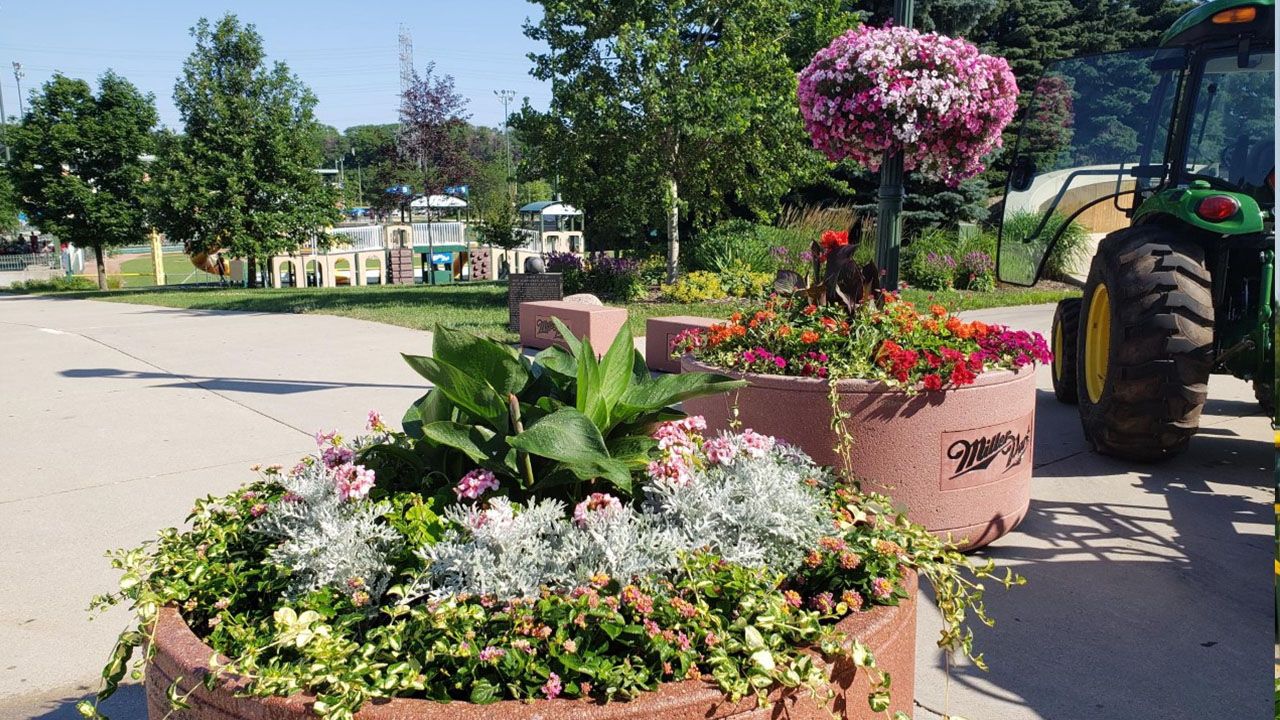 As Brewers fans make their way into Miller Park to watch their favorite player run out onto the field, they’ll notice the work created by three University of Wisconsin-Platteville students. This summer, Abigail Rosenau, Gabriela Strobel and Nick Quarberg interned with the Milwaukee Brewers ground crew. Together they experienced what it takes to uphold one of the best stadiums in major league baseball.

Quarberg was hired as a field intern and worked under the direction of the groundskeeper. The La Crosse, Wisconsin, native is a senior majoring in environmental horticulture at UW-Platteville.

“On non-game days I would replace sod, do a lot of clay work and infield work. There were a few bigger projects; we replaced half the outfield with sod in early June,” said Quarberg. “On game day, we would do a lot of clay work with patching the bullpen, home plate and the pitcher mound. I got to mow sometimes and paint the logo behind home plate.”

Strobel, a junior from Sun Prairie, Wisconsin, is double majoring in soil and crop science and reclamation, environment and conservation. She was hired by the organization as a landscape intern. Her responsibilities included maintaining and prepping the grounds for fans.

“I was mostly in charge of doing a lot of the watering,” Strobel said. “We used a water wagon with a John Deere tractor pulling a big water tank. We went around and watered everything. It was one of my most favorite parts because I designed everything in the annual pots and then I went around and saw them grow over the days.”

When the students walked through the door at Miller Park on their first day, they were surprised to see fellow Pioneers. “The Brewers organization is pretty large, so to have three of us there this summer was pretty cool,” said Quarberg. “I was working with other interns from Iowa State and Texas A&M. You have these large schools represented and then you have UW-Platteville, a smaller university. I think it’s cool that three of us from an in-state school worked for a team in the state.”

“I was really proud to represent the university and tell everyone I’m from UW-Platteville,” said Strobel. “I’m proud of Platteville and I’m proud of the school that I go to not only for the teachers, but for the hard-working students that go here.”

Quarberg and Strobel said they felt prepared to work for the MLB thanks to their education. “I would not have been able to contribute to conversations without the classes I have taken,” said Strobel.

“A lot of my classes in the horticulture program have shown me general practices I could apply, but I got to fine-tune those skills on site,” said Quarberg.

As the students reflect back on their time with the Brewers, Strobel said she received valuable experience working with a variety of people in different areas of expertise.

“I was working with either two or three people every day that were different,” she said. “I learned how to interact with people and how to handle certain situations depending on what they’re good at, their background and how much experience they had. It was a good experience for me to broaden my horizon from that perspective.”

“I learned to uphold the safety, aesthetic values and the playability of a major league baseball field and how intricate it can be,” said Quarberg. “It’s a really intense process and I’m really glad I had the opportunity to understand what goes into doing that.

As the students received hands-on experience, they also received a few perks. For Strobel it was seeing and talking to players as people and not just professional athletes. “I like to say they wouldn’t have their job without us and we wouldn’t have our job without them. It’s kind of crazy to say I worked with them,” she said.

“As a staff, we got to go to Wrigley Field to watch the Brewers play the Cubs,” said Quarberg. “We got to go on a (Miller Park) roof tour, walk across the roof on the inside of the stadium, go outside around the sign in front of the building and go down Bernie’s Slide. For all the hard work we put in it was rewarding.”