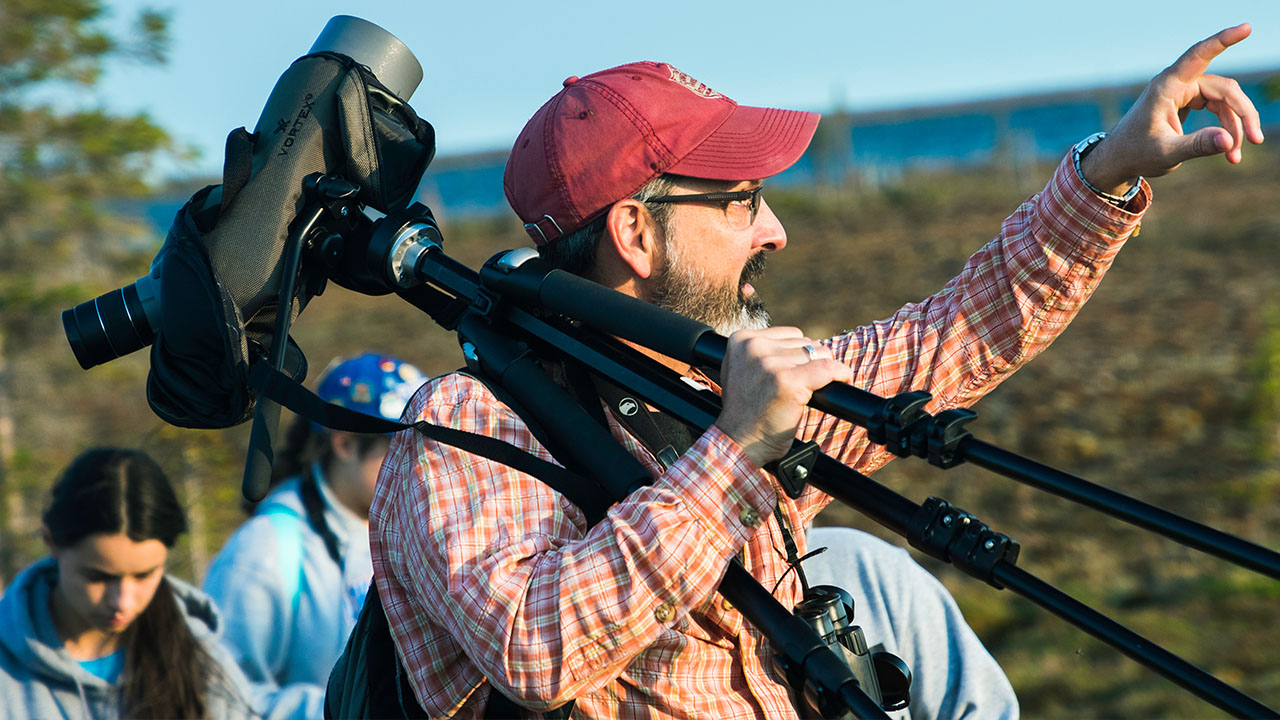 Dr. Jeff Huebschman joined UW-Platteville in the fall of 2003. A Nebraska native, Huebschman has always enjoyed being out in nature. This love for the outdoors would soon turn into a career as he began to consider his natural surroundings on a deeper level.

Huebschman teaches Mammalogy, Ornithology, Ecological Methods and Research and Diversity of Life at UW-Platteville. In addition, he also leads a study tour focused on sub-arctic ecology that is based out of Churchill, Manitoba, on the shores of the Hudson Bay. More locally, Huebschman aims to increase awareness of many of the organisms that reside in the Driftless region of Wisconsin in his classes.

For over a decade, Huebschman and his students have studied bat populations in Southwest Wisconsin. In his recently published research, he reports a significant decline in the region’s most common bat species due to white-nose syndrome. Huebschman received his bachelor’s from Concordia University, Nebraska, his master’s from the University of Nebraska-Omaha and Ph.D. from the University of Nebraska-Lincoln.

How did your interest in biology begin?

I would attribute it to a few key teachers along the way. My main interest within biology is in the ecology end of things and good old-fashioned natural history. I was always a kid who enjoyed kicking around outside and being in nature but didn’t necessarily place my interests within the context of science or biology. I had a very good high school biology teacher who was passionate about his subject and did some great stuff in the classroom. He got us out into the field where we did plant collections, observational studies, and even introduced us to small mammal live-trapping. I know I saw my first live shrews in his high school class. He also mentored a group in independent research, and it was there that I got my first exposure to scientific research and writing. As an undergrad, I had a professor whom I worked for in the summers doing bird research. He also led a study tour annually to Belize, which I participated in my freshman year that was incredibly eye-opening.  He was also simply a passionate teacher and became a significant mentor. It was as a graduate student that I was introduced to bats, through another outstanding professor who also became another significant mentor.

What are some things you wish people knew about your field of study?

All of us, to varying degrees, walk through life blind to much of the world around us. And I think that all of us that are teachers try to remove some of those blinders. In my classes, I enjoy opening up the nearby world of nature to my students. Whether that is teaching students to identify common birds by ear — birds that they’ve probably heard singing their entire lives — or through simply making impromptu biological observations while out in the field with students, I try to get students to notice the local natural world.

On Fridays in my Diversity of Life class, I start class with something called “Fun Foto Friday” where I show a couple of photos of some sort of organism. Frequently, the organism pictured can be seen on campus or, at least in the area, and I encourage students to go outside and attempt to see these things for themselves. Regardless of their individual career path after college, I hope that all of my students take with them an increased awareness of the natural world that is right outside their door.

Do you have any students engaged in research right now?

I have two groups of students working on projects right now. One is a project a student brought to me. She works for a wildlife rescue center and they take in a lot of baby rabbits over the summer. She was interested in the survival rates of these rabbits and wanted to find ways to increase them. She developed the idea of creating a separate, quiet housing room for these rabbits and hypothesized that they would experience a lower stress rate than in their usual housing arrangement (where rabbits are housed with everything else that comes in to the shelter). Stress hormones will be measured in rabbits from the two groups, which is being done by examining hormone levels detected in their feces by an epidemiology lab at the St. Louis Zoo. She’s currently waiting for results from the zoo. Her findings could change the procedures of this wildlife facility.

I have another group of students studying a small population of southern flying squirrels on campus. One of my students last year found this population of squirrels while conducting her own independent research and we knew that we had to develop a separate project focused specifically on these amazing mammals. I’m happy to report that we’ve successfully live-trapped and radio-collared one squirrel so far, but the students involved in this project are finding out just how challenging this work is. It takes a lot of effort to successfully find and catch rare mammals.

What do you hope your students take away from your classes?

It depends on the course. All of us in the Biology Department want our students to understand what biology is and isn’t. Biology is a data-driven field and understanding how to collect, analyze, and interpret data is something that we want our students to be able to do. In some of my upper-level courses, like Mammalogy or Ornithology, I also want to give them a toolkit of skills that can make them competitive for something like a seasonal field job that can then springboard into something bigger down the road. That can include things like live-trapping techniques, radio telemetry, or learning birds by sight and sound. Also, quite simply, I want them to be observers of nature.

What kind of research projects have you been involved with recently?

I’ve been involved in long-term research on our area bat populations. Recently, I’ve had two papers published — one of those led by an undergraduate — on this bat research. Long-term research in ecological fields is important and being at a school like UW-Platteville has allowed me the luxury of time to pursue this type of research. I’ve also been able to involve many students in this project over the years. Separately, I also have a passion for the far north and have been enjoying learning more about the ecology of the sub-arctic. I’ve recently spent a fair bit of time at the Churchill Northern Studies Center (also as part of my sabbatical year). I have enjoyed taking UW-Platteville students to this research station, which serves as our base for an on-site ecology class focused on the sub-arctic.

To nominate someone for the Pioneer Spotlight, contact pr@uwplatt.edu.