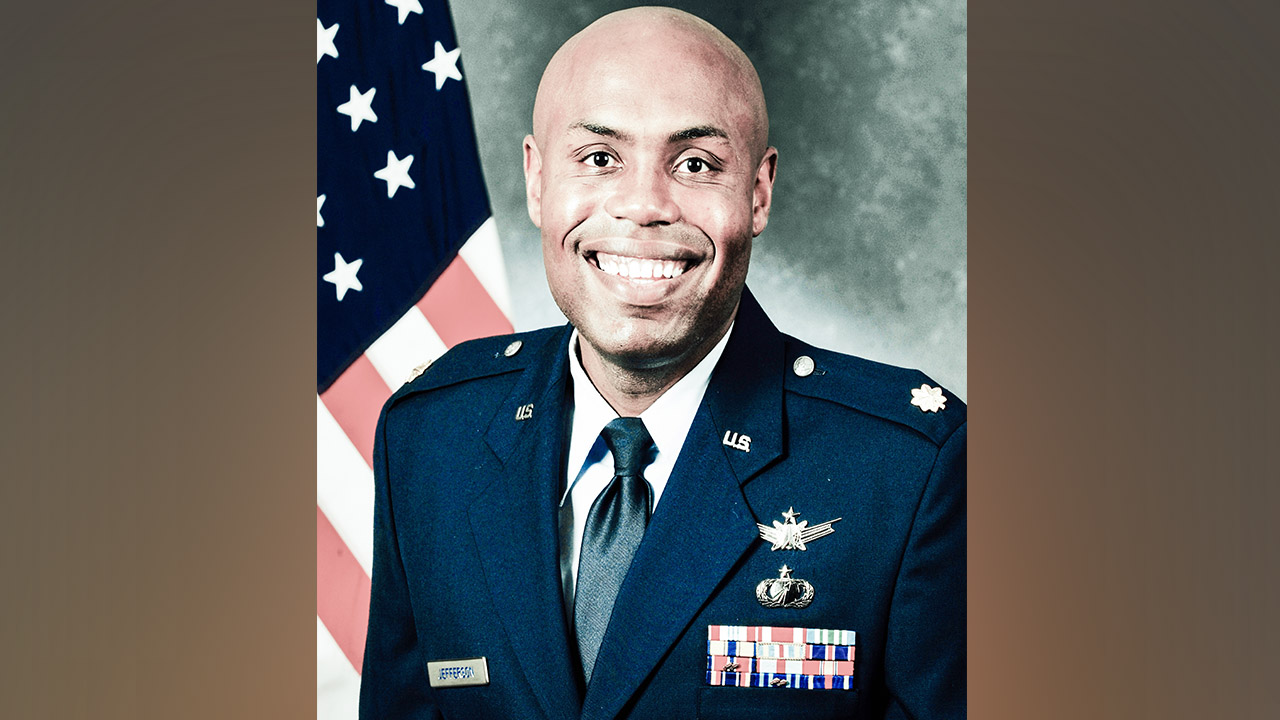 While an undergraduate student at the U.S. Air Force Academy, Christopher Jefferson fell in love with the thought of working in the space launch industry. This simple idea would launch his academic and professional career to outstanding heights.

Eighteen years and three master’s degrees later, Jefferson now commands the launch operations division of the National Reconnaissance Office (NRO), an agency within the National Intelligence Community based in Chantilly, Virginia. As the position’s name suggests, Jefferson is in charge of all space launch operations and mission integration for the nation’s spy satellites.  It’s a giant responsibility, made even more impressive by the fact that Jefferson – a Lieutenant Colonel – is the most junior officer in the agency’s history to become mission director for a multi-million dollar national security space mission.

Jefferson made history on July 15, 2020. That was the day NRO Launch-129, a vitally important intelligence satellite, launched from Wallops Island, Virginia.

“Launch is a team sport, but being a mission director means you are ultimately responsible for ensuring that satellite reaches orbit,” said Jefferson. “The fact that the director of the NRO and the director of the Office of Space Launch trusted me with that responsibility is so humbling, but what makes it truly special for me is knowing that our satellites are saving American lives each day. That is what motivates me. My mission director plaque will always be my centerpiece because I know we made a real difference in the world.”

In addition to serving as mission director for NRO Launch-129, Jefferson also led all space launch operations for the remaining NRO launches. At the beginning of 2020, the NRO had the ambitious goal of launching nine satellites across multiple countries, a prospect that involved working with numerous industry partners and five government agencies. The NRO and Jefferson had never attempted such a feat before, and as a result, the year 2020 was set to be the most difficult launch campaign they ever faced.

“We had no idea how we were going to get through such an aggressive manifest, and just when we thought things couldn’t get any more difficult, the pandemic struck,” Jefferson explained.

COVID-19 changed the guidelines for how Jefferson and his team could operate, but even when he was working seven days a week and utilizing only a third of his available staff, Jefferson kept plugging away.

“Standing down was just not an option,” said Jefferson. “It was painful, and our teams were exhausted, but our nation needed those satellites in orbit. I’m just honored to work with real American heroes every day. These people – contractors, government and military personnel – routinely miss birthdays, holidays, and anniversaries without complaint, because they know what we are doing protects those same liberties for every other American.”

“While attending UW-Platteville, I received nothing but support from some of the kindest and most intellectually-driven individuals I’ve met. I just want to give a genuine thank you to the university for creating that environment."

In addition to keeping our country safe, Jefferson’s work paid off in other ways. The successful launches not only earned Jefferson recognition in his field, but also a nomination for the University of Wisconsin-Platteville’s Outstanding Alumni award. Graduating from UW-Platteville in 2008 with a Master of Science in Engineering, Jefferson believes a sound academic foundation led to his current professional success and is grateful for all the support he received along the way.

“While attending UW-Platteville, I received nothing but support from some of the kindest and most intellectually-driven individuals I’ve met,” said Jefferson. “I just want to give a genuine thank you to the university for creating that environment. I’m a firm believer that the environment you set is important for the success and growth of not just yourself, but also your team.”

Training and maintaining his current team is a top priority of Jefferson’s moving forward. Aware that many millennials tend to jump around in their careers, the UW-Platteville alumnus is working to grow and retain the future engineers and managers within the industry he loves. It’s a task not without its difficulties, but Jefferson hopes a passion for the space field will spread to the next generation – just as he first caught it when he was younger.

“Space is our future,” Jefferson said. “The vastness of it alone has to convince you that we’ve barely scratched the surface. Because of that, I really want to encourage younger people to stick around and really learn this craft because I just think it’s immensely important.”

When not focusing on space, Jefferson’s children are his world. Despite his many successes, Jefferson says his proudest life accomplishments are his kids, and that his greatest reward is watching them grow up. It’s undoubtedly a sentiment shared by many across the nation, and one that’s made even more secure thanks to the tireless efforts of Jefferson and his team.