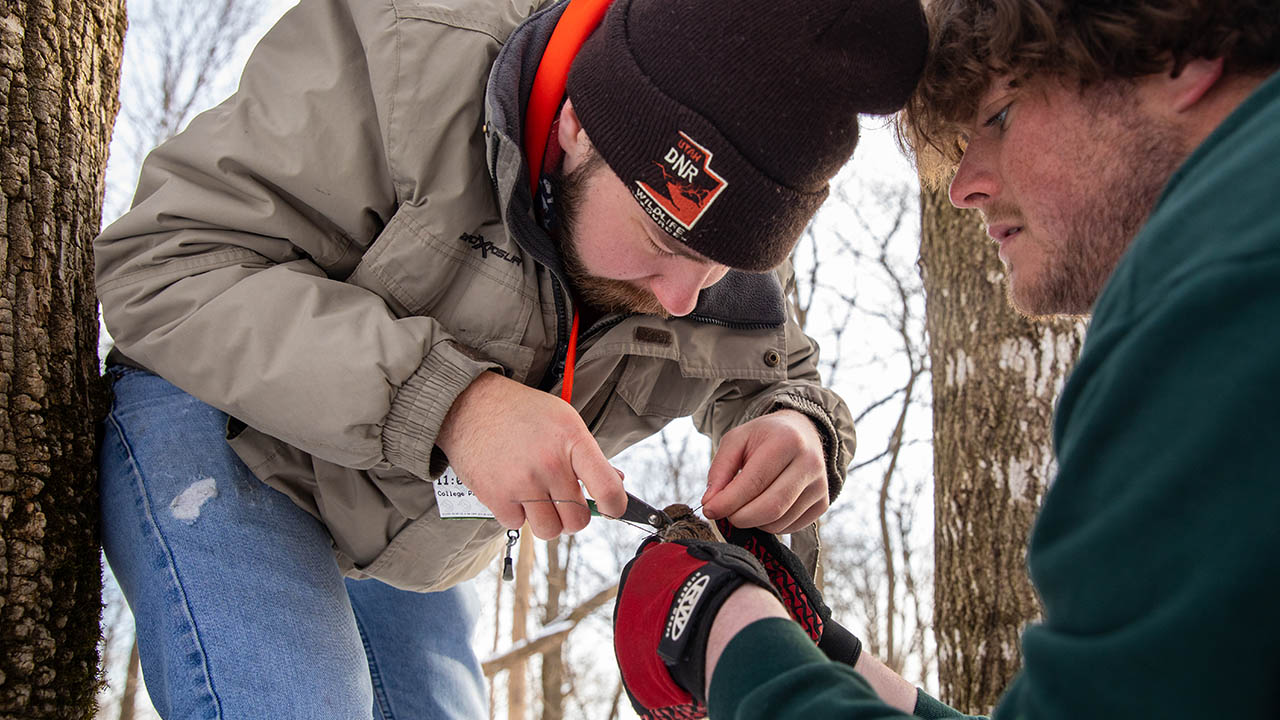 Pictured left to right are Nick Nelson and Jack Rasmussen. 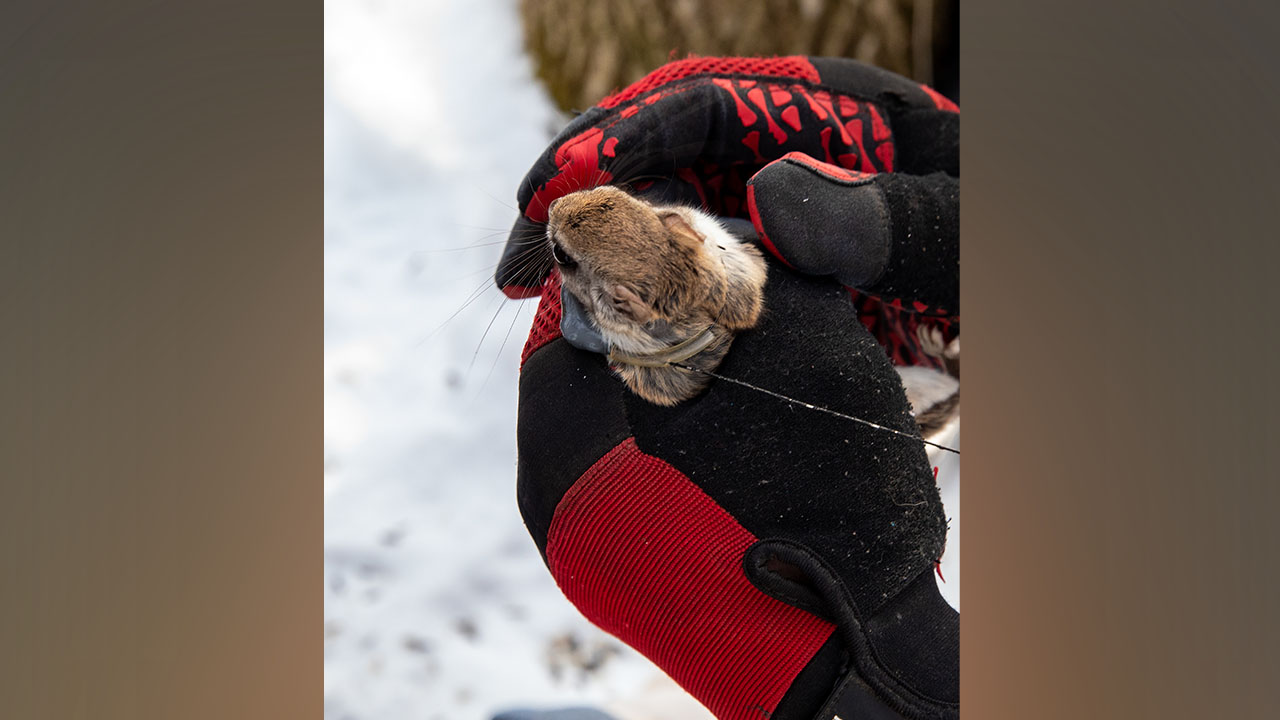 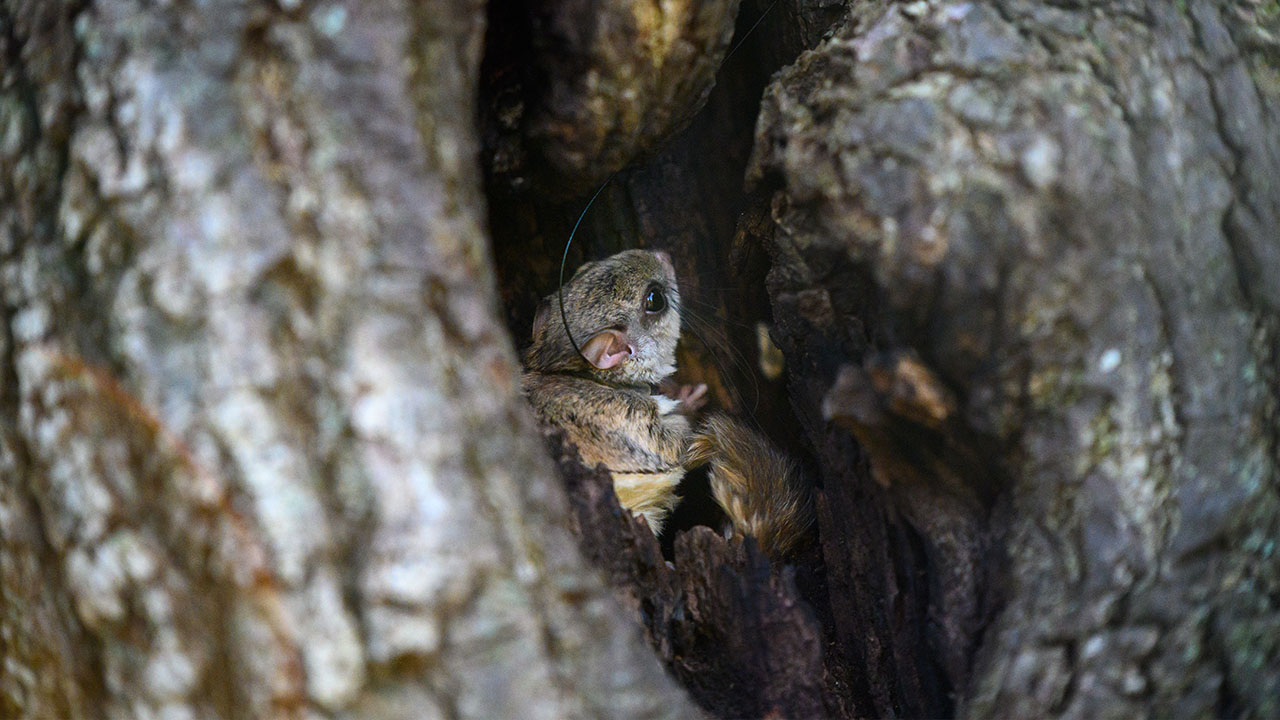 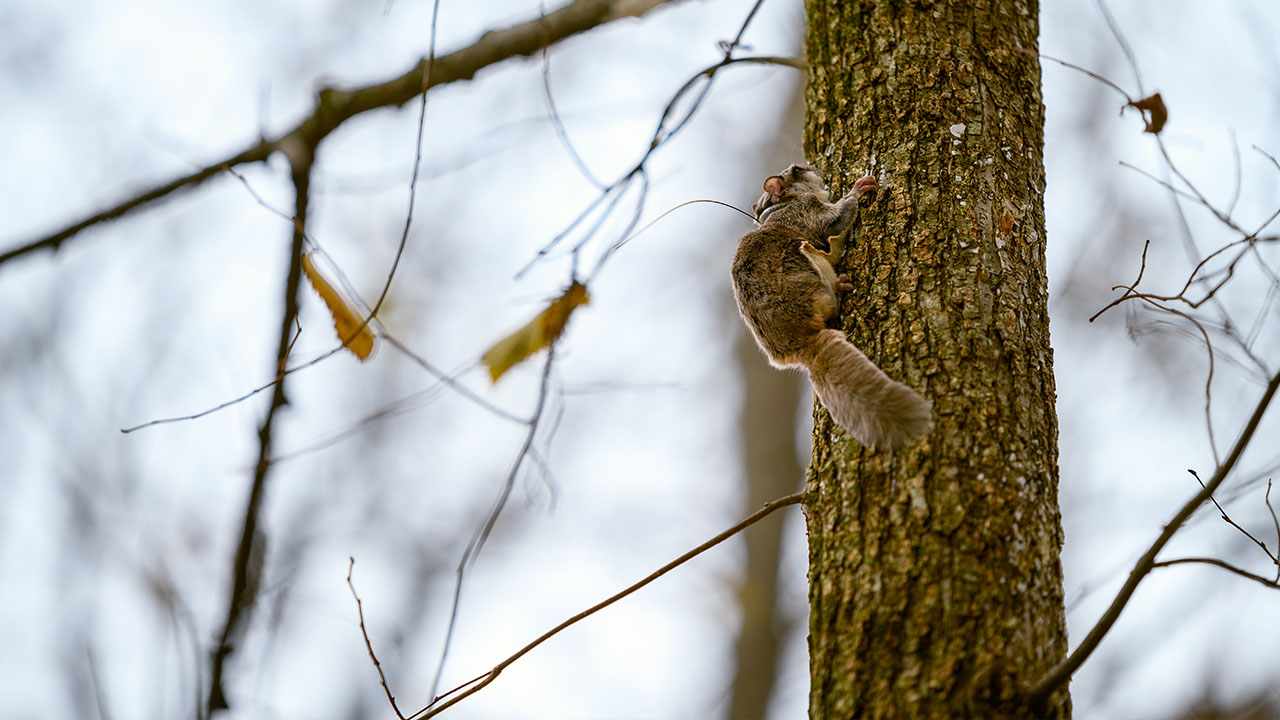 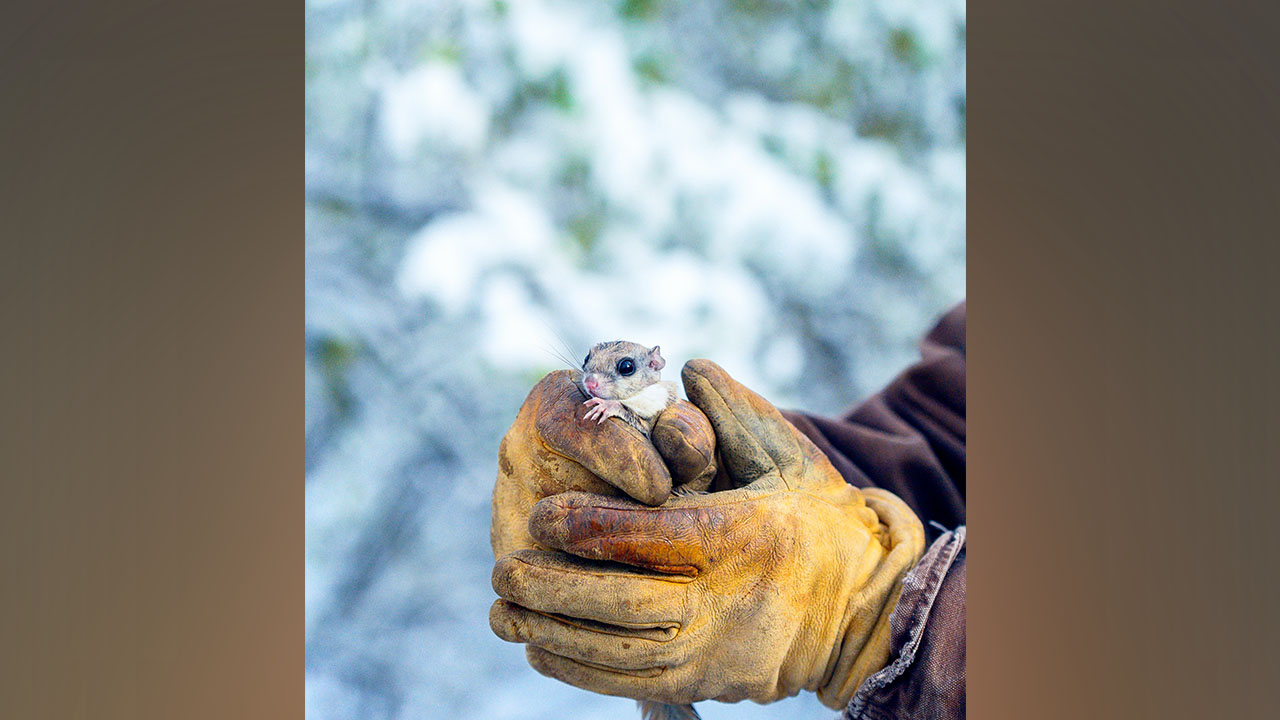 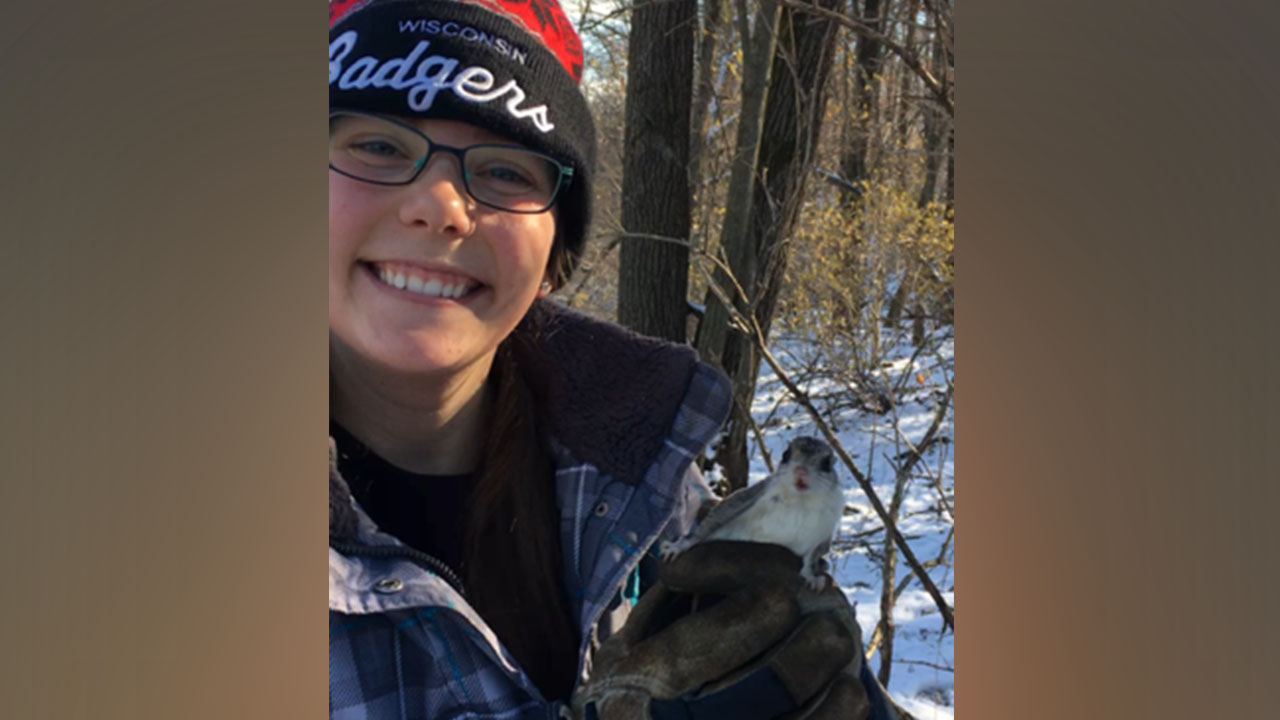 In the fall of 2018, a former UW-Platteville student — Julie Benzschawel – happened to find a flying squirrel in UW-Platteville’s Memorial Park while conducting a different research project.
❮ ❯

Students and faculty at the University of Wisconsin-Platteville are researching an animal that some Platteville residents might be surprised to learn they have in their own backyard – the southern flying squirrel. Biology students Nick Nelson and Jack Rasmussen have been documenting roost sites and determining the home range of flying squirrels, as well as investigating their movement and behavior patterns.

This nocturnal species of squirrel is known for its ability to glide in the air, giving the appearance of flying, with the aid of a membranous structure between its front and back legs. In the fall of 2018, a former UW-Platteville student — Julie Benzschawel – happened to find a flying squirrel in UW-Platteville’s Memorial Park while conducting a different research project. UW-Platteville Professor of biology Dr. Jeffrey Huebschman – who, prior to this, had never found a flying squirrel in Wisconsin himself – has since led additional students in documenting more about this animal.

Students partnered with the Wisconsin Department of Natural Resources, through an on-campus community grant, in order to secure radio collars. The first step, last fall, was to confirm there were still flying squirrels in the area. The students mounted trail cameras and set pre-baited traps. The study location included area surrounding Pioneer and Southwest roads and the area directly south of Parking Lot 28, by Southwest Hall.

“Eventually, we were able to see they were still in the area, when we got some pictures on the trail camera,” said Huebschman.

Nelson and Rasmussen used different styles of live-traps and different placements of traps in their initial efforts to capture squirrels.

“During the first few weeks of trapping, nothing was going in the traps,” said Huebschman. “Then the students came upon a technique of putting a live-trap into a wooden box and mounting the box in a tree. Flying squirrels are cavity dwellers, so the wooden box seemed to be the factor that made the difference in their success rate.”

The students fitted the squirrels with radio collars, which send out a frequency the students can then pick up with a receiver to track their location. Nelson and Rasmussen tracked for 16 days and seven nights and were able to catch, collar and release four flying squirrels, while observing additional ones. They documented eight roost sites.

“When I first started, I never knew that the state of Wisconsin had flying squirrels, because they seem so exotic,” said Nelson, who is a senior from Richfield, Minnesota. “I was surprised that we had them, and that is a lot of other people's reactions too when they hear about our project. The reason why people think of them as so exotic is because they have a tendency to hide during the day; they’re our only truly nocturnal squirrels. I think the coolest part is seeing people's reactions when they hear ‘flying squirrel.’ A lot of times, they have never seen or heard of them, and by the end of our presentation, they tell us ‘I have to see if we have them in our yards.’ It is cool seeing people taking more of a particular interest in such a unique species and helping to preserve them as well as their homes.”

While the end goals of the research project were to learn more about the flying squirrels’ movement patterns, home range and roosting sites, Huebschman explained that just as important was learning how to study the species itself.

“I think we’ve been successful in figuring out how to study them,” said Huebschman. “Now, I feel like we have an approach to use.”

The students recently tested their approach at the “M”, where there had previously been no reported findings, and have caught three flying squirrels.

Huebschman said that having this successful approach to studying flying squirrels opens up a number of future opportunities for research projects, potentially ranging from investigating the attributes of roost trees to exploring other ways to use technology to tag the species, and more.

Regardless of the direction of the future research, Huebschman noted that the process itself has been of significant value to the students.

“Because UW-Platteville is a teaching school where research activities are also student-focused, the skills that students gain through this research that can make them more competitive for graduate school, or field-based employment, are just as valuable as our research results,” he said.

Rasmussen, a senior from Galena, Illinois, added, “The research opportunity that we have had over the past year has allowed me to pursue something that I am truly passionate about, the outdoors and conservation, as well as develop my skill set as a biologist. In classes, we cover telemetry, trapping, camera surveys and mapping. Doing field research allows us to deepen that knowledge that is touched upon and apply them to real world questions. Over these past months of research, we have had obstacles, promoting creative solutions and problem solving. Currently I am in the process of applying to graduate school, and the skills that I have developed through this research experience are excellent resume builders to help give me a leg up in a competitive environment.”