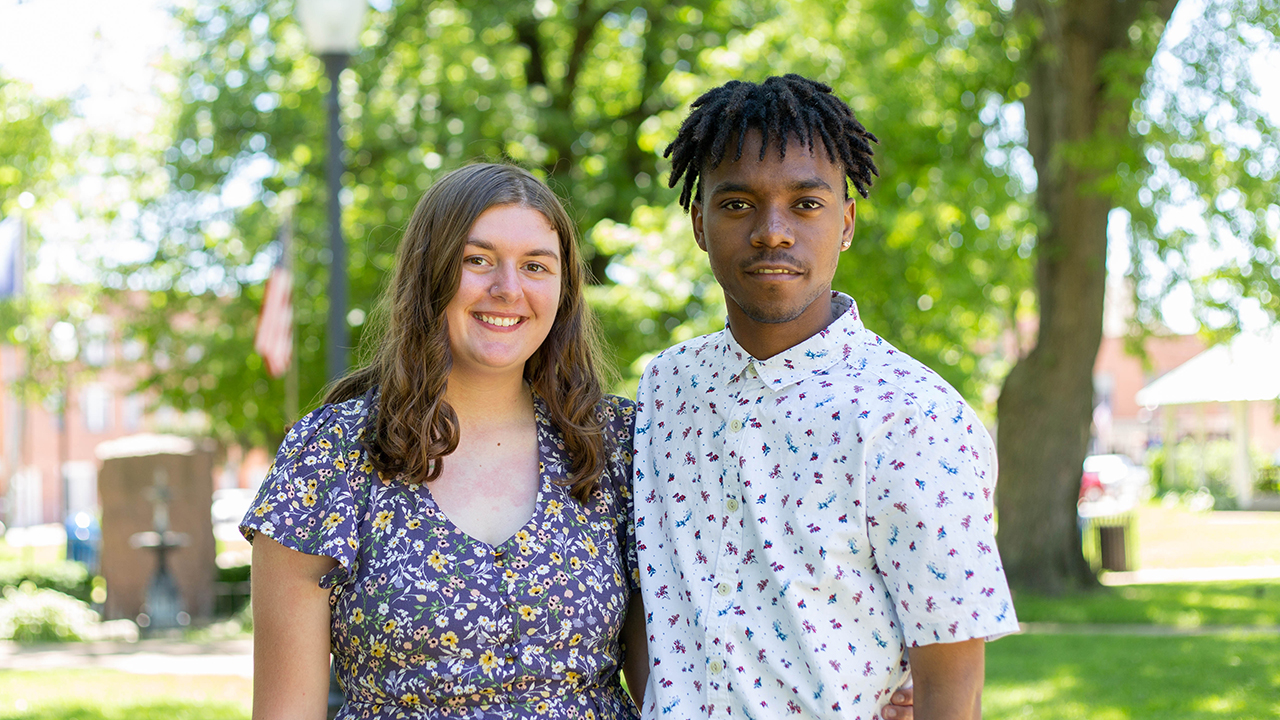 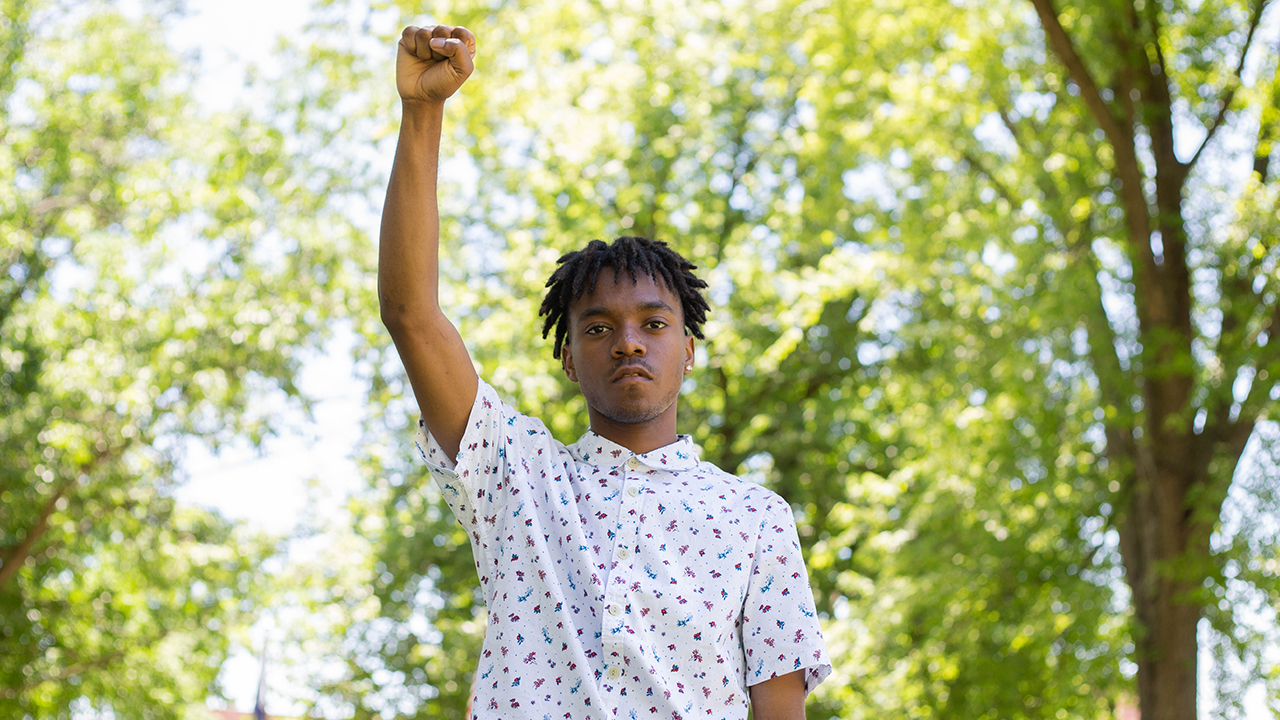 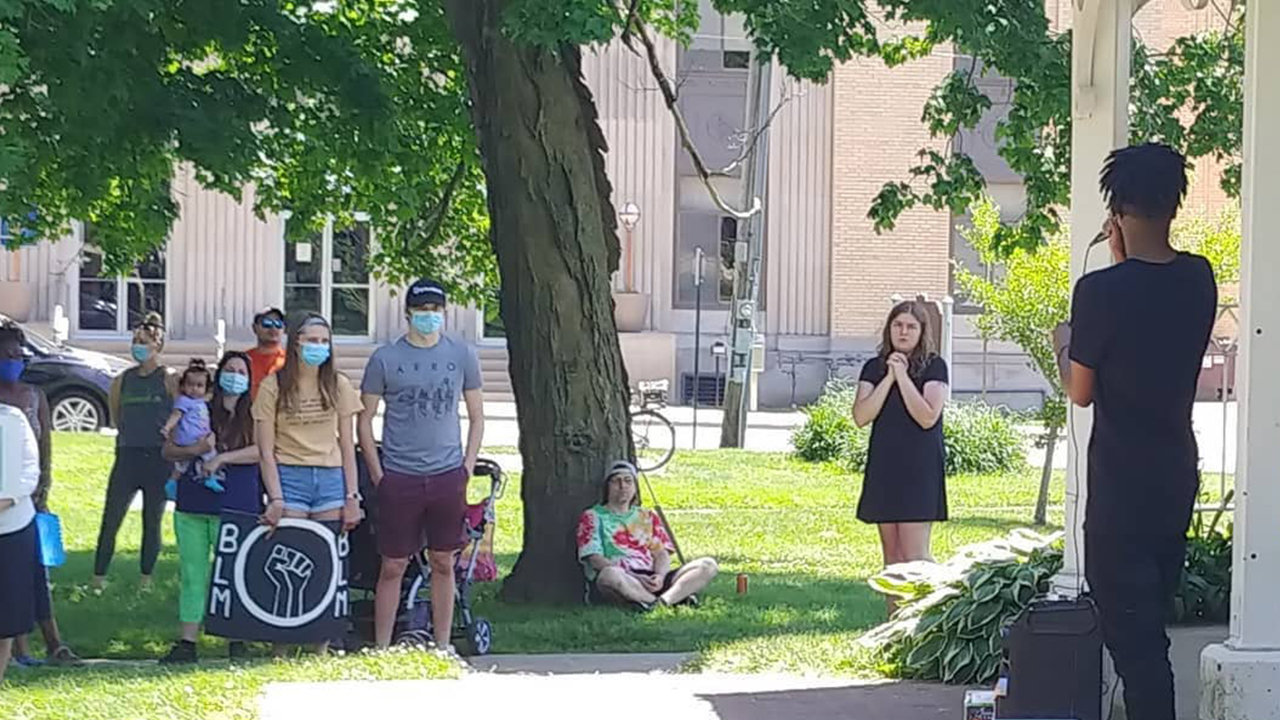 Alvin Watts speaks at the peaceful protest he organized at City Park in Platteville on June 7.
❮ ❯ 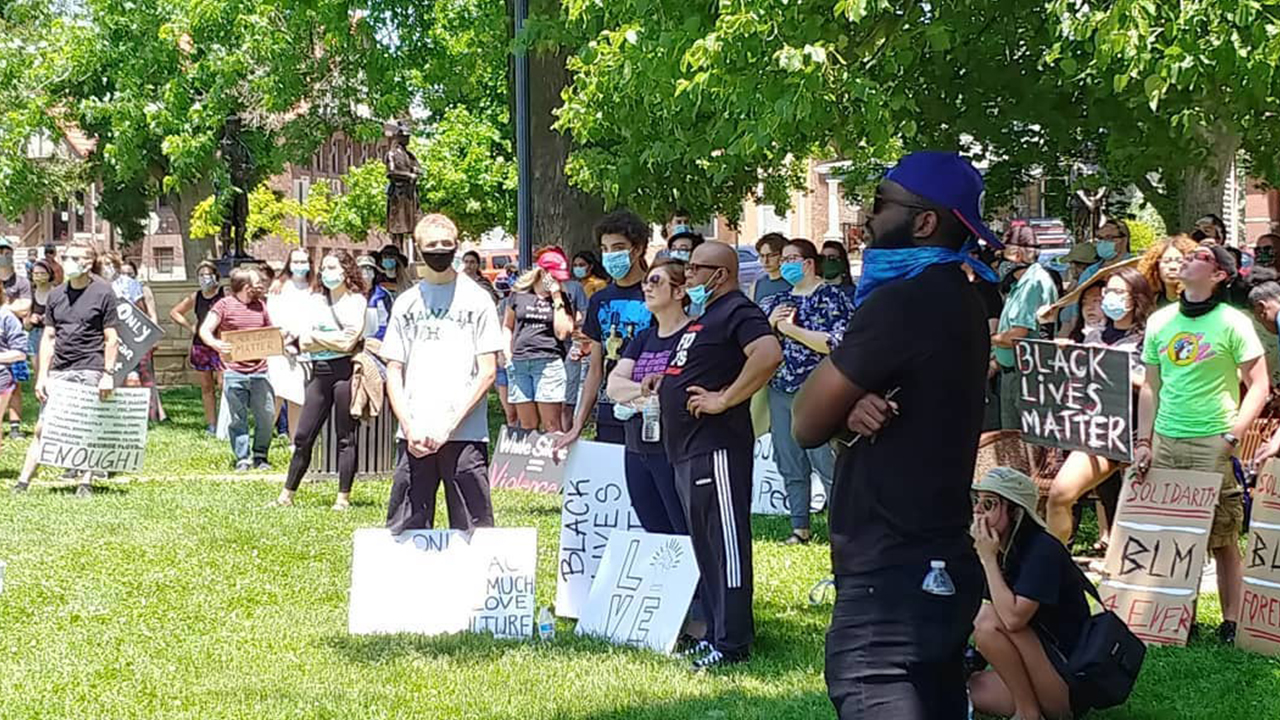 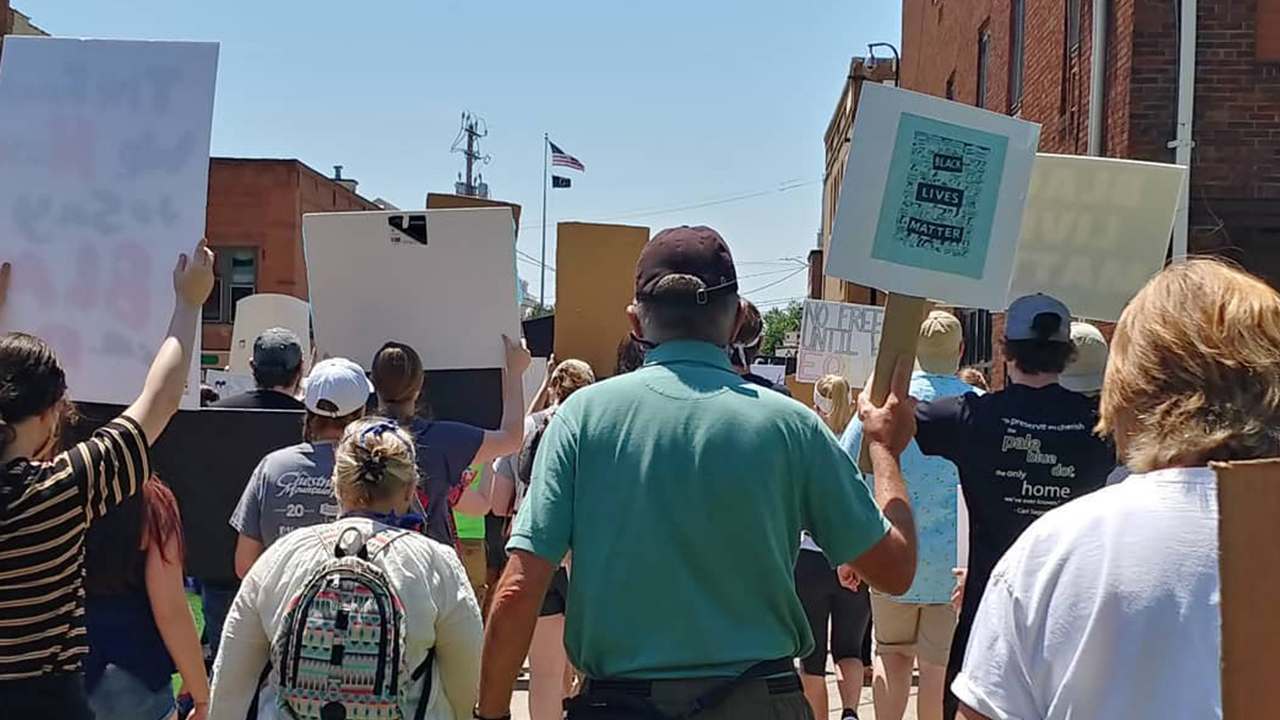 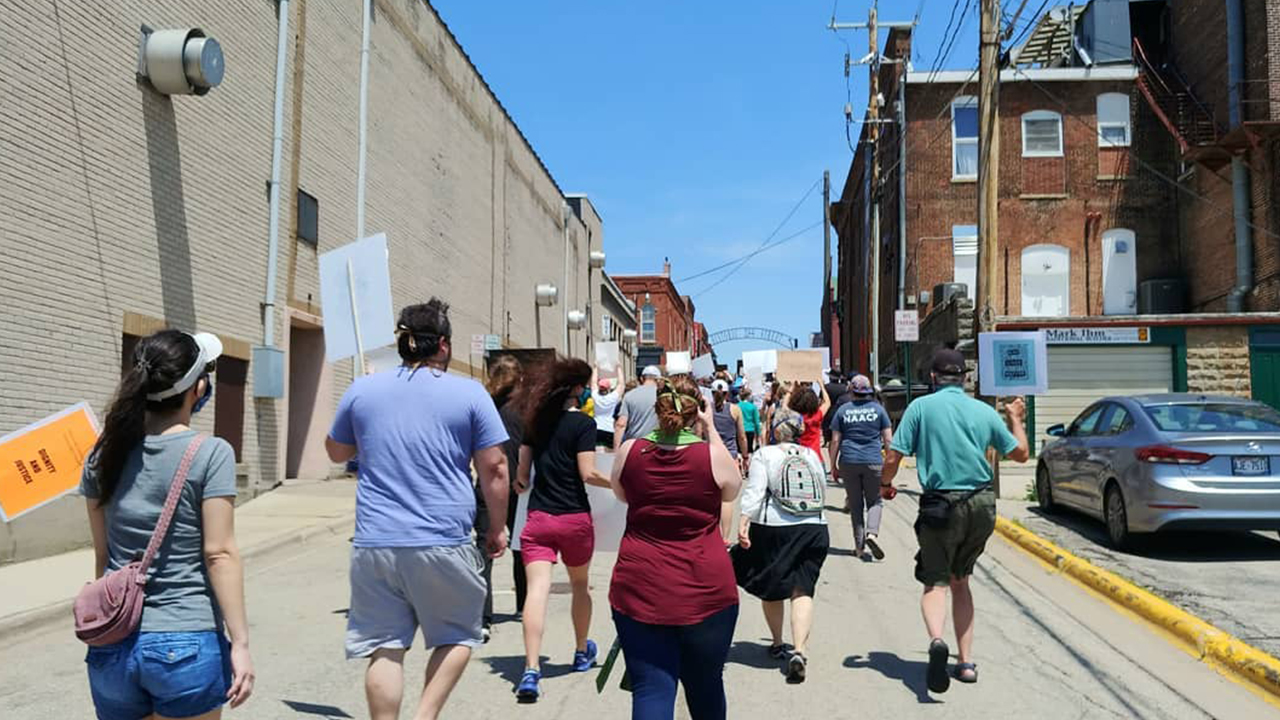 Black Lives Matter is the message two University of Wisconsin-Platteville activists are spreading in Southwest Wisconsin in response to the deaths of George Floyd, Breonna Taylor and Ahmaud Arbery. On June 7, Alvin Watts and Alexandria Lara organized a peaceful protest at City Park in Platteville to bring awareness to systemic racism and police brutality. Hundreds of demonstrators gathered to listen to the speakers and march through downtown shedding a light on the racial justice movement taking place across the globe.

“Black people and people of color have been getting discriminated against on so many levels. My grandmother, grandfather and my great-great-grandmother all have gone through it,” said Watts, a sophomore business administration major from Milwaukee, Wisconsin. “I’m really happy I was able to do something and put something on. This is not the end. There are going to be more coming up.”

When Watts first told Lara about his plan to organize a protest, they started sharing his idea with friends and created a Facebook event. Shortly after they started receiving hundreds of RSVPs and positive responses.

“Alvin brought up the idea of what we could do,” said Lara, a senior psychology major from Trenary, Michigan. “It takes one person to make it happen and then people will show up. We wanted to show our support. I wanted to show my support for him too.”

Watts was the first speaker to share his story at the event. He explained how racism impacts his life.

“At first, I was really nervous, but then I started to get going. It wasn’t as scripted as I thought it was going to be. It was all from my heart and how I really felt,” he said. “I don’t want to worry about my future kids going through racial discrimination, getting worried about getting shot or about police or anyone thinking they have the right to do so. When I was speaking on those terms, I already knew I was being real in the moment and being raw and authentic.”

Lara said the speakers emphasized why this transformative movement is crucial to people of color and why real change needs to happen. “I know especially with me being in the white community we don’t get those experiences. You don’t know how to engage in that conversation with somebody,” she said. “It was great that Alvin and everybody else were able to share their experiences of not only being Black in America, but being Black in Platteville and being Black on campus.”

Both Watts and Lara acknowledge the support and encouragement they have received from the UW-Platteville Office of Multicultural Student Affairs to use their voices.

“I know especially coming from a small town we really don’t see a lot of diversity,” said Lara. “You can take the initiative and step in and educate yourself. People change their minds every day. It’s important to be open minded and educate yourself on the issues, even if they don’t impact you personally.”

Watts notes there is still a long way to go. “People need to pay attention. Be conscious about the decisions you make,” he said. “Our generation is going to push forward. Young people are always going to push for it, wanting change promoting change, and trying to get equity and equality for everybody.”