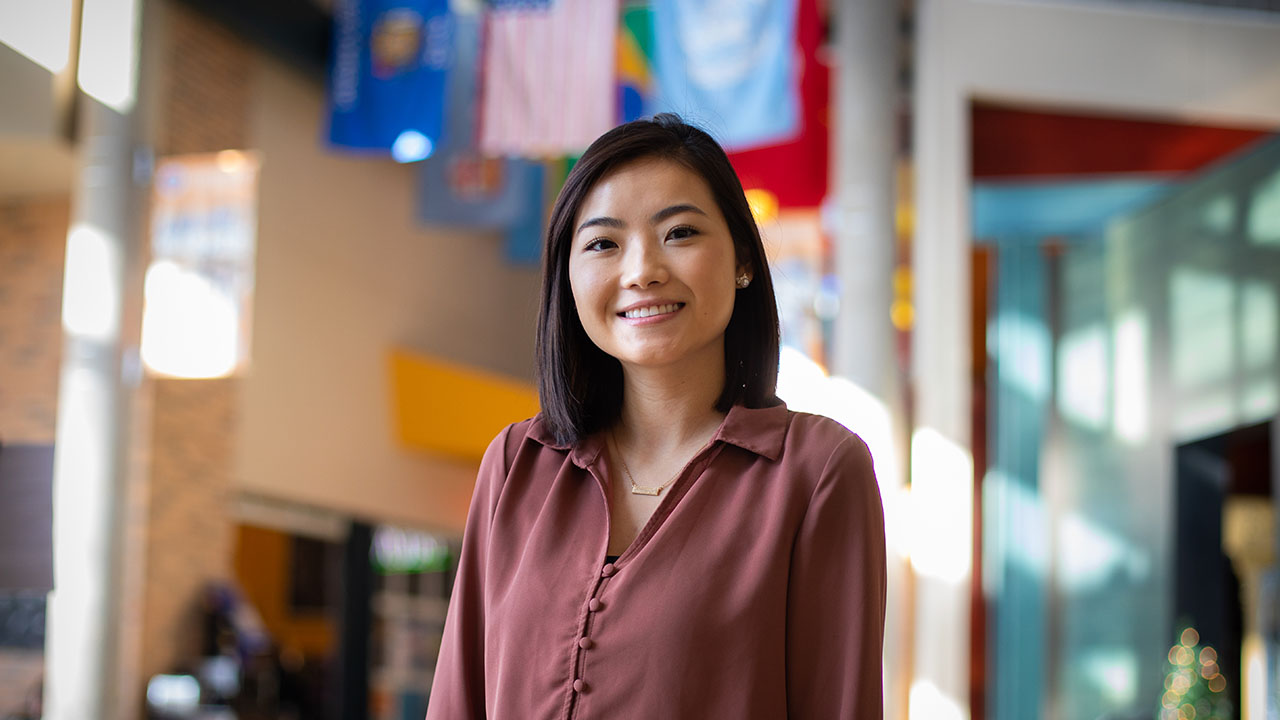 It’s a day University of Wisconsin-Platteville senior Pachia Vang will never forget: Oct. 24, 2019 in the U.S. Citizenship and Immigration Services Field Office in Minneapolis, Minnesota, raising her right hand and taking the oath of becoming an American citizen.

“It’s means a lot to me,” said Vang, a UW-Platteville business administration major from Portage, Wisconsin. “I consider it one of my successes I have done in my life.”

It was a journey with hurdles, but Vang never gave up. In 2005, Vang, her mother and half-brother left their refugee camp in Thailand. “I was 7 or 8 when we came to Minneapolis. I can’t remember much of the flights or anything, but I felt like it was pretty long,” she said. “We did a lot of walking around the airport; it was dark and I was tired.”

Vang lived with family in Minnesota, Texas and moved to Wisconsin when she entered middle school. After turning 18 she decided to apply for her U.S. citizenship.

“It was a really long process. The application was 20 pages long. I wasn’t sure how to do all of it on my own. My sister took me to her friend who went step by step in helping me fill out the application – it was really overwhelming,” Vang said. “I didn’t turn the application in. I waited for a year after that.”

Vang decided to re-start the application process this past summer after talking to her friend at UW-Platteville who recently became a U.S. citizen. “I sat down and did the application. I made a photo copy of my I-94, green card, driver license and all the identification IDs I have and sent it all in,” she said.

It usually takes about six months to complete the entire citizenship process, but Vang heard back in a matter of weeks. “After a month of submitting my application they [U.S. Citizenship and Immigration Services] sent me an appointment to do my biometrics in Milwaukee (Wisconsin). A month later they emailed me to make an appointment for my citizenship test.”

Vang traveled to Minneapolis to complete the next part of the process. “After my [citizenship] interview I was told my application was accepted and my ceremony was later that day; it happened really fast,” she said. “Initially it was scary for me because I didn’t have anyone going with me. I was going by myself, while other people had their families.”

Following Vang’s U.S. naturalization ceremony she felt a sense of reassurance. “I have heard a lot stuff about people getting deported. I know that’s not a situation my family is afraid of, but it’s still a relief to get it out of the way,” she said. “I’m okay now; I’m safe now.”

As an American citizen Vang said she’s ready to travel the world. “Ever since I’ve left Thailand, I’ve never been back,” she said. “I haven’t seen what it looks like in a really long time. I would definitely go there first; go look at my hometown. See all the places we used to live in.”

Vang’s path to citizenship was a journey and now she’s encouraging others to submit their application. She’s in the process of helping her sibling. “My older brother is working on his citizenship. He’s asking me for advice. It’s nice. I’m the youngest one,” she said. “The whole process is a little scary and overwhelming, but don’t slack on it. I look back and it wasn’t that scary – I can only speak for myself, but I hope their process goes as quick as mine.”