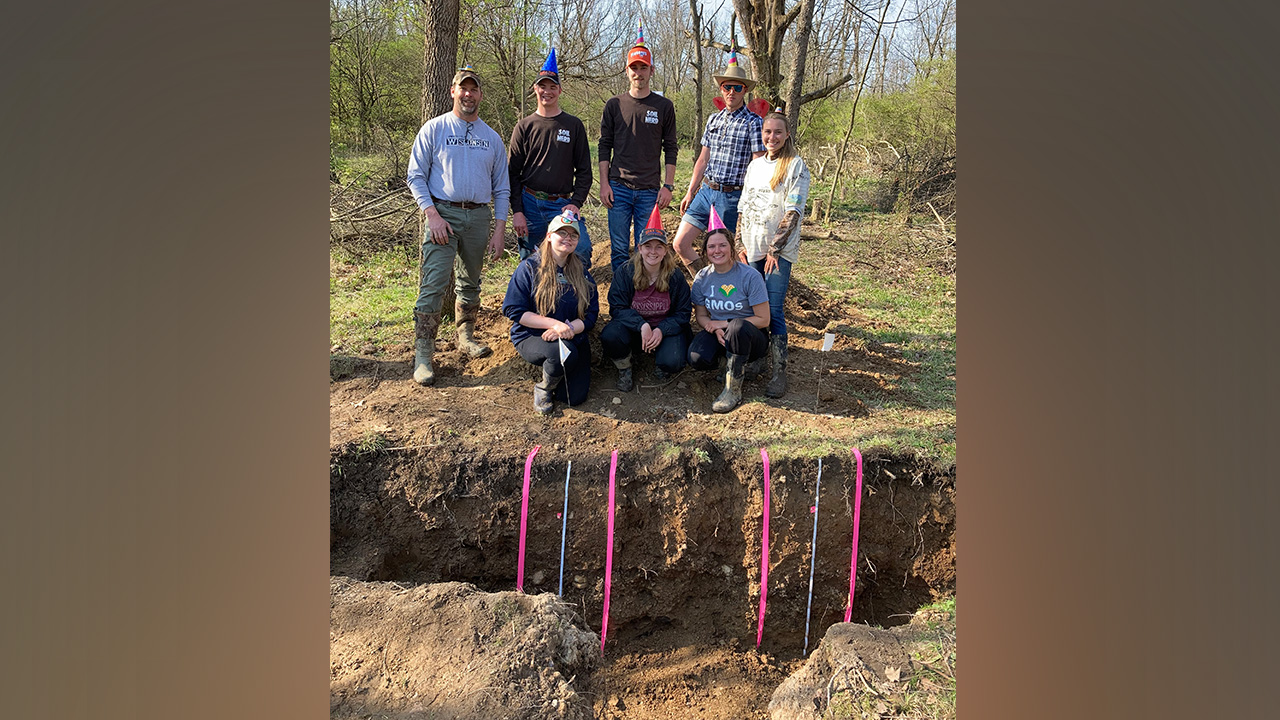 The University of Wisconsin-Platteville Collegiate Soils Team competed in the 60th Soil Science Society of America National Collegiate Soils Contest April 18-23. The event was held in Union, Logan and Champaign counties in Ohio and was hosted by The Ohio State University.

Participating in the event were students from 21 universities, representing seven different regions of the United States. Representing Region 3, which includes universities in Wisconsin, Illinois, Michigan, Indiana and Ohio, were UW-Platteville, Purdue University and UW-Stevens Point. The team qualified for nationals by placing among the top three teams in the regional competition held in fall 2021.

The week-long event involves intensive field study of soils and landscapes and culminates in both individual and group competitions, which test the contestants’ abilities to accurately describe soil and landscape features and classify the soil using a scientific system called soil taxonomy. The contestants then use their descriptions to evaluate properties and limitations of the soil including water and carbon storage, suitability for building sites, roads, and septic systems, and hydric soil indicators for wetland determinations. Scoring is based on the agreement between the contestant’s descriptions and those of a professional soil scientists serving as the contest officials. Dr. Brian Slater, professor of soil science at The Ohio State University, served as the primary official and contest organizer.

Among the 84 participants in the individual contest, both Nollen and Field placed in the top ten, taking third and seventh place, respectively. In the group judging portion, UW-Platteville placed 10th out of the 21 teams participating. In the overall competition, which combines scores from both the individual and group contests, the team placed third behind only Virginia Tech and North Carolina State University. By placing among the top four individuals, Nollen was chosen to be part of a four-member team representing the United States at the International Soils Competition, which will be held in June 2022 in Scotland. The international competition is held every four years in conjunction with the World Congress of Soil Science. Nollen joins UW-Platteville alumni Kyle Weber (2014, South Korea) and Daniel Brumm (2018, Brazil) in representing Team USA in international soils competitions.

A large portion of funding for team travel and equipment was provided by donations to the UW-Platteville Foundation - Soils and Crops Teams Endowment Fund. Additional support was provided by the Segregated University Fees Allocation Commission.

For further information on the contest, or interest in joining the Soils Team or helping to sponsor the team through donations, contact Chris Baxter (baxterch@uwplatt.edu). Additional pictures from the contest can be found at www.facebook.com/UWPsoils.