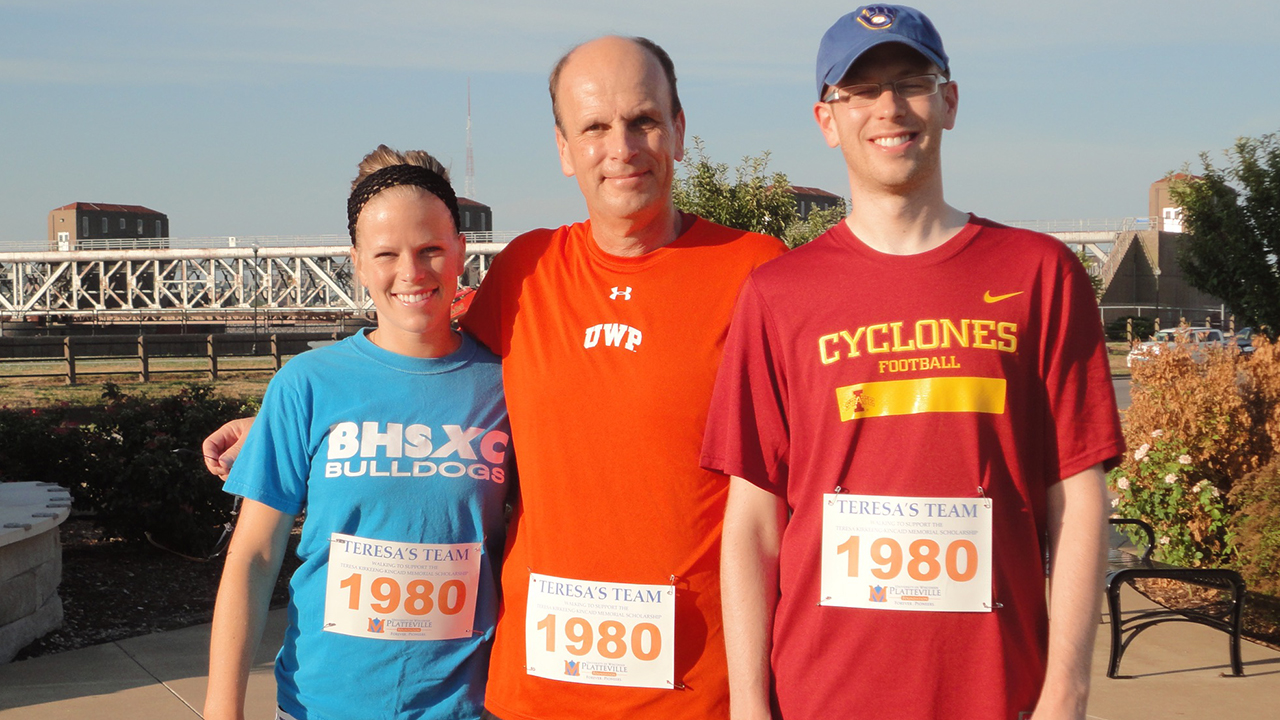 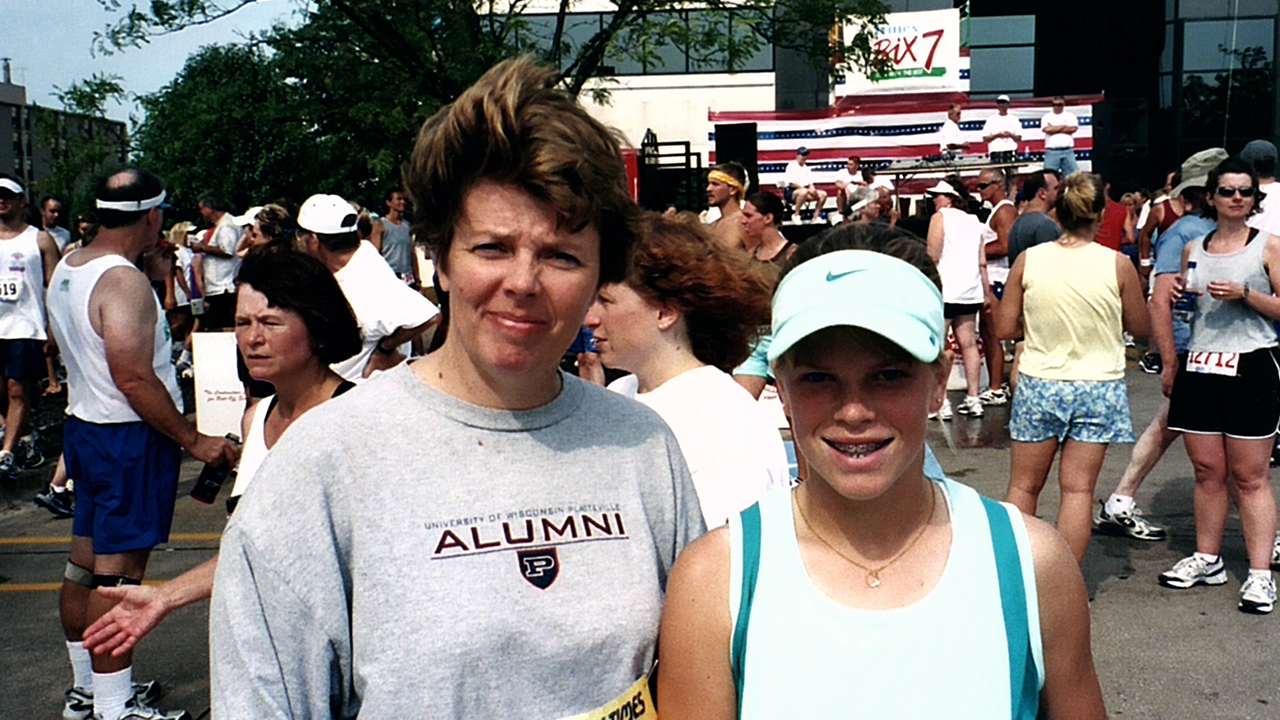 Remembered as an “individual more concerned with making a difference than making a fortune,” Teresa Kirkeeng-Kincaid ‘80 was a leader in the engineering field, respected as much for her care and compassion as for her expertise and drive. It is this legacy that her family hopes to see carry on through others with the Teresa Kirkeeng-Kincaid Memorial Scholarship for Women in Civil and Environmental Engineering.

Teresa earned her bachelor’s degree in civil engineering from UW-Platteville and her master’s degree in water resource management from UW-Madison. She joined the U.S. Army Corps of Engineers as a civil engineer with the Rock Island District in 1981, where she worked for 26 years in roles that included the assistant chief of the Planning, Program and Project Management Division. Teresa passed away in 2007.

Teresa and her husband, John Kincaid ‘80, met as students at UW-Platteville.

“One of the things that attracted me to her was that she had a strong faith, a big heart and a social consciousness that I didn’t see in everybody else,” said John. “When we graduated, and moved down here, I think others were attracted to that in her too. She was able to work hard and she was a good engineer, but she always took the time to mentor other people and she had a lot of people in the organization loyal to her because of that. She built her reputation in the Army Corps of Engineers, not just in the district, but around the nation, as one of the people who would give you her best.”

“At the time she entered the workforce, as a female engineer she was like her own little bulldozer, paving her own path,” said Teresa’s daughter, Ann Drapcho. “It was very cool to see that, and I think as females at any workplace, sometimes we have to do that. I wish I could talk to her more about that now, but I was able to glean a little bit about that as a high schooler or middle schooler, and from hearing others’ stories about her after she passed.”

Ann remembers her mother’s professional approach as a blend of confidence and kindness – an example she follows in her career now as shopper marketing manager at Cameron’s Coffee in Minneapolis, Minnesota.

“My mom assumed the good in everybody, and I’ve been able to carry that into my life,” said Ann. “I feel like when you approach life from that perspective, everything else falls in place. Us females go into situations and sometimes don’t have as much confidence as everyone else in the room. Whether it was outward or inward, my mom had confidence and said to herself, ‘I know I’m good enough to do this.’ Besides being confident, she was also just kind. She would enter a room and acknowledge everybody there.”

The Kincaid family’s decision to create a scholarship to support women engineers was a way to continue the legacy that Teresa had begun herself.

“Teresa was speaking at a STEM event in the fall of 2006 at one of the inner-city schools in Davenport, to encourage high school girls to go into STEM,” recalled John. “There was a girl there named Rebecca Briesmoore who heard her talk and felt her passion for women in STEM, and changed her mind about her career. She went to Iowa State University, earned her engineering degree, and came to work at the Rock Island District Corps of Engineers. When she graduated high school, she received a prestigious scholarship, and I was fortunate to watch her accept that scholarship and she talked about how impactful Teresa’s story was on her life.”

This confirmed for John, his son Jacob, and Ann that they wanted to share Teresa’s story to make an impact on more students. In 2009, they created the Teresa Kirkeeng-Kincaid Memorial Scholarship for Women in Civil and Environmental Engineering. Since its inception, more than $80,000 has been raised for the fund, and 11 students have received the scholarship.

The Kincaids turned to a family tradition to help raise money for the scholarship — the annual Bix 7 road race in Davenport, Iowa.

“As a running family, both my mom and dad would always run the Bix,” said Ann. “It was the quintessential Quad City summer event.”

They created “Teresa’s Team” to give family and friends an opportunity to participate in the event while raising money for the memorial scholarship fund. This year, the official Bix 7 race was held virtually, so the Kincaid family mailed commemorative bibs to all the participants who made a donation to the fund and pledged to run or walk on their own.

“Because that was something that always brought our friends and family together, it was an easy way to keep her legacy going,” said Ann. “There’s always something special about doing an activity that helps remember somebody. It’s really fun to see all the pictures of people around the country walking or running and remembering my mom.”

Jacob agreed that seeing so many people participate in the event for so many years is inspiring.

“The number of participants this year really shows that mom positively impacted many people throughout her life,” said Jacob. “It’s been 13 years since she passed away, and people are still continuing to celebrate her life by running the Bix and supporting the scholarship. I’m sure the participants are also motivated to support such a good cause – the next generation of women engineers. Mom was a role model who inspired me to pursue engineering as a degree and as a career. It’s very special for me to know that the Teresa Kirkeeng-Kincaid Memorial scholarship will not only support the next generation of women engineers, but also the next generation of role models who can inspire others just as mom did for me.”

Despite this year’s untraditional event, nearly $4,230 was raised by more than 35 donors. This continued support of the fund will help ensure that students for years to come will have the opportunity to receive the scholarship. And, as the Teresa Kirkeeng-Kincaid Scholarship fund continues to grow and more recipients join the workforce, John and Ann say they are proud to know Teresa’s legacy has a part in their success.

“It feels satisfying helping people who have a common vision for humanity succeed in their professions,” said John. “I just feel good about their prospects in the world and I’m glad they are going to be out there.”

“Because they were exposed to my mom’s story and that’s part of their story now, she’s living on in what they are doing,” added Ann. “And that gives me peace knowing they live on in her legacy.”

To donate to the Teresa Kirkeeng-Kincaid Scholarship fund, visit www.uwplatt.edu/give.