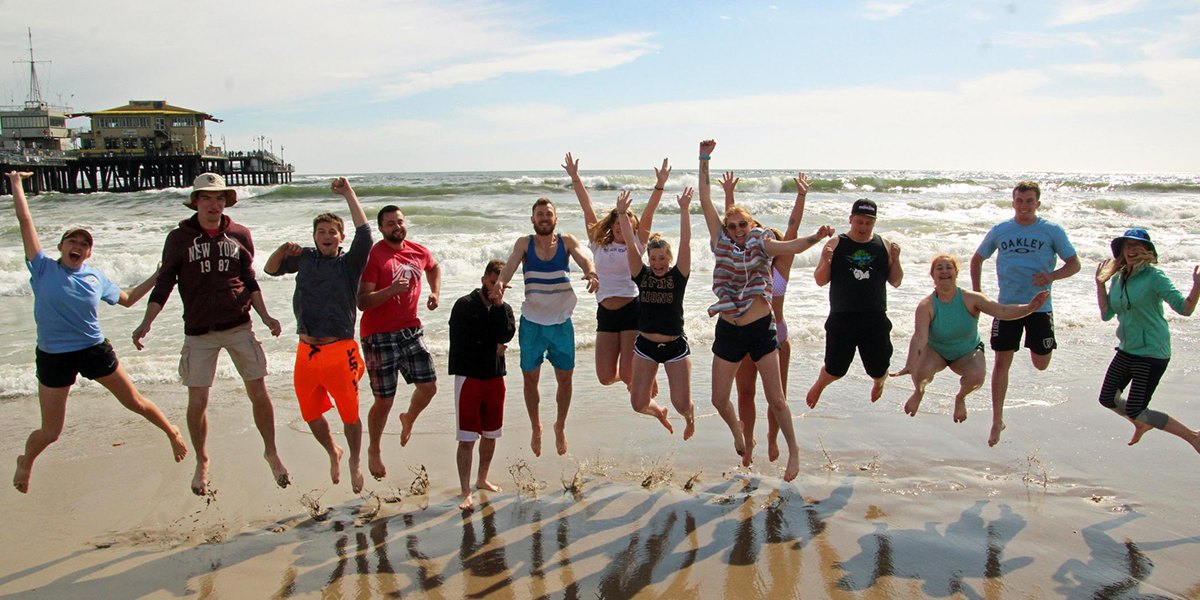 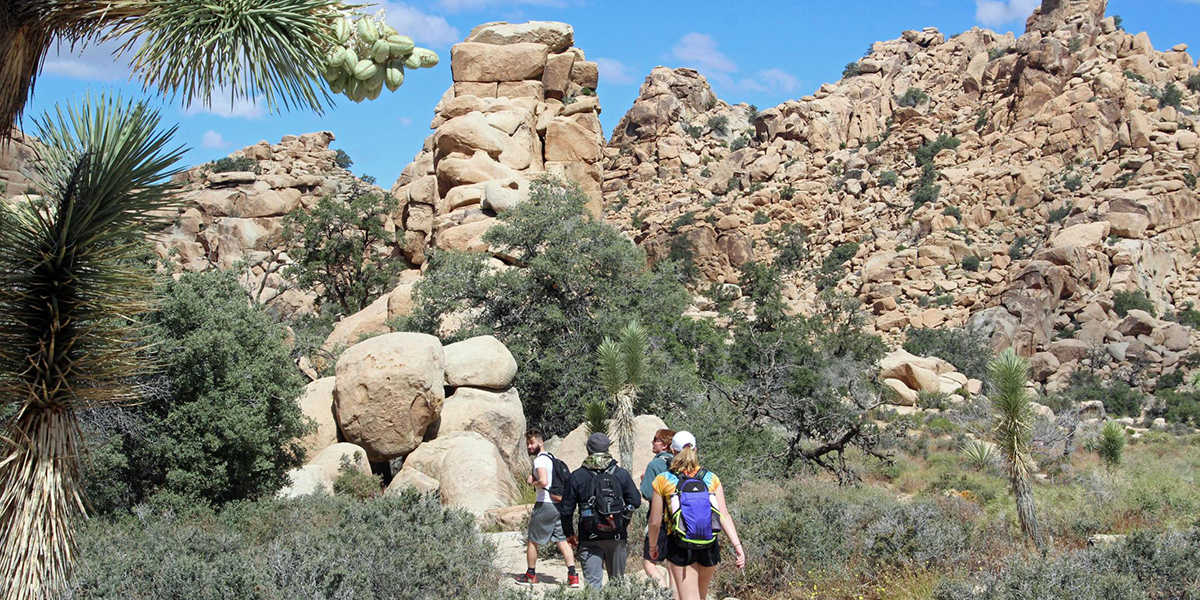 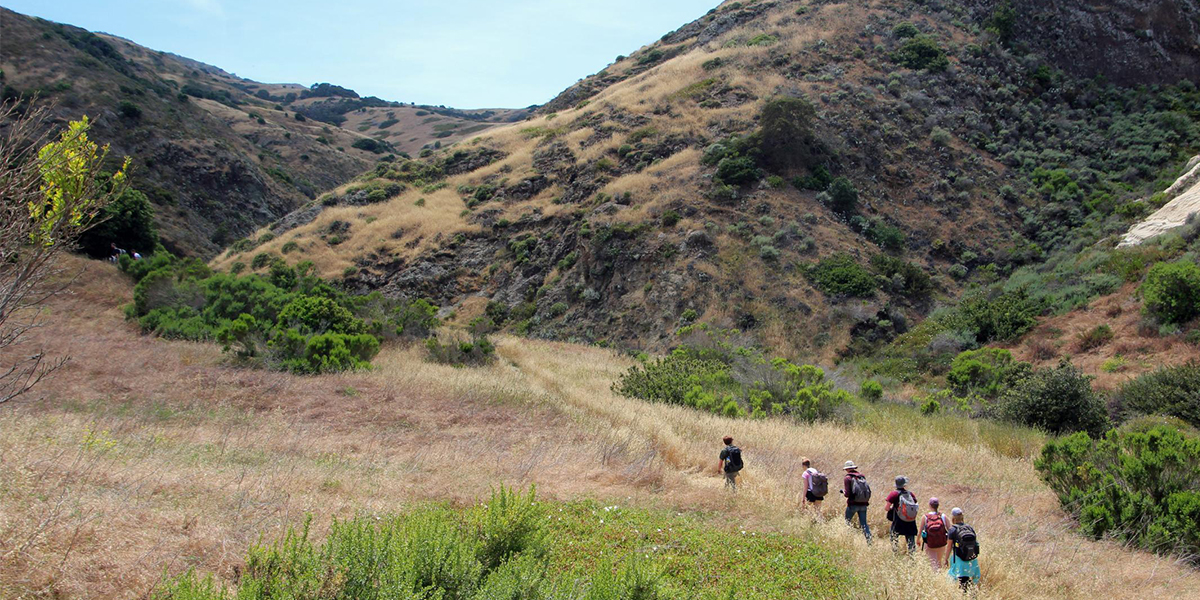 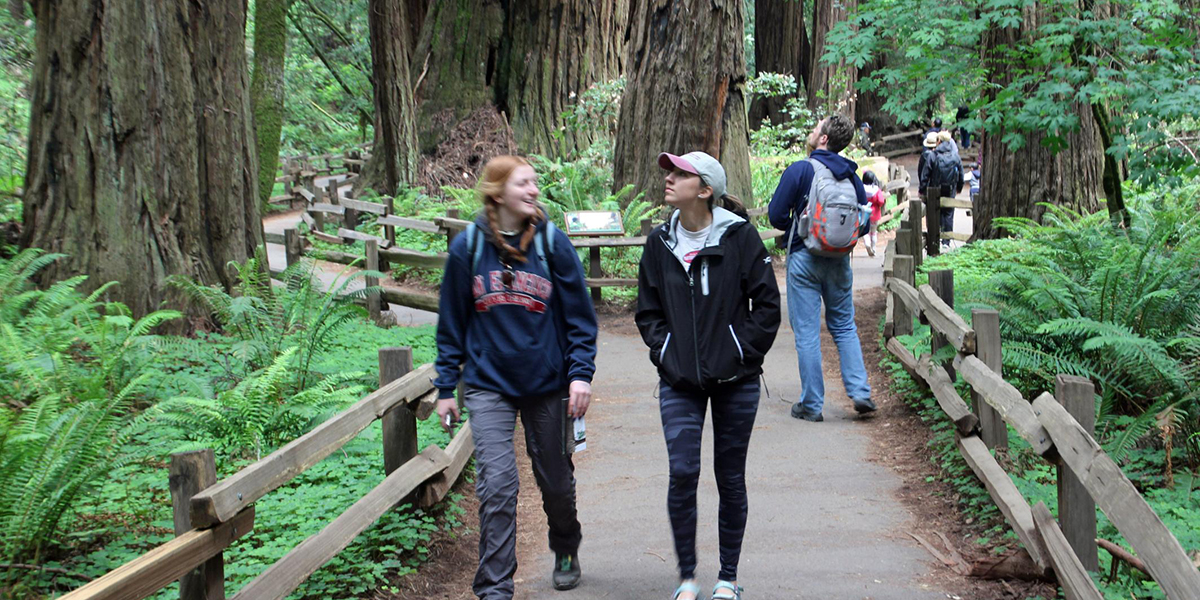 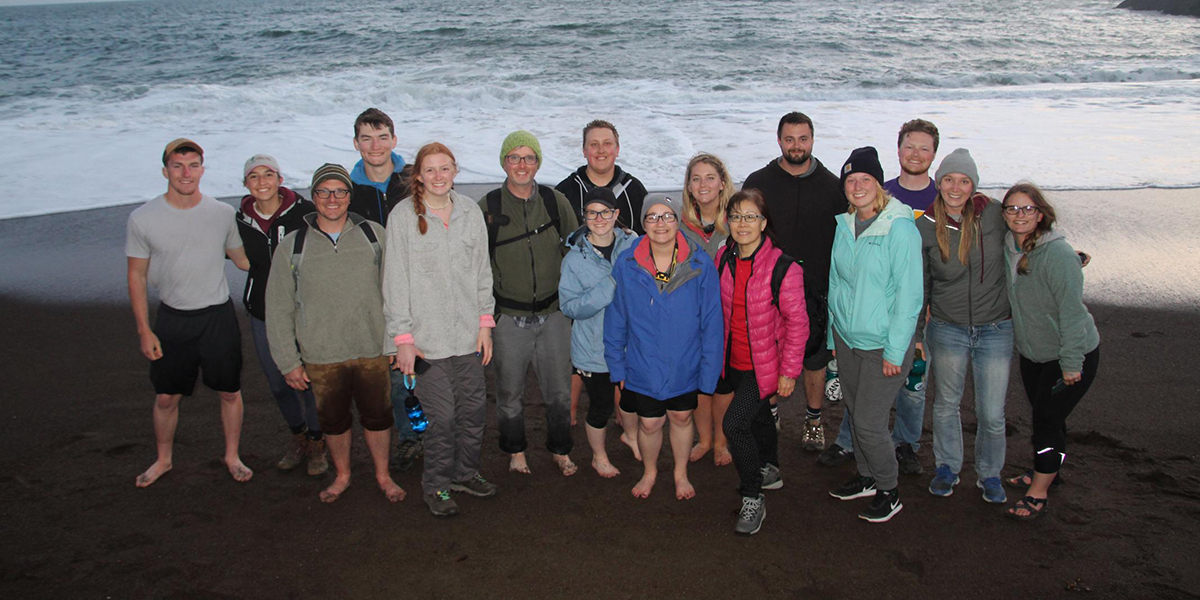 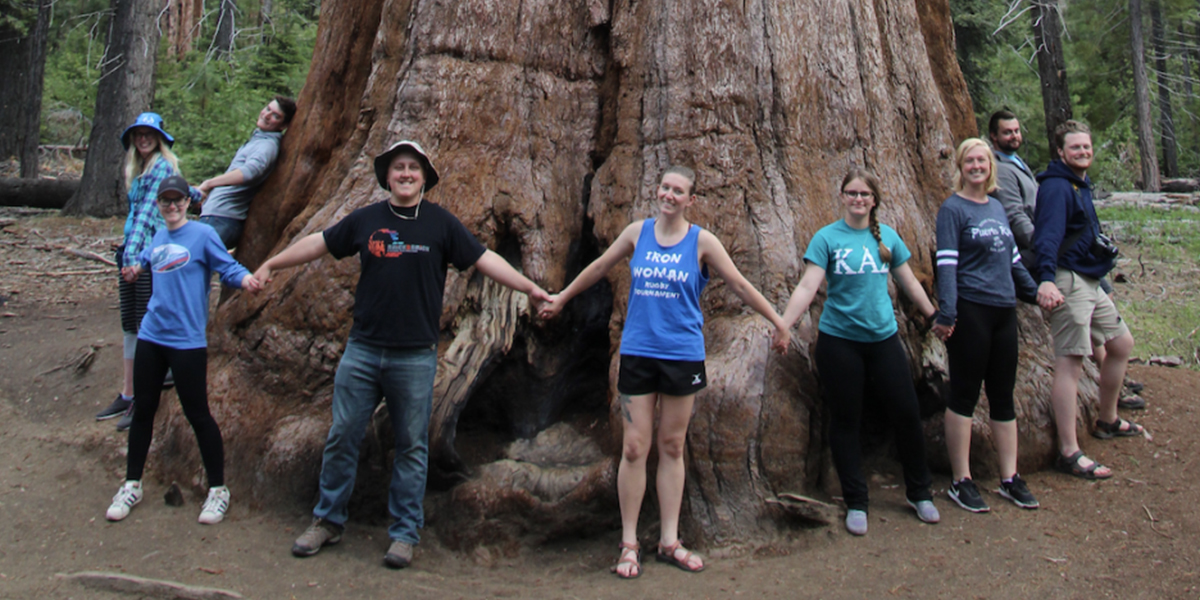 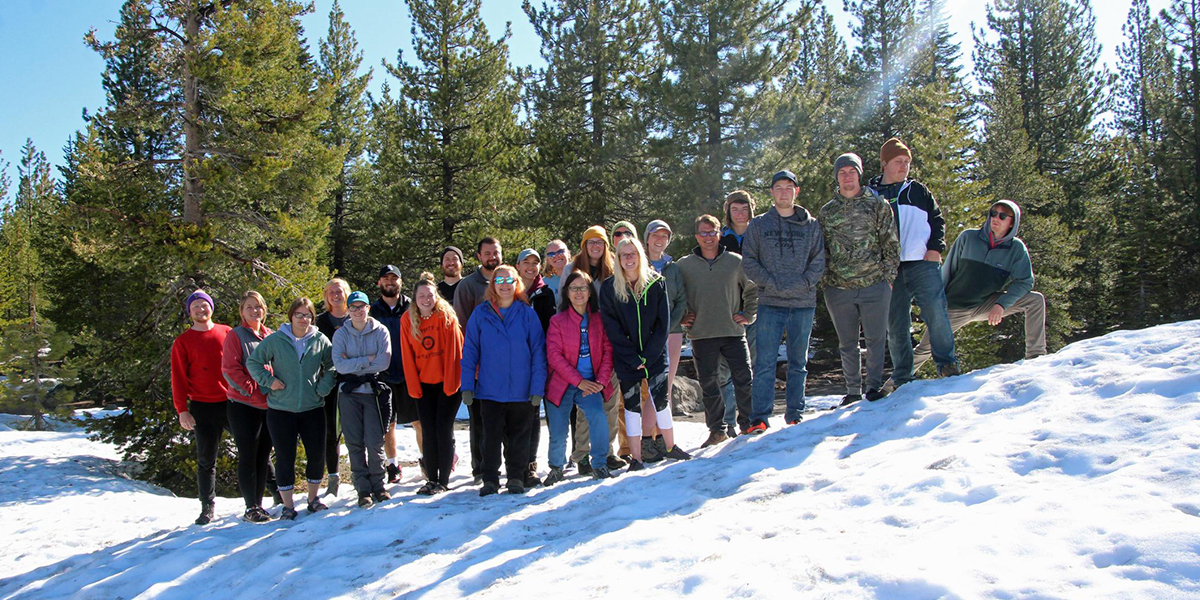 “This field experience was the most influential, memorable class that I have ever taken. Being able to see and experience nature and its history in such a hands-on way was a completely new learning experience for me. A trip like this is the best educational adventure that a school could possibly offer students.”

These are the words of Taran Newton, a sophomore sustainability major at the University of Wisconsin-Platteville from Boscobel, Wisconsin, who recently travelled west with 17 other students and several faculty and staff members on a three-week geography field experience in the western United States.

The annual excursion, designed to help students learn about the physical, cultural and environmental geography of the western United States, is part of the university’s Field Geography of the Western United States course, also known as the “Western Trip.” UW-Platteville faculty and staff who led the trip included Dr. Richard Waugh, professor of geography, Dr. Chris Underwood, associate professor of geography, Dr. Dong Isbister, associate professor of Women’s and Gender Studies, and Dr. Ben Grady, instructor of biology and botany.

Also essential to the trip were two former UW-Platteville students, Brooke Kruppe and Katelyn Grgich, who served as staff in charge of the logistics of the trip. Both women had been participants in three previous Western Trips as students.

From May 18-June 7, the group travelled more than 3,000 miles – camping out each night under the stars – to explore and examine Native American culture, the impact of climate change, biogeography, landforms, hydrology and water use, physical regions and national parks in California and southern Nevada.

Students learned about the Chumash, Ahwahnechee, Yahi and Timbisha Shoshone Native American cultures; explored the beauty and ecosystems of Joshua Tree, Channel Islands, Lassen Volcanic, Yosemite and Death Valley National Parks; studied the tectonic and erosional landforms in the California Coastal Ranges, southern Cascade Range Sierra Nevada and Great Basin Ranges; witnessed the devastating impact of climate change and fire in the region; learned about the environmental impact of humans on the physical and cultural landscape; and much more.

A special moment occurred early one morning in a remote area of Marin County, California, when two students discovered a hiking trail that led to a beautiful and remote beach on the Pacific Ocean, surrounded by sea cliffs hundreds of feet high. They were so impacted by the beauty and majesty of this beach that many of the other students and faculty hiked the trail to see it that evening.

Providing community service was an important component of the trip. Students and faculty spent one day building, from scratch, approximately 600 yards of a trail just outside Yosemite National Park in California on United States Forest Service land, working in conjunction with a nonprofit environmental group called the Tuolumne River Trust. The project, which involved hard manual labor necessary to open up the trail and provide the appropriate gradients, gave students a chance to help make decisions regarding the routing and hydrologic and biogeographic parameters necessary for the successful completion and use of the trail. The Tuolumne River Trust is interested in constructing trails on this land to provide a low-impact use for the land, with the hopes that it will help preserve the forest and decrease deforestation.

The Western Trip made a deep impact on the students as well as the professors. For many, it was a life-changing experience.

“My favorite part of this trip was being in the wilderness,” said Ian Kenworthy, a social science history secondary education major from Kewaskum, Wisconsin. “Prior to this trip, I had never slept outside or truly experienced the feeling of being away from civilization. This experience made me appreciate many parts of the world, but especially water. Seeing California’s lack of water showed how fragile the natural world can be and how we humans can wreck it. Before this class, I would have never considered myself a nature person, but since then, I have been trying to appreciate as much of nature’s glory as I can."

“This trip helped me see national parks across the Western United States and understand the purpose and goals of the park system,” said Ariel Jacobson, a senior forensic investigation and biology major from Jefferson, Wisconsin. “This class encourages learning how to make a difference in treasuring and protecting the parks and bringing awareness to the importance of the park system and why it was established. It truly was a once-in-a-lifetime opportunity to go on this trip.”

Waugh agreed, saying, “This was a remarkable trip. One of the most memorable moments of the trip for me was seeing a pod of about 2,000 dolphins in the Santa Barbara Channel in California as we returned from our visit to the Channel Islands. I also was struck by the devastation caused by the 2018 fires in Yosemite National Park and the town of Paradise, which was burned nearly to the ground in the Camp Fire last October. The extent of the devastation helped make both climate change and the impact it is having on people real.”

One of the most impressive moments of the trip was when the group walked up a winding switchback trail to see and touch ancient bristlecone pine trees in the Ancient Bristlecone Pine Forest, a protected area in the White Mountains of eastern California.

“Some of the trees in Ancient Bristlecone Pine Forest are more than 5,000 years old,” noted Underwood. “To be in the presence of some of the oldest living organisms on our planet was awesome and humbling. I felt an overwhelming feeling of reverence, almost as if I was in a cathedral. This location is central to the study of dendrochronology (using tree rings to reconstruct past climates and environmental conditions).”

“Seeing and touching the ancient trees gave everyone an appreciation for the age of the Earth,” added Waugh. “We felt and understood our place as human beings.”

As Underwood helped guide the students on their explorations, he was often filled with nostalgia, for 20 years prior, almost to the exact week, he had taken a trip as a college student at Texas Christian University in many of the same locations covered in the 2019 UW-Platteville trip. A special memory from his college trip was exploring the geography of California while reading “Cannery Row,” a novel by John Steinbeck that explores the struggles, feelings and lives of those who lived in the relatively disadvantaged neighborhood associated with the cannery district of Monterey, California.

Fittingly, a special memory Underwood had from the more recent trip was revisiting the existing street in Monterey called Cannery Row and sharing his love of the place, and Steinbeck’s representation of it, with students, some of whom had bought the book while on the trip.

“I will never forget the impact that class had on me as a student,” said Underwood. “It was the best class I ever took, and is now one of my favorite classes to teach.”

The trip provided students with knowledge, skills and experience that helped prepare them for their future careers and life.

“The Western Trip has had a strong influence on the lives of many of the students who have gone in previous years,” said Waugh. “It is common for students to re-examine their career choices in light of their experience on the trip – either in providing a new geographical or topical focus for their existing majors, or opening their eyes to entirely new possibilities for careers.”

In addition to observing and recording their experiences in a journal, students had the option of writing essays in which they reviewed a book that dealt with some aspect of the American West, applying the material in the book to the region they studied. Students will be evaluated by a comprehensive essay final exam, which will be completed by the end of July.