Students to present disaster response applications at Research in the Rotunda 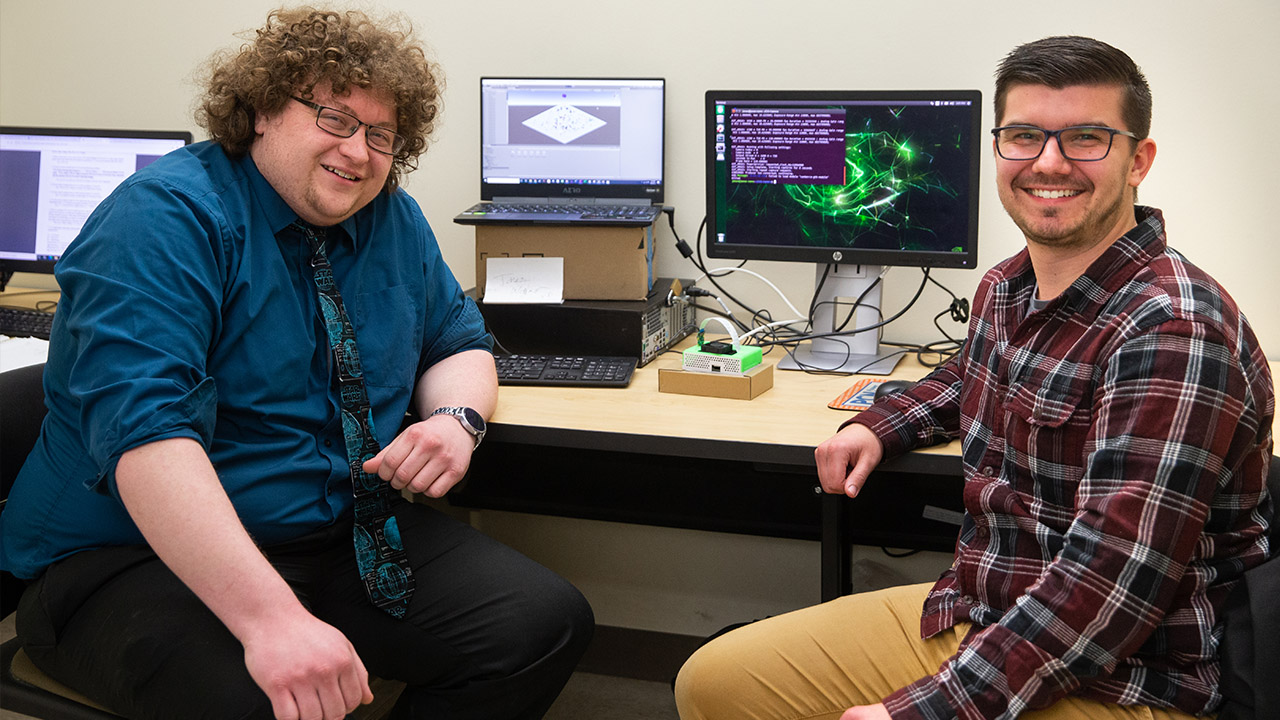 Pictured left to right are Jonas Wagner and Logan Shefchik.

Natural disasters are inevitable, but a group of University of Wisconsin-Platteville students are researching how an application can assist with disaster response. Jonas Wagner, Logan Shefchik and Keegan Smith are collaborating with Electrical and Computer Engineering Assistant Professor Dr. Mehdi Roopaei on their research topic, device analytics for disaster response applications. They will be showcasing their findings at the 17th annual Research in the Rotunda on March 11 in Madison, Wisconsin.

“We are taking drones or an unmanned aerial vehicle and deploying them into disaster response situations,” said Wagner, a senior double-majoring in engineering physics and electrical engineering from Oshkosh, Wisconsin. “Instead of processing images and different data at the cloud and having to wait for the latency, our research brings the computation down on to the drone itself. That way you can have faster response times.”

Wagner started the idea for the project in the fall of 2018. He received the university’s Undergraduate Research, Scholarly and Creative Activity scholarship, which allowed him to start the research process in spring of 2019. He continued his research throughout the summer and published a paper with Roopaei in January.

“I am looking at the image processing itself, using a virtual environment to simulate these dangerous situations and be able to detect objects within that environment from an aerial vehicle,” Wagner said. “The two other members are working on the hardware called a jetson nano.”

The goal according to Wagner is to reduce the number of disaster responders who have to survey the environment or enter dangerous situations. He said the group has thought about how the device could be used to review flooding in Wisconsin.

“Last year, Southwest Wisconsin, and specifically towns like Lancaster (Wisconsin), were doused in water. It’s very difficult to survey the environment without deploying tons of disaster responders; using drones would make it a lot easier,” he said.

Wagner is looking forward to sharing information with state lawmakers and discussing the benefits of undergraduate research. He said it’s important for those attending Research in the Rotunda to see the value of the disaster response application along with the other projects being presented across the UW System.

“It’s important to fund these sorts of projects. It’s uncommon for undergraduate funding in research areas,” he said. “The fact that UW-Platteville has these opportunities is really useful.”

As Wagner prepares to present in Madison next month, he said it’s only the beginning of the research. “Dr. Roopaei has helped me grow my idea,” he said. “I’m planning on going to graduate school and expanding my research.”