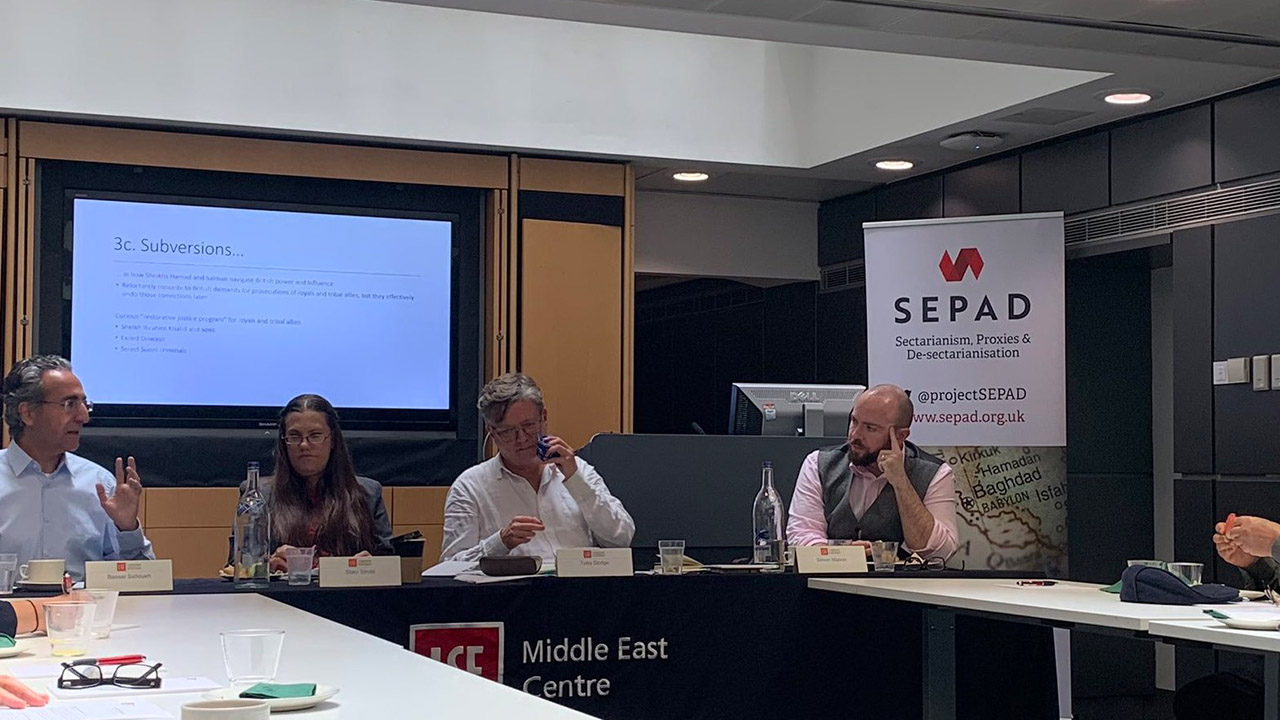 Dr. Staci Strobl, second from the left, participates on a panel on the topic of the structure of sectarianism in the Middle East which took place on Sept. 11, 2019, at the London School of Economics, Middle East Studies Center.  Other speakers were Dr. Bassel Salloukh of Lebanese American University (far left), Dr. Toby Dodge of the London School of Economics (second from the right) and Dr. Simon Mabon of the University of Lancaster (far right). 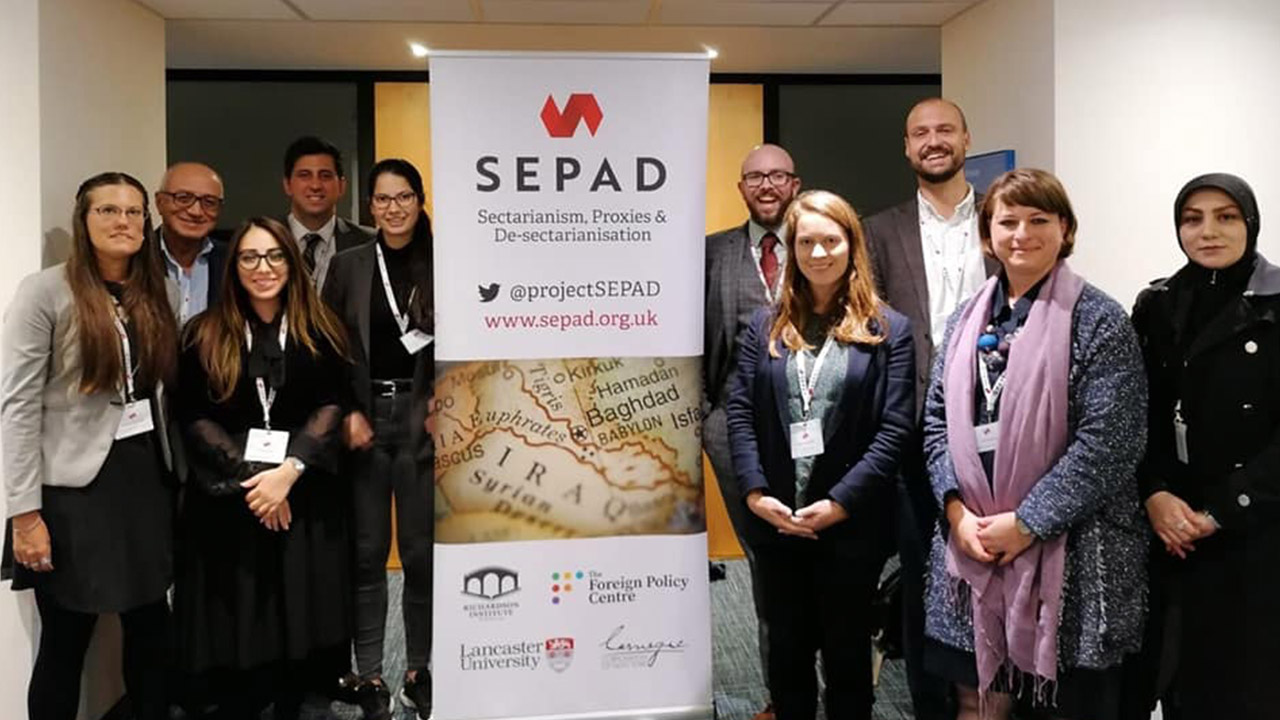 Dr. Staci Strobl, associate professor of criminal justice at the University of Wisconsin-Platteville, has been asked to join an international team of scholars convened by the Sectarianism, Proxies and De-sectarianization project, based at the Richardson Institute of Peace and Conflict Studies at the University of Lancaster in Lancashire, England. The project is funded, in part, by the Carnegie Corporation.

The purpose of the SEPAD team is to develop scholarship on problems related to sectarianism (religious discrimination) in the Middle East, to envision de-sectarianization and to share the work with political representatives and policymakers in the region and around the world.

On Sept. 10, as part of the team, Strobl flew to London, England, to share her research on the historical problems of sectarianism in Bahrain with members of Parliament in the United Kingdom, including Member of Parliament Stephen Twigg, Labour Party; Member of Parliament Baroness Sayeeda Warsi, Conservative Party; and former Member of Parliament Stephen O’Brien, Conservative Party. The opportunity stemmed from Strobl’s recently-published book, “Sectarian Order in Bahrain: The Social and Colonial Origins of Criminal Justice” (Lexington Books, 2018), which is the culmination of her research into the colonial criminal case files preserved in the British Library’s India Office Records.

“I was delighted to share the fruits of my scholarship with members of Parliament who make decisions on foreign relations,” said Strobl. “As the former colonial power in Bahrain, the UK continues to have strong ties to the country as a major ally. I believe that the UK can take a more proactive stand to pressure the Bahraini government to honor human rights and due process in its criminal justice operations, particularly those of people from marginalized Shi’a populations. Withholding security assistance until meaningful criminal justice reform takes place is fundamentally needed.”

“Staci’s contribution was hugely important to the workshop and to the project more broadly,” said Dr. Simon Mabon, senior lecturer of international relations and director of the Richardson Institute of Peace and Conflict Studies. “Her incredibly thorough archival work has added an important historical dimension to the work that SEPAD is doing and her approach complements that of other scholars in the project while offering a unique and innovative take on several prominent questions that have been central to what we’re exploring. I am so very pleased that Staci is involved in our work; she has been a welcome and wonderful addition to our team and we all look forward to working with her in the coming years.”

“Staci’s scholarship clearly has an international impact,” said Dr. Melissa Gormley, dean of the College of Liberal Arts and Education at UW-Platteville. “It is an excellent example of the teacher/scholar model that makes her and her department stand out."

While in London, Strobl was also invited to a conference on the topic of sectarianism in the Middle East as part of her role as a SEPAD fellow – scholars who form the core team for the SEPAD Center, housed at the Richardson Institute for Peace and Conflict Studies. At the conference, Strobl and other fellows shared papers they are working on for an upcoming special issue of the peer review journal, “The Review of Faith and International Affairs.” Strobl’s paper, tentatively titled, “State Sponsorship of Sectarian Violence in 1920s Bahrain: A Dark Shadow Cast,” addresses state-sponsored murders of Shi’a Bahrainis in the 1920s.

In addition, on Sept. 11, Strobl also presented a paper, “Bahrain and the Structure of Sectarian Discrimination in the Criminal Justice System,” at the London School of Economics, Middle Eastern Studies Center, in London. The paper focused on the transition from customary (tribal) practices around justice to the contemporary criminal justice system based on colonial influences. She showed how Sunni oppression of Shi’a populations has been a consistent feature of justice in Bahrain despite the structural changes.

Going forward, as part of the SEPAD team, Strobl will receive funding from SEPAD to continue her line of research. She plans to involve undergraduate students along the way, to support undergraduate research at UW-Platteville.

This past March, Strobl presented “Women and What Works in Post-Conflict Policing: The Importance of Building Social Representation” at the 63rd session of the United Nations Commission on the Status of Women, held at the United Nations Headquarters in New York.