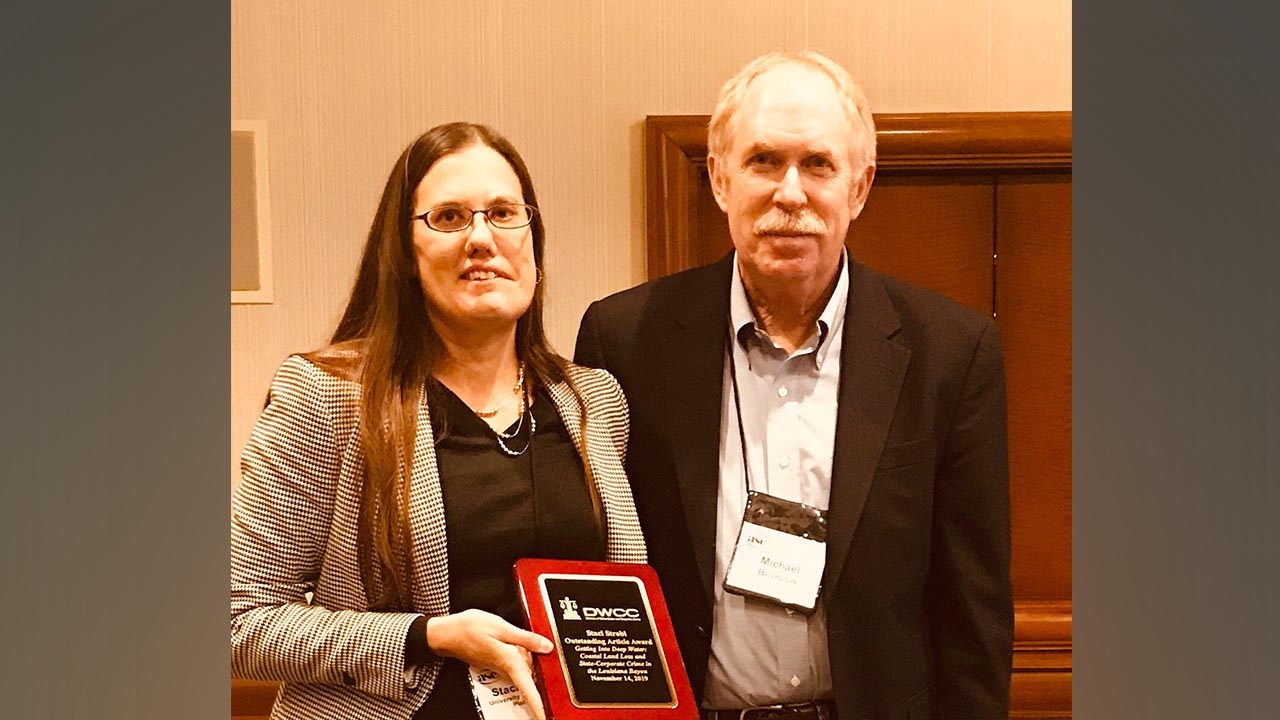 Dr. Staci Strobl and Dr. Michael Benson, University of Cincinnati professor and president of the ASC's Division of White Collar and Corporate Crime

The award recognized their paper, “Getting Into Deep Water: Coastal Land Loss and State-Corporate Crime in the Louisiana Bayou,” which was published in the July 2018 issue of the British Journal of Criminology. Strobl’s fieldwork for the research was supported by the UW-Platteville College of Liberal Arts and Education Dean’s Fund in 2016.

Each year, the ASC’s Division of White-Collar and Corporate Crime Awards Committee surveys all of the leading criminology, criminal justice and related social science journals to identify articles on white-collar and corporate crime and from that collection, chooses the award winner. Strobl and her co-authors’ paper was chosen from 69 papers submitted to ASC’s international competition.

In the article, Strobl and Dr. Lieselot Bisschop, assistant professor of criminology at Erasmus University School of Law in Rotterdam, Netherlands, and Dr. Julie Viollaz, wildlife crime research officer at the United Nations Office of Drugs and Crime in Vienna, Austria, address the problem of coastal land loss in Louisiana as an environmental crime.

Their analysis focused on areas in and around the bayous of Louisiana, where each day, approximately one football field of land succumbs to open water through a combination of rising sea levels, subsidence and erosion. Strobl said that although global climate change is contributing to the problem, the environmental degradation at the hands of the oil and gas industry also played a role.

Strobl explained that she and her colleagues wanted to understand whether there was any social or political support for the idea that the industry-related, environmental degradation in Louisiana amounted to a state-corporate crime.

“Theoretically speaking, a state-corporate crime occurs when government and industry officials cooperate in some way that creates a criminal or social harm,” said Strobl. “Based on interviews with local and national scientists and engineers, government officials and members of communities losing land, we unpacked various perceptions of the problem.”

Their findings suggest that because of economic reliance on the oil and gas industry, very few people intimately familiar with coastal land loss describe it in criminal terms. At the same time, Strobl and her colleagues argue that the case of coastal land loss in Louisiana fits the definition for a state-corporate crime, according to current theoretical definitions in criminology.

“I was very surprised but also delighted that our article received this prestigious award,” said Strobl. “The issue we unpacked was complicated and our interviews with the various stakeholders became crash courses in hydrogeology, storm-preparedness, levy-building, the state permit process and community-level trauma. It was a little outside-the-box as a criminology paper. But, I think the research was important because only the most marginalized people in Louisiana – those from Native American, African-American and mixed-race communities in the outer reaches of the bayous – were critiquing government and industry.  Although we confirmed that the environmental crime perspective is socially and politically rare in Louisiana, we also show that it has validity and should be taken seriously from a criminological point of view.”

“The committee valued the way in which Dr. Strobl and colleagues triangulated multiple sources of data and provided a nuanced theoretical analysis of the dynamics underpinning coastal land loss, as well as stakeholder perceptions of this loss,” said Dr. Carole Gibbs, associate professor in the School of Criminal Justice at Michigan State University, vice-chair of the Division, and chair of the committee that reviewed submissions.

According to its website, the American Society of Criminology is “an international organization whose members pursue scholarly, scientific and professional knowledge concerning the measurement, etiology, consequences, prevention, control and treatment of crime and delinquency.”