Starting out: the James and Joan (Brandt) Goldberg Scholarship gives students a boost 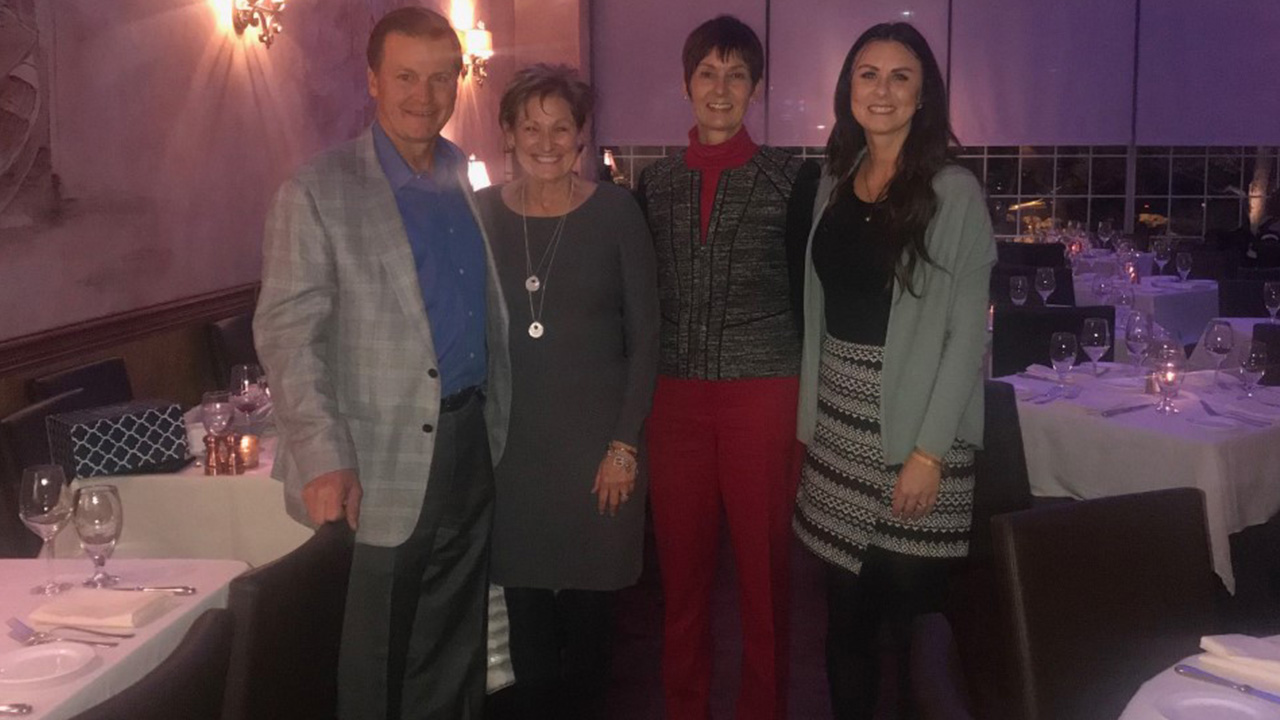 If you put Dayne Friday, Revalu Ronnfeldt, Hannah Frank and Tara Reber in a room together, you might be forgiven for assuming the four didn’t have much in common.

Friday, a football player for the UW-Platteville Pioneers, balances a schedule crowded with math classes and team workouts. Ronnfeldt, who hails from tiny La Farge, Wisconsin, has taken advantage of the many societies UW-Platteville has to offer by joining the International Club, Alpha Lambda Delta and Phi Eta Sigma. Frank has a musical bent: depending on the time of year, the junior can be found in symphony, marching band, and pep band. And Reber has found her niche in nature, joining both the Outdoor Adventure Club and the Green Campus Project.

But if you locked all four in the UW-Platteville library together for a “Breakfast Club”-style experiment, it wouldn’t take long for Friday, Ronnfeldt, Frank and Reber to discover a common thread: all four students’ lives have been touched by the James and Joan (Brandt) Goldberg Scholarship, a fund that exists because of two young Pioneers who themselves possessed a zeal to experience all life had to offer.

The scholarship, established by relatives Gary and Beth Goldberg, honors James and Joan’s memory by helping out current Pioneers, of sophomore standing or above, who meet two simple criteria: they must be pursuing degrees in either chemistry or engineering, and they must be from Wisconsin. Beyond that, the sky’s the limit. The fund helps out a huge variety of students with an equally wide variety of dreams. Which feels appropriate, because when you dig into who James and Joan Goldberg really were, you find two lively and dynamic people who loved adventure. The two met in physics class in their sophomore year, where James caught Joan’s attention—by being the only other member of the class who had completed his homework. From then on, the two were inseparable.

Both fun and drama seemed to follow the young couple, who met while at UW-Platteville and bonded over their shared interest in STEM (Joan was a chemistry major, while Jim received a degree in mining engineering), their Wisconsin roots (Joan was from Cuba City and Jim from Port Washington), and their tendency to both work and play hard (Joan, especially, was notable for her position in her family’s musical group, the Frankie Brandt Big Band). During their time at Platteville, Joan and Jim routinely disappeared to go spelunking in nearby caves, an expedition traditionally followed up by a beverage at the Hoist House.

“We remember when they both decided to go sky-diving near Platteville,” said Gary and Beth. “Joan did great; Jim broke his leg.”

The two also shared a passion for giving back to their community; while at UW-Platteville, Jim could be found outside Ottensman Hall every Friday afternoon, grilling $1 brats to benefit the American Institute of Mining Engineers. Joan served in the National Guard Reserves, before putting her career on hold to raise a family.

Gary and Beth reported that, “after marrying, moving to the south suburbs of Chicago, and having their two daughters Kathryn and Elizabeth, Joan and James made a very comfortable home that Jim almost burnt down while burning cardboard boxes in the fireplace.  Joan grabbed the kids and the fire was put out! Despite the attempt to burn down the house, Jim was very proud of his yard, and his landscaping won several awards from the city.”

Their lives continued to be defined by community involvement and volunteerism, both for their children’s sports teams and at their schools, where Jim volunteered his time to teach elementary and high school students about minerals, rocks, and mining. Tragically, Jim and Joan both passed away much too early in life, leaving a terrible gap in the Brandt and Goldberg families. Gary and Beth, coincidentally also adventurous, world-traveling STEM majors who met at UW-Platteville before marrying and raising two children, wanted to honor the couple whose love story so closely paralleled their own. “Our hope was to be able to support students much like the two of them, starting out in their careers but needing a bit of extra financial help to get started,” they said.

Gary and Beth’s hopes have been realized. “This scholarship has prevented me from paying out-of-pocket for any college expenses this academic year, and for that I am extremely grateful,” says Tara Reber, who is planning to turn her chemistry major into a career in pharmacy. “I’ve been able to focus on my coursework without the burden of financial stress, and it truly makes all the difference when it comes to succeeding in class and enjoying all that this campus has to offer.”

Revalu Ronnfeldt, whose ambitious career goals include developing and improving undergraduate level chemistry courses, has also taken full advantage of the breathing room the scholarship has granted her: “[the scholarship] allows me to focus on my education by not working long hours and focus on becoming the best educator I can be for my future students.”

For Dayne Friday, the James and Joan (Brandt) Goldberg scholarship represented a vote of confidence: “It’s motivated me to utilize the opportunity invested in me … I will work hard to utilize every opportunity I have.”

And Hannah Frank has realized that she wants to teach; and possibly to travel. “I'll be qualified to teach any kind of science, but I'm hoping to be able to teach chemistry,” she said. “I'd like to end up as a chemistry lecturer in a small community college, either in Wisconsin or possibly out east, like in a small town in Maine.”

The ties between these students and the Brandt and Goldberg families are more than just financial. With every scholarship, the ripple effect from James and Joan’s brief and bold lives grows larger, emboldening young Pioneers to dream bigger, set more ambitious goals for themselves, and reach just a little further into the brilliant unknown.