The show must go on: Performing and Visual Arts finds creative solutions to welcome students 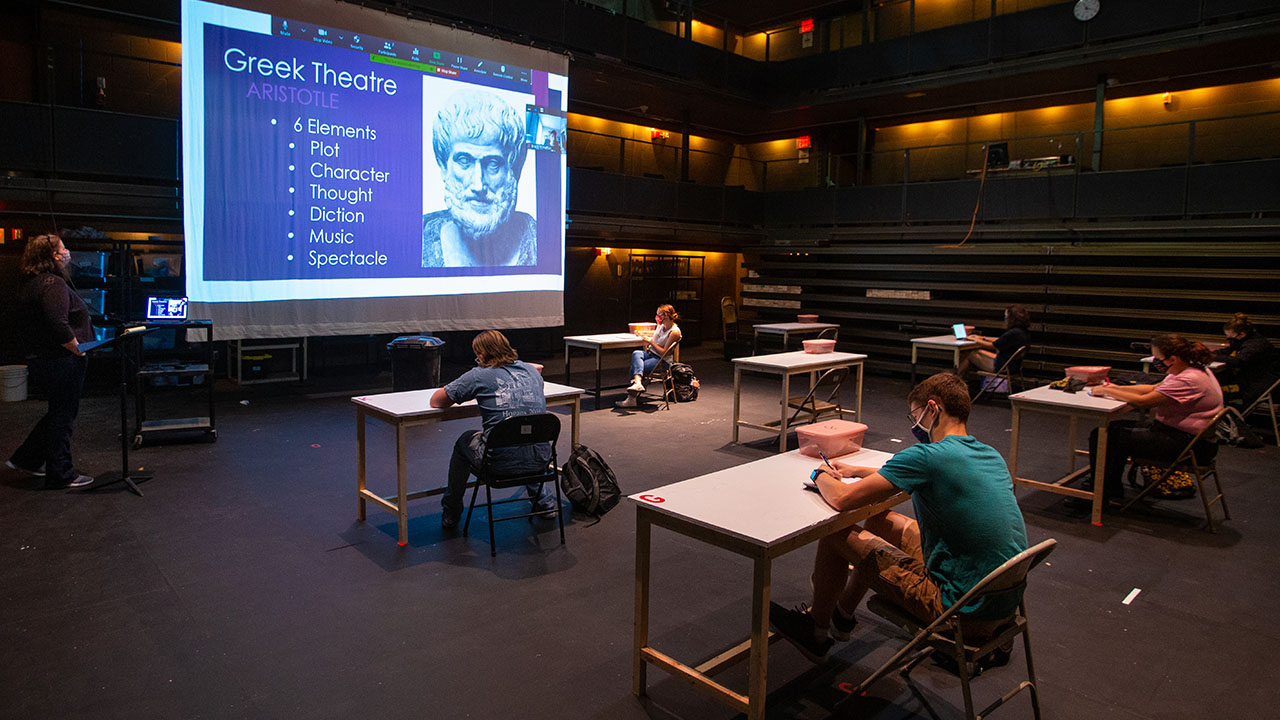 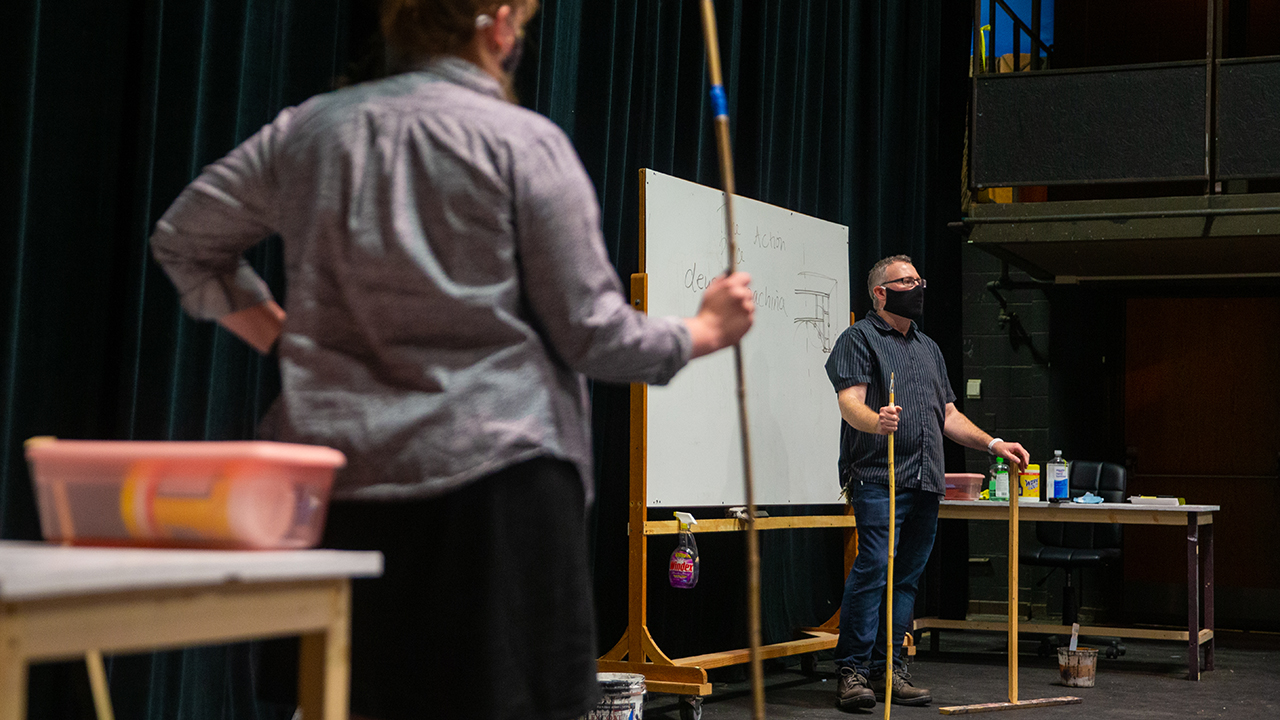 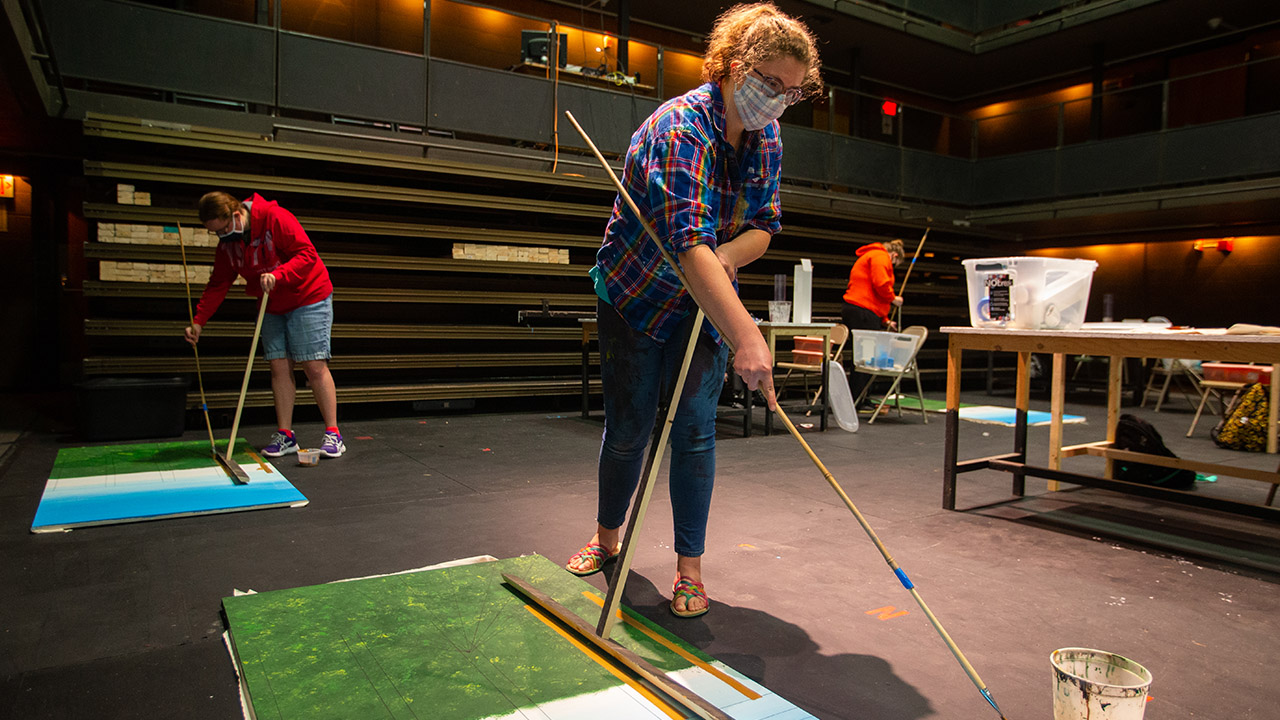 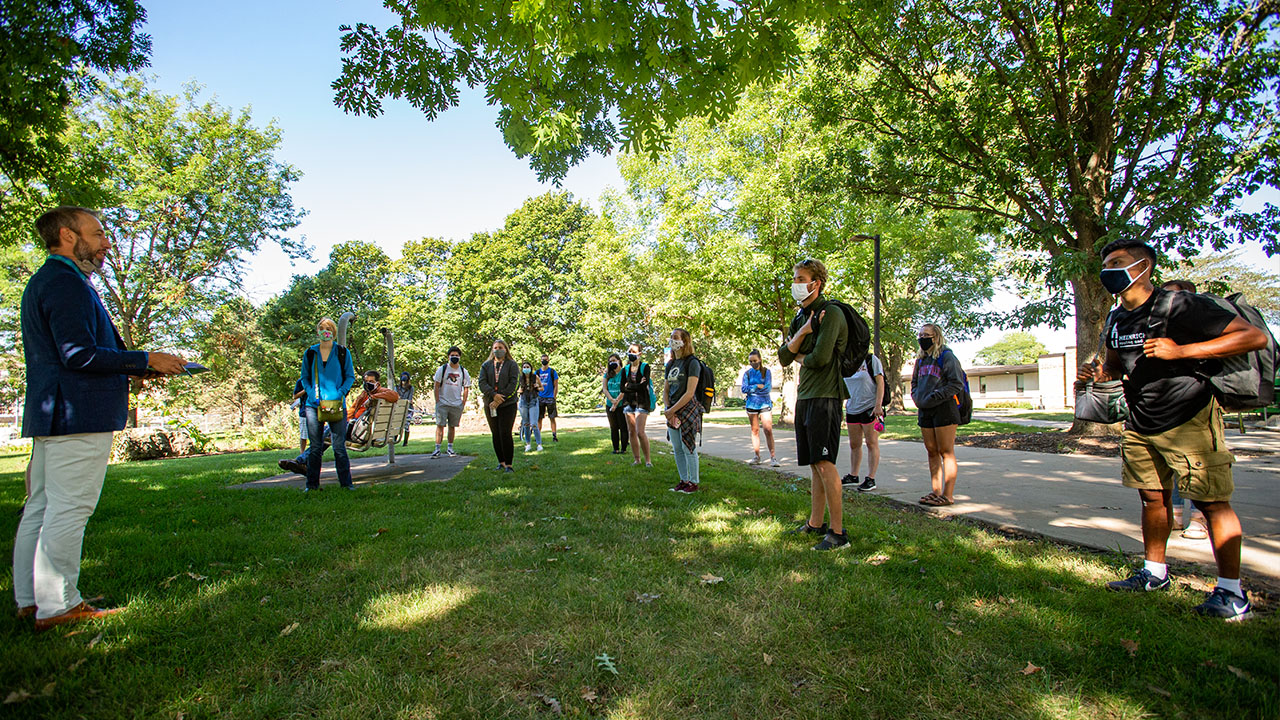 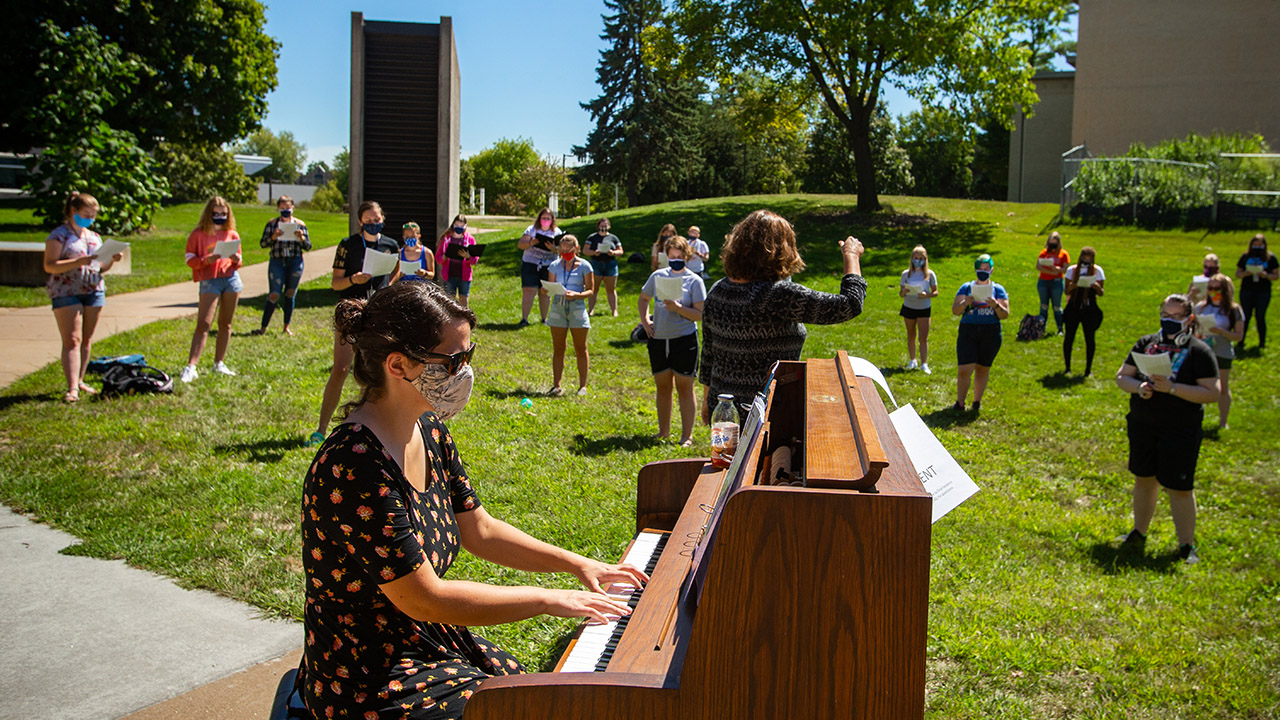 Choral practice is held outside of the Center for the Arts.
❮ ❯

Creativity is nothing new to faculty in the University of Wisconsin-Platteville’s Department of Performing and Visual Arts. But, the COVID-19 pandemic put their creativity to a new test this summer, as they planned for how to safely instruct students in theatre, music and art — areas that normally involve hands-on learning.

“We all have a unique challenge in a field that includes not just the traditional academic coursework, but also has practical work that requires lab time and students coming in to do things that presents a challenge when you can’t be near each other,” said Dr. Ann Farrelly, professor of theatre.

The easier part of the challenge, Farrelly said, was moving the physical space that her theatre students used to learn and rehearse.

“We’re lucky that we have the theatre space, and we moved a lot of our classes into the theatre. We have a capacity of about 15 on the floor of the theatre, and most of our practical classes are capped at 12,” she said.

The bigger challenge, she said, was figuring out how to build a set, design and fit costumes, and produce a show while staying six feet apart and wearing masks. The solution: incorporate the pandemic in the play, even if it is a Shakespeare comedy.

“We were lucky that we had already planned to do Shakespeare’s ‘The Taming of the Shrew,’ so we decided to ask ‘what if the pandemic were a reality for the characters in the play also?’” said Farrelly. “That’s how we’re going to get around this. The characters in the play will wear masks, stay distanced, and there will be social distance reminder signs in the set. Their reality will be the same as ours.”

Still, more nuanced details have to be considered, Farrelly said, such as the fitting of costumes and the building of sets.

“It’s hard to fit a costume on someone and not get within six feet of them,” said Farrelly. “So our shop manager and costume designer is working on some options that involve instructing the actor on how to pin the costume while staying six feet away.”

Similarly, modifications will be made in constructing the set.

“There are always situations in theatre where things need to be hung and people need to be in close proximity to each other to do so,” said Farrelly. “We are just eliminating those issues in building the set so that everyone is separated.”

Masks and social distancing aside, one of the most glaring differences in the production will likely be the lack of a live audience, but even that can be transformed into a learning experience.

“We are going to live stream it, and that affords us the opportunity to work with Media Technology Services to figure out how to stage it like a TV show,” said Farrelly.

Adapting to these changes hasn’t been without its challenges.

“The acting style that we train the students in is a very physical type of theatre,” said Farrelly. “Think about how it is in real life. As human beings, we hug each other, go near each other, grab somebody’s arm. Our job is to make what we’re doing on stage as believable as possible, so those are all things that also happen on stage. I’m glad we’re doing a comedy, because we can play on this. The one thing I said was that we can’t just ignore it. We can’t put on masks and stay six feet apart and act like nothing has changed. It won’t be the same, but we don’t know when it will be again, and we can’t give up. We have to figure out ways to do it.”

If any students are up for the challenge, theatre students, Farrelly said, should be.

“Theatre is one of the most organized and pre-planned things you can ever do, but it’s also one of the most fly-by-the-seat-of-your-pants things you can ever do,” said Farrelly. “The reason we do so much planning is because we know there is so much uncertainty in live performance. Students in theatre learn how to roll with the punches. It’s perfect for crisis management. This is just reinforcing the things we try to teach them about carrying on. I think that’s the most important thing – not to ever give up. We’re going to do our best to make this production, but if the situation changes, we’ll improvise. This is what we do in theatre.”

The Art program faced similar challenges, especially in the area of studio arts that typically require a lot of interaction, movement around the studio and hands-on demonstrations.

Gregory Nelson, program coordinator and associate professor of visual art, and Scott Steder, lecturer of art, spent a large part of the summer preparing for students’ arrival back to campus. This involved creating blueprints for each of the nine studio rooms to demonstrate a plan for the flow of student movement and placement of workstations. They taped off areas on studio floors to designate student workspaces, walking lanes and traffic flow. Steder led the way in constructing plexiglass barriers – used across several disciplines – the biggest one measuring 12-by-4 feet.

While space challenges have put a restriction on the size of projects students can work on, Steder said they are making the best of the circumstances by changing the focus of the work.

“In our sculpting class, we have to do a smaller project,” he said. “The size of the piece has to be scaled down. But we’re working around it; now we’re focusing more on the details and the craftsmanship. You can still spend the same amount of time on small sculptures as you do on the bigger ones, but that means the quality of work has to be better.”

“For the most part, people are happy to be back and in the same space making art,” said Nelson. “They understand that we’re figuring this out as we go. It’s collaborative, just like everything in our classroom is collaborative, and I think students are getting that.”

In the Music program, preparation focused on keeping students and faculty safe while continuing with individual lessons and small ensembles. Allen Cordingley, saxophone instructor, said that while there have been many research studies exploring the amount of aerosols generated by each instrument, varying factors such as room size and set-up and ventilation create different obstacles, making the data challenging to track. However, the program’s number one priority was to create the safest possible environment for the musicians.

With the help of Steder, plexiglass barriers were made and installed in each of the rehearsal rooms. Cordingley said they are also installing high-powered air purifiers in offices and rehearsal rooms.

Some teachers are electing to teach lessons outside if they can or in the biggest classrooms available. The concert hall is used for rehearsals for smaller ensembles. Instead of the biggest bands practicing together, Cordingley said they’ve broken off into smaller chamber groups. He is working with Media Technology Services to compile collage videos of the groups – the closest way they can all play together.

“I’m really proud of how everyone has responded in Doudna,” said Cordingley. “Students are so happy to have some live interaction again. Last night was the first rehearsal I’ve had with more than five people since February. It was so nice, and students were really excited to be making music together again. This wouldn’t be possible without our chair, Dr. Laura Anderson, and administrative assistant, Amy Udelhofen. They were paramount in getting us on right track and have worked tirelessly to keep us going.”

As the faculty across the theatre, art and music programs work to implement all of the modifications they have spent the summer planning, Farrelly said that she recognizes people may ask “why bother to do it?” Her response is that it’s more than just teaching students who are majoring and minoring in those areas.

“This whole situation has been reminding us just how essential the arts are to our souls,” said Farrelly. “Being able to experience them is important. As best we can, it is vital to keep them alive, so that people have something they can watch or enjoy that takes them slightly out of the moment, in order to carry on.”