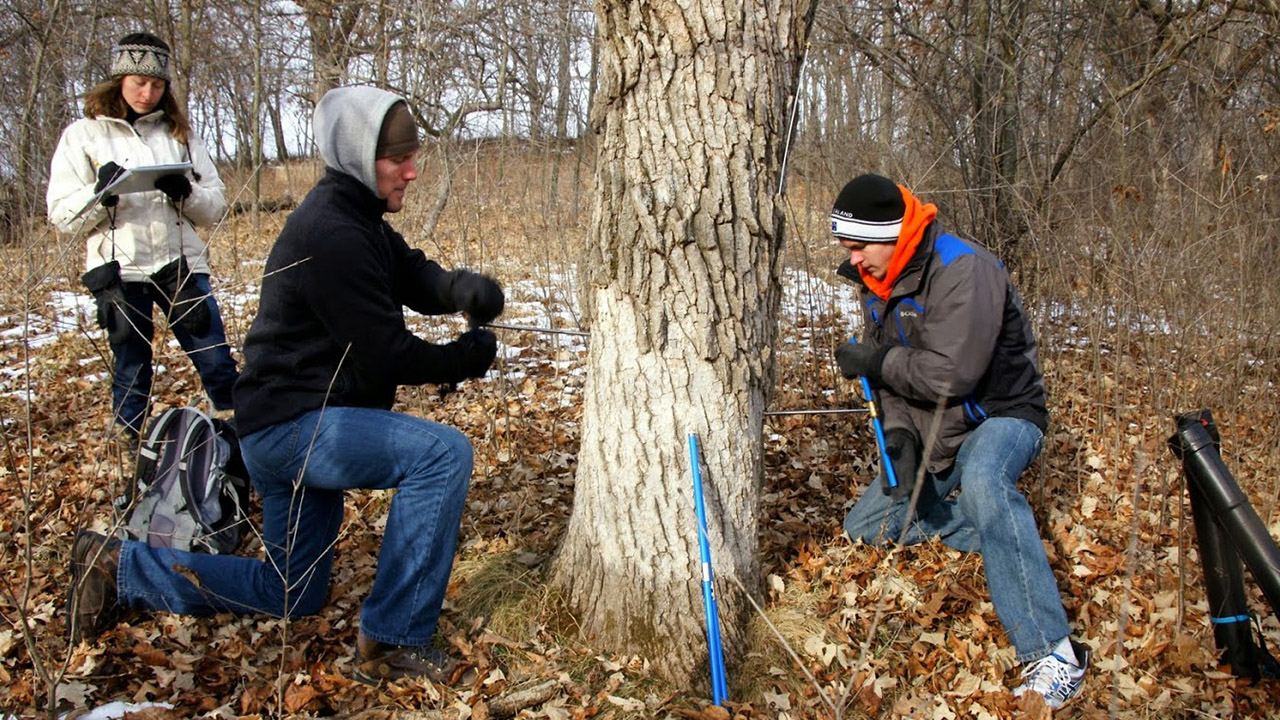 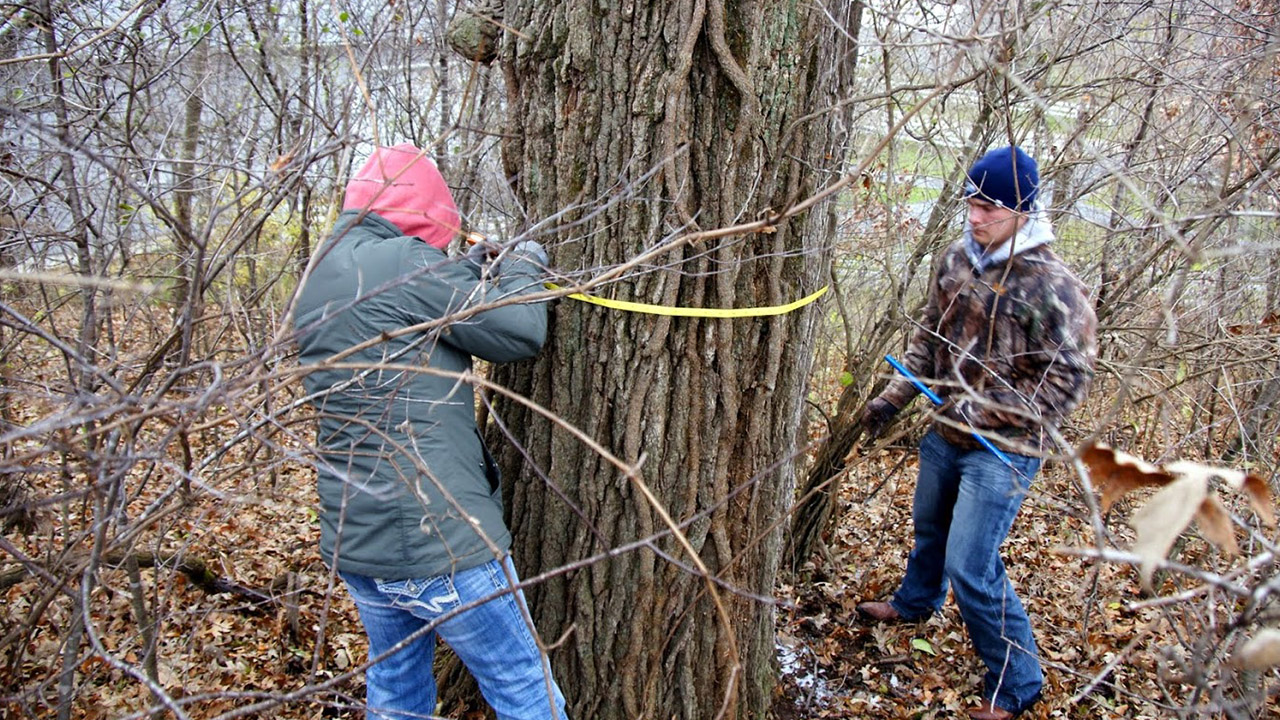 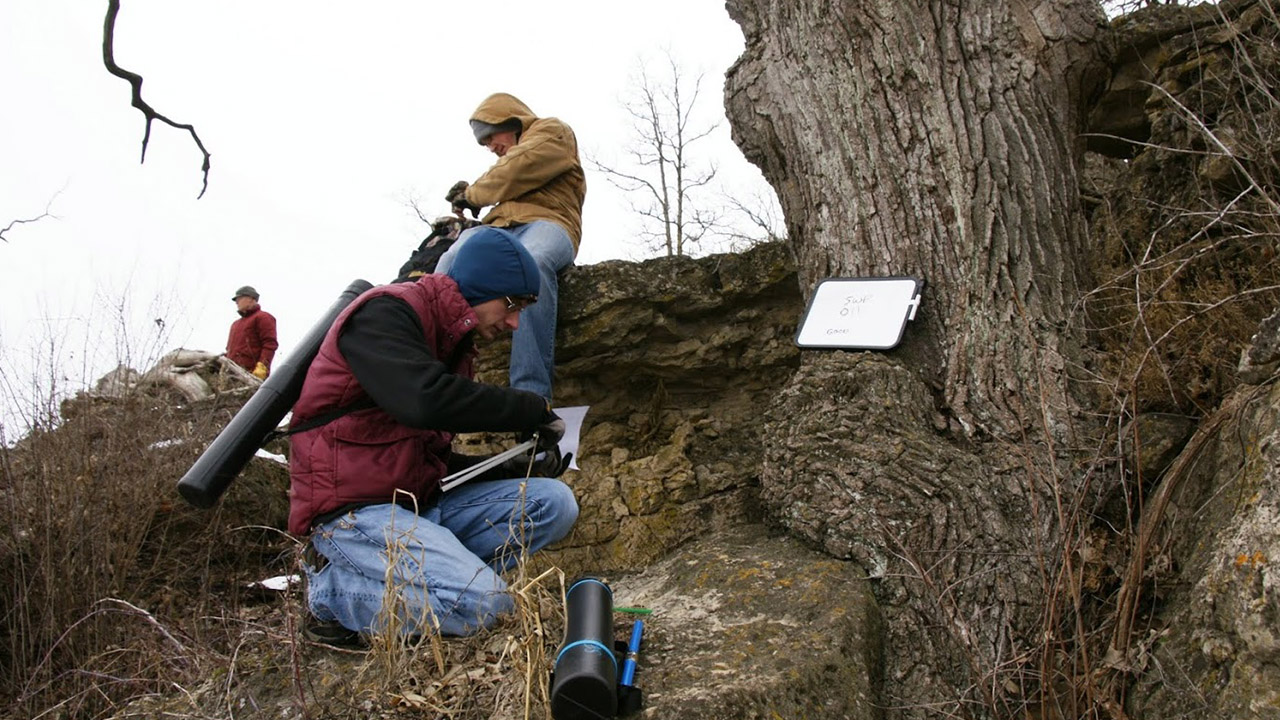 Thousands of hours of field work and undergraduate research, conducted by more than 75 University of Wisconsin-Platteville students spanning seven years, has come to fruition. Dr. Chris Underwood, associate professor of geography and department chair; Dr. Evan Larson, professor of geography; and alumna Sara Allen, a 2013 history and geography graduate, co-authored “The Driftless Oaks: A new network of tree-ring chronologies to improve regional perspectives of drought in the Upper Midwest, USA.” Their paper was published this fall in the academic journal Progress in Physical Geography: Earth and Environment.

“To see one of our students not only engage in research, but take it all the way to the end and be a co-author on a peer-reviewed scientific publication, is one of the greatest things we can achieve as faculty,” said Underwood.

“To move from raw data in the field to a published manuscript that's now out for an international audience is a huge investment of time and energy; it’s pretty cool,” added Larson.

The project focused on oak trees, due to their rich history of being rooted before modern landscapes of fields and pastures. According to Larson, oak trees share a story of environmental changes throughout hundreds of years which provides information on the effects of climate and drought in the Driftless Area.

“We needed to start with the oaks, because of their connection to the past, their role at the time of prairie and savanna,” he said. “When we first started this project, we used historical aerial photographs. We looked at what the landscape looked like in the 1940s and tried to find places that looked like they had old oaks at that time.”

Early sampling yielded some samples, but much of southwest Wisconsin is in private land. To help gain access to more oak trees, Allen and Larson wrote a paper published in the Wisconsin Natural Resources magazine about the research project. Nearly 260 landowners reached out. Students traveled across Southwest Wisconsin and collected tree ring samples from 420 living oak trees, 15 stumps and 17 beams from six historic structures at 46 sites.

“The connection people feel with their oak trees is palpable,” said Larson. “There was this affection for the land – to have that interaction between the students, landowners and the university; it was amazing.”

Underwood and Larson wanted to core oak beams from historical structures to push their data even farther back in time. They were able to use the samples to interpret how the arrival of Europeans to the Driftless Area affected the land. They found many of the trees used in these structures were cut down in the mid-1800s.

“At a regional scale you see this growth pulse in the trees that lived through this period that's not related to climate at all, it's actually related to land clearance with Europeans arriving on this landscape,” said Larson. “Without that cultural history, it would have changed the way we were able to interpret the climate story that emerged from these growth rings.”

“By taking cores from oak beams in those buildings we can also give the owners a better idea of the build date for their structures,” said Underwood.

Another aspect of their research was the correlation of drought and agricultural production. Larson said that over the past 80 years, corn and soybean yields in Grant County became increasingly correlated with climate variability, with higher yields in years of abundant moisture and lower yields in drier years. This relationship was closely mirrored by the growth patterns of the oaks that were sampled, thereby giving a sense of growing conditions over the past 300 years.

“The growing season has become increasingly tightly linked with moisture conditions,” he said. “We have consistently produced more corn and soybeans over the past 80 years, but at the same time our yields are potentially becoming more connected with year-to-year changes in climate, which means more volatile. That would be fine if climate was stable and we could see where it's going, but based off of the record that we have it has been wetter on average over the past 20 years than at any point in the last 300. We could be in for some rough times, depending on how climate continues to change.”

The outcome of their research has been gaining attention from experts in the field of dendrochronology, including researchers from the Lamont-Doherty Earth Observatory at Columbia University and the Harvard Forest.

“The kind words and complimentary nature of those communications have been incredible,” Larson said. “We love teaching and research is a wonderful way to teach. Absolutely. It doesn't always end in publications. This is really special. This is an exceptional outcome made possible by a lot of people investing a lot of time.”

Underwood is appreciative of all the support shown from area community members who invited their students to their property.

“It’s a perfect example of the modern-day Wisconsin Idea of how universities, including UW-Platteville, are still reaching out to the broader community as partners in education,” he said. “The opportunity to involve students on this is by far the greatest personal achievement. To know how many students had been in some way involved in this project, that’s something I’m really proud of.”