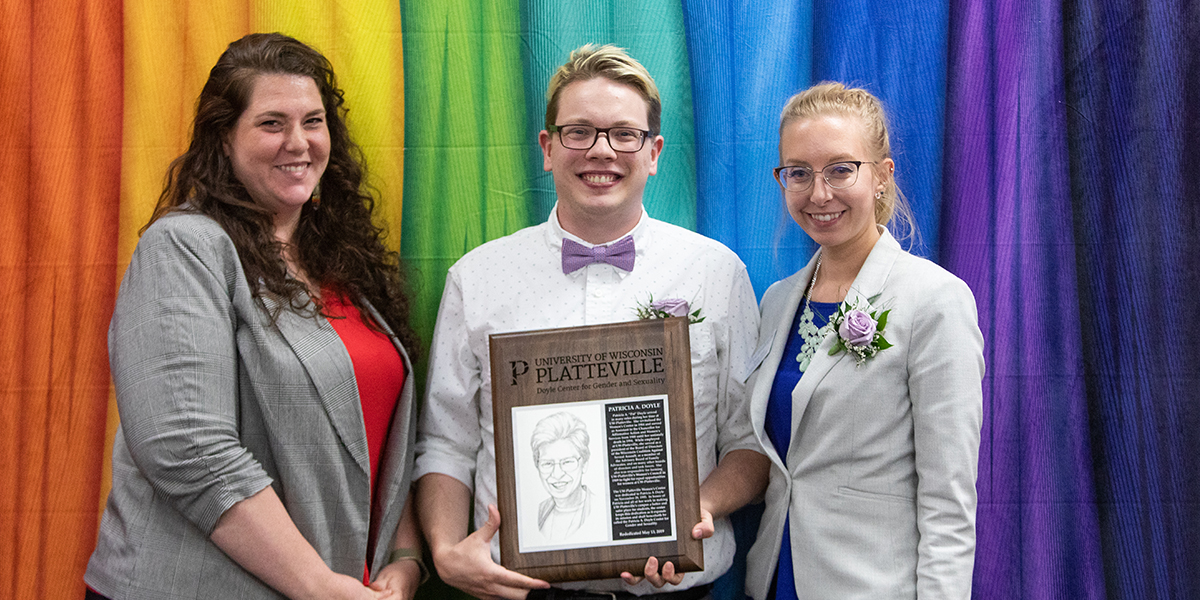 PLATTEVILLE, Wis. – Officials at the University of Wisconsin-Platteville held a ceremony on Monday to honor the late Patricia A. Doyle and rededicate the Patricia A. Doyle Center for Gender and Sexuality in her memory. The rededication ceremony was held as part of the center’s annual end-of-the-year celebration. A new plaque to honor Doyle was unveiled during the ceremony.

Doyle held a number of positions at UW-Platteville that left a vast impact on the campus and community. She was appointed the first director of the Women’s Center in 1984, and immediately grew the center through increased programming and the creation of a board of directors. In 1986, she served as Affirmative Action officer, and in 1988 she was appointed assistant to the chancellor for Affirmative Action and Women’s Services. She served on the Task Force on Sexual Assault, Women’s Studies Program Council and the Board of Advisors for Wisconsin’s project on sex equity for adolescent girls. In 1989, she created the UW-Platteville Women’s Council.

Doyle passed away in 1994, and the following year the name of the women’s center was officially changed to the Patricia A. Doyle Women’s Center. In the fall of 2014, the center was re-opened as the Patricia A. Doyle Center for Gender and Sexuality, with a mission of providing a supportive, equitable and safe environment for all persons on campus in relation to gender and sexuality.

During Monday’s rededication ceremony, Angela Miller, assistant chancellor for diversity and inclusion and chief diversity officer, spoke about the importance of the center.

“The Doyle Center plays a critical role in our support for women and folks from our LGBTQ+ communities on campus,” said Miller. “This center has become a family in some ways for so many on campus and continues to provide institutional advocacy for bettering the experience of all campus community members. It’s truly an honor to share space tonight which remembers the legacy of Patricia Doyle and recognizes individuals on our campus who have continued moving that work forward.”

Jason Roth, a junior women’s and gender studies major and events and office assistant in the Doyle Center, delivered a presentation on the life and legacy of Doyle. Roth spent the semester researching Doyle and her impact on campus, and organized the rededication ceremony.

“The Doyle Center didn’t have anything in the center that explained who Pat Doyle was,” said Roth. “We have a small obituary posted on the website, but other than that, not a lot has been shared. After beginning my research, I realized that she has done amazing work for our campus. She planted the seeds for future generations. Many who knew Pat personally believe that if it wasn’t for her, we wouldn’t have the Doyle Center, and I completely agree.”

For more information about the Patricia A. Doyle Center for Gender and Sexuality, visit campus.uwplatt.edu/doyle-center.