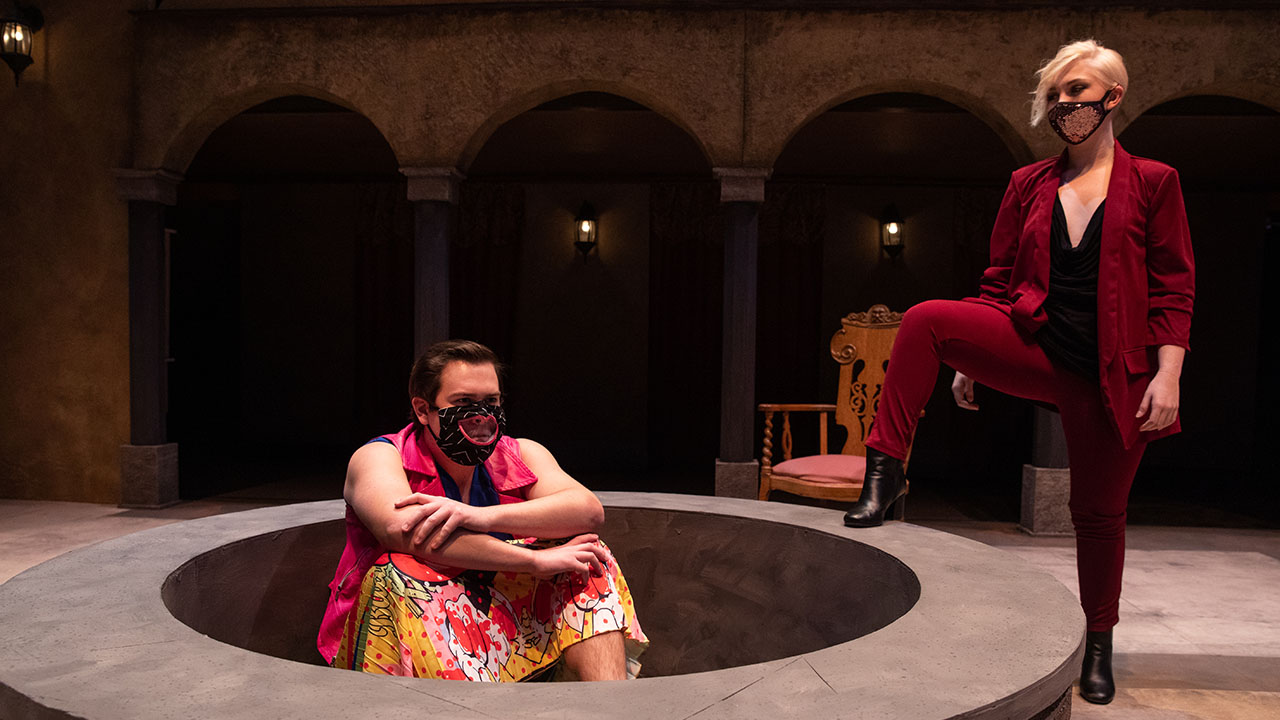 Jon Hutson, as Kate, and Isabelle Sander, as Petruchio, in "The Taming of the Shrew." 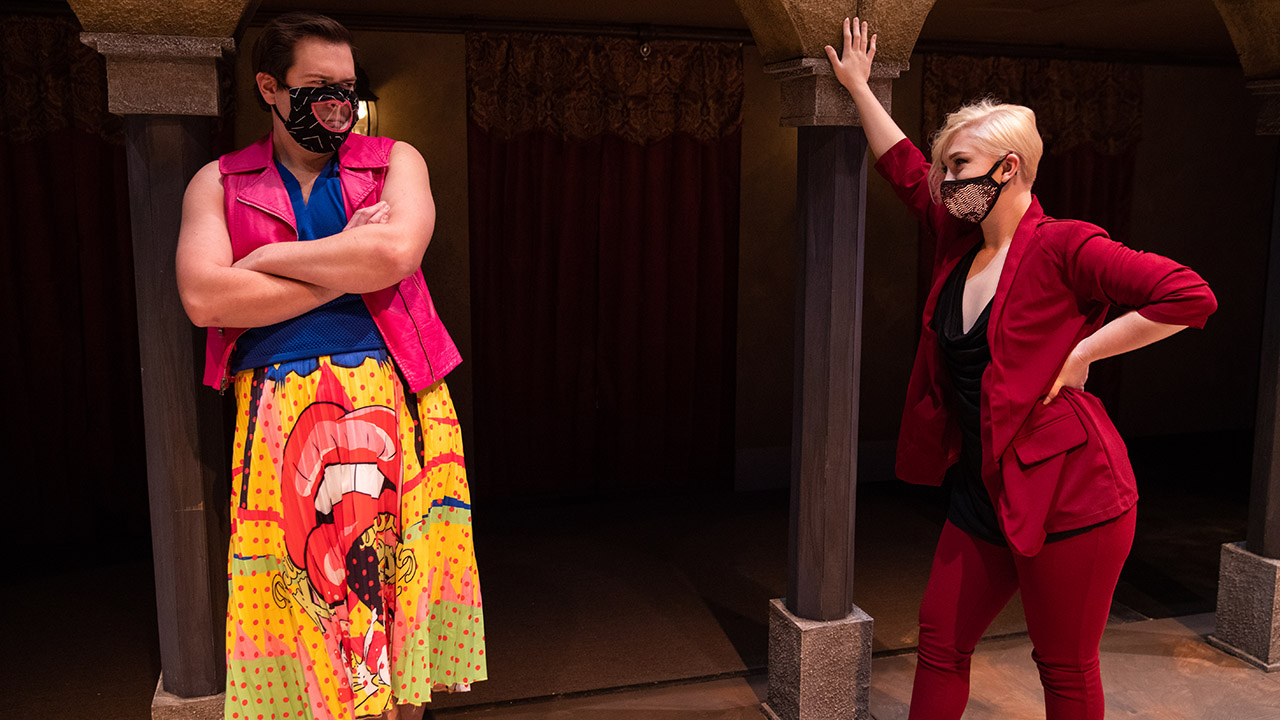 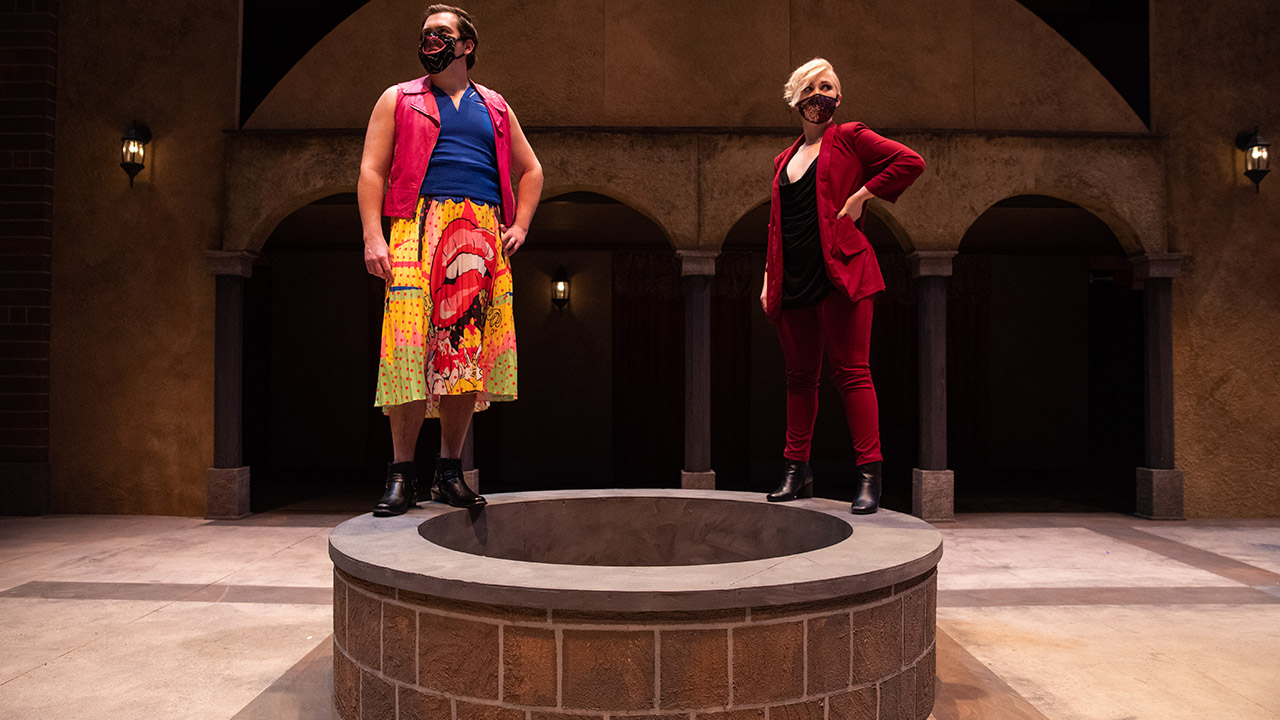 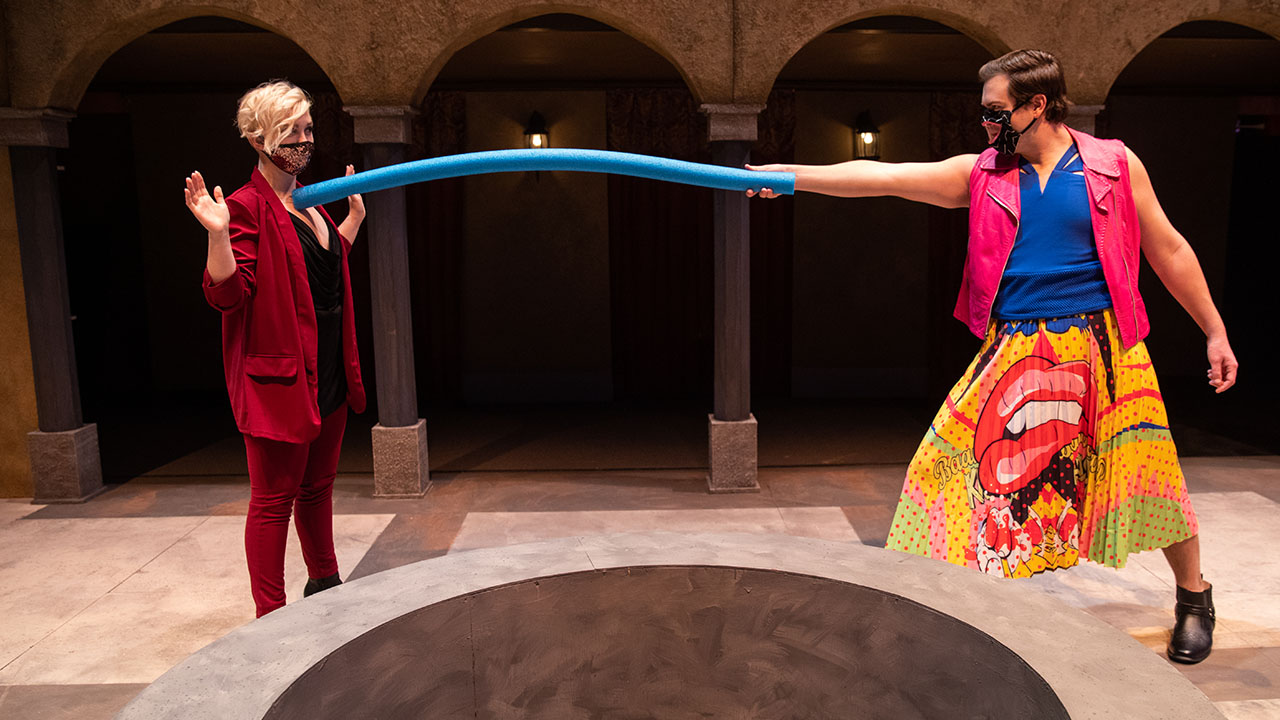 The University of Wisconsin-Platteville’s Department of Performing and Visual Arts-Theatre and Pioneer Players will kick off their 2020-2021 season with William Shakespeare’s “The Taming of the Shrew.” This comedy about the hard-to-control Kate and the overly-confident man who sets out to “tame” her, Petruchio, is a well-known Shakespeare play. It has been a mainstay on stages and in films since it was written in the 16th century. Performances will be livestreamed on the UW-Platteville Pioneer Players Facebook page, running Nov. 12 through Nov. 14 at 7:30 p.m., and Sunday, Nov. 15 at 2 p.m.

According to Ann Dillon Farrelly, professor of theatre and director of the production, there were some obstacles to overcome. “We were presented with two challenges when deciding to produce this play,” said Farrelly. “The first was how to deal with the blatant misogyny (and the celebration of that misogyny) that makes the play difficult to reconcile in the 21st century. The second, and perhaps even more important challenge, was how to adapt theatre performance to the reality of Covid-19.”

The first challenge involved the premise of flipping the gender of the characters. In the world of this production, the women run the show and sell off their sons to the highest bidder.

“We wanted to see what would happen if we put men in the shoes of the women. What happens when Kate is a feisty man being tamed by an arrogant woman? I’m not entirely sure how this will go, but it has been fun to find out,” said Farrelly.

As to dealing with the coronavirus, the theatre program adopted strict measures to make the rehearsal, construction and performance of the play as safe as possible. In addition, the pandemic was incorporated into the concept of the play. According to Farrelly, “We have set the play in Padua Beach, Florida, in the present day and the characters are under the same strict measures as we are. They wear their masks, wash their hands and watch their distance.”

“These students have been remarkable during these stressful times. They have been enthusiastic and responsible. I think they are just very happy to be back doing what they love, and they are happy to take whatever precautions are necessary for the show to go on,” said Farrelly.

Joining Farrelly on the production team are associate professor of theatre and resident designer Jeffrey Strange, who is providing both the scenic and lighting designs and senior lecturer and resident designer, Sarah Strange, as costume designer. Fine arts-theatre major Amber Glassel is the stage manager. UW-Platteville Media Specialist Tyler Tollefson is also joining the staff as the director of the live stream. Tollefson and his staff, students Kyle Pozorski and Alex Manske, will be shooting the live productions.

“People may wonder why we would go to such lengths to produce a play in the midst of such uncertainty, and I suppose that’s a fair question. And while professional theatre has taken a severe hit over the last several months, we are in a position to attempt to adapt and still do theatre. For those of us who can keep going, I think it is important that we do. Our souls need it,” said Farrelly.

This production will be live streamed and presented free to all on the UW-Platteville Pioneer Players Facebook page (A Facebook account is not required to watch).  Even though the show is free, there will be an opportunity for audience members to make a donation to the University of Wisconsin-Platteville’s Pioneers Helping Pioneers Fund. The university created this fund to protect the health and safety of students and families struggling during such difficult times. The COVID-19 pandemic has left many students with obstacles to overcome. Donations can help provide students with groceries, assist with rent payments or any other unanticipated expenses that have occurred. All donations will go directly to the Pioneers Helping Pioneers Fund.

“We hope this free offering of live performance will help lift everyone’s spirits. And we also want to make sure that our efforts go to a good cause,” said Farrelly.