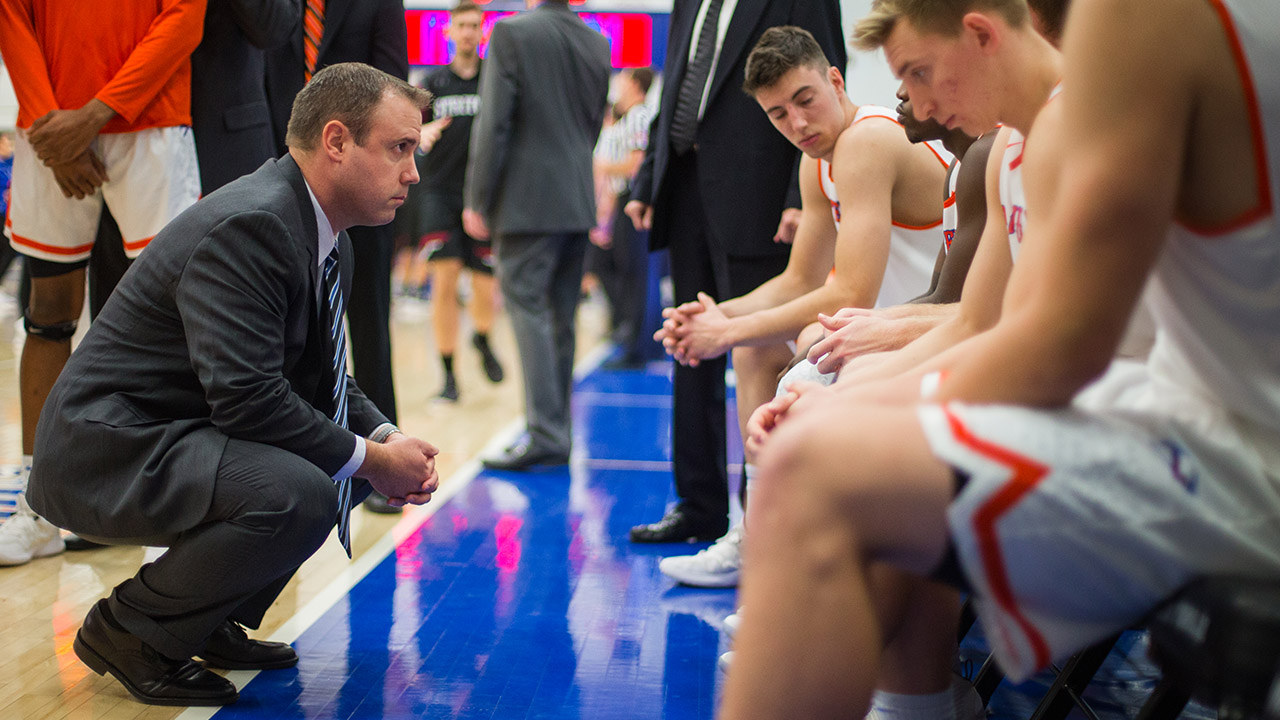 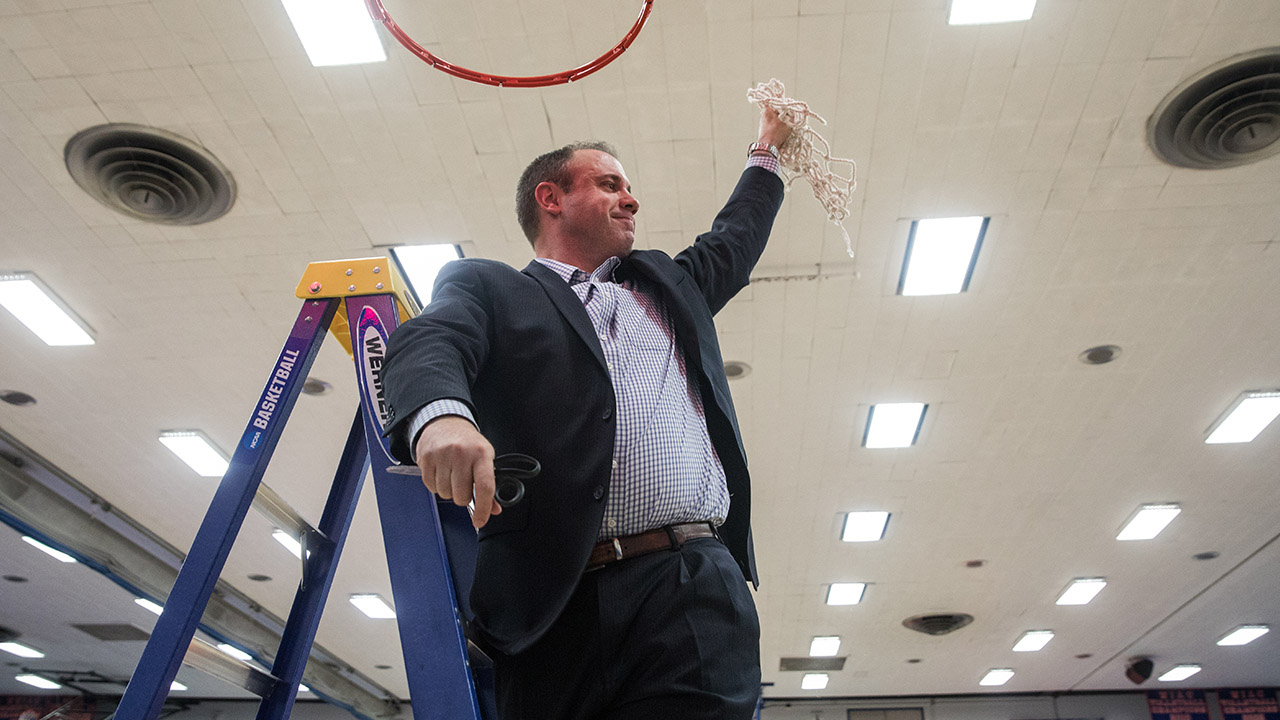 Jeff Gard just finished his 11th season as head basketball coach of the University of Wisconsin-Platteville. Being in athletics was always Jeff’s dream and goal as a young man growing up in Cobb, Wisconsin. He was surrounded by coaches who helped mentor and guide him along the way, and coaching was his opportunity to stay in athletics. Jeff’s dad, Glen, was his first coach as a young boy, then he had a front row seat watching his older brother Greg ascend from a junior high basketball coach to Big Ten Coach of the year for the Wisconsin Badgers.

"At a young age I always knew I wanted to pursue a career in athletics," Jeff said. "Once I saw my 40 time and vertical, I knew being a professional athlete was out of the question. Having our dad coach us growing up and having outstanding high school coaches in football, basketball and baseball, I was able to see firsthand how much of a positive impact a coach could make on the student-athlete's life."

While working on his education degree from UW-Platteville, Jeff began his own coaching climb. First working for legendary coach Jerry Petitgoue at Cuba City for three seasons, followed by one season at Southwestern before being hired by Paul Combs at Lakeland College. His two seasons at Lakeland were the only two years of his post-high school life he spent away from UW-Platteville.

Jeff joined Combs staff at UW-Platteville when Combs was hired in 2004 and earned his second degree from UW-Platteville in 2005. In 2009, he was hired as head coach of his alma mater. In the past three seasons, the Pioneers have won three WIAC championships, were selected to three NCAA tournaments and Jeff was twice named WIAC Coach of the Year along with numerous other awards.

Using Greg’s platform as the head coach of the Wisconsin Badgers, the Gard family started the “Garding Against Cancer” initiative in the help against cancer in memory of their father Glen who passed away after a six-month battle with Glioblastoma Multiforme Cancer in 2015.

Jeff and his wife Amy reside in Platteville and are the proud parents of two children, Hannah (6) and Vincent (4).

You have spent a majority of your adult life at UW-Platteville, as a student, then assistant coach and now head coach. The campus has changed a lot from 1997 to now, how has that helped the men’s basketball program in recruiting?

A lot has changed structurally on campus, from the addition of the Markee, new residence halls and engineering buildings to renovations to Ullsvik Hall and other academic and administrative buildings on campus. Obviously from the athletics side of it all the upgrades we’ve made to Williams Fieldhouse (specifically Bo Ryan Court and the Coach Wadewitz Locker room) to the additions of the weight room and practice facility have all been outstanding additions to our program which assist with our recruiting.  However, over the years the one thing that remains the same is the love and devotion this community has for not only men’s basketball but for the university and student body as a whole. I’m not sure you can go anywhere else in the country and find a connection between a community and a university as we have here in Platteville. It truly makes the University of Wisconsin-Platteville one family!

When identifying a potential student-athlete for the men’s basketball program, besides the athletic ability, what are you looking for in the potential recruit?

Character and teachability. Being a father of two young children in Hannah and Vincent, I want young men in my program that Amy and I would feel comfortable with watching our kids if we get in a pinch and need a sitter.  I can honestly say that the young men that put on the Pioneer jersey are looked up to by Hannah and Vincent as big brothers and a part of our family.  We also want guys within our program who are hungry to achieve greatness not only for our team but for themselves.  We feel that this is best accomplished by having men in our program that have more questions than answers. These types of people are always searching for more and never get complacent with where they are at in life. This mentality ultimately leads to success not only on the court but off the court as well.

When a men’s basketball student-athlete finishes his eligibility, what do you hope they take away from their four-to-five years in the program?

Relationships! Championships and wins are great, however they only last for a short moment, and eventually the trophies collect dust. What lasts forever are the relationships our student-athletes will have with each other. There is something special about battling through the blood, sweat and tears with the men to your right and left that will last a lifetime. One of the most rewarding moments for me is seeing our guys together celebrating at weddings, golf outings or even alumni days.  It’s not until they take off the uniform for the final time that they truly appreciate the bond that had been made with each other.

Coaches put a lot of hours in, from on court coaching, recruiting, teaching classes and fundraising. How do you balance your home life to your coaching life?

That’s a multipart answer, and number one is Amy!  This career is not possible without the support at home and Amy is my rock.  Without her love and support, I’m not able to do what I love to do. Number two, as best as possible, I try to make my student-athletes feel a part of our family.  As mentioned above I want Hannah and Vincent to see the guys on the floor as their big brothers. Number three, don’t lose twice. I’ve learned over the years that if you have a bad day in the office or a bad game don’t bring it home with you.

The Gard family has raised over $4 million dollars with the Garding Against Cancer initiative in the last four years; could you provide information on how the initiative started, where the funds are being used and how people can donate or volunteer in the fight against cancer?

Unfortunately, cancer hit home with our family in 2015 when our father Glen lost a six-month battle with Glioblastoma Multiforme, a form of brain cancer.  Prior to this episode, Greg and I were involved with the Wisconsin chapter of Coaches vs. Cancer. This campaign is great as it also raises money for cancer research, however our family felt that with our recent circumstances and Greg’s platform as the head coach at the University of Wisconsin it was a great opportunity to work through dad’s motto of “Think Globally, Work Locally”. Dad was very entrenched into helping locally first and foremost and therefore the idea to help our home state became a top priority. We wanted to think globally but help locally, just as our father did for much of his life. The Garding Against Cancer initiative is to have a direct and visible impact on treatment and care for Wisconsin patients with all the funds going towards the fight against cancer right here in our home state.

Along with Garding Against Cancer, our mom, Connie started up the Iowa County Cancer Coalition, whose sole mission is to offer financial assistance to active cancer patients who are residents of Iowa County, Wisconsin. All monies raised will be given to those diagnosed with cancer and currently being treated for cancer. Treatments may include chemotherapy, radiation, doctor visits, pain management, terminal and hospice. Assistance will be provided by giving gas cards, grocery cards, or paying a bill directly for the patient.

To learn more about these two initiatives please visit the following websites: