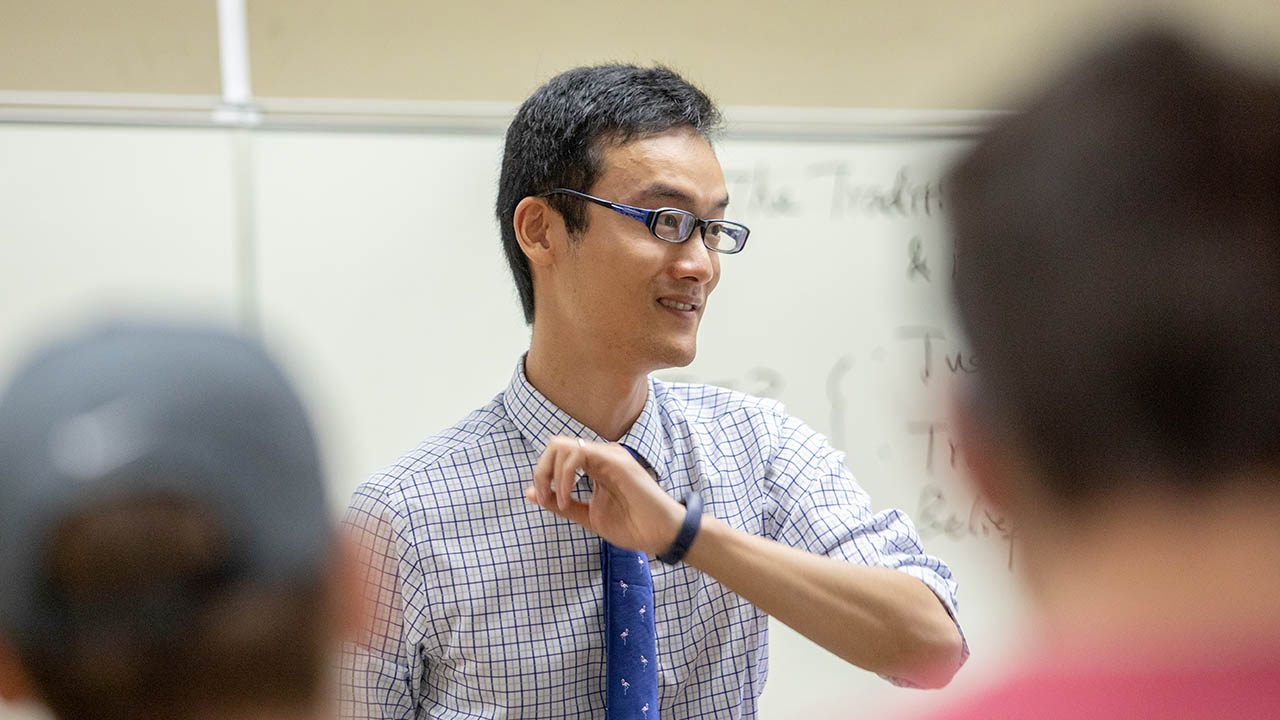 It was the idealism of youth and a persistent curiosity that initially drew Dr. Yi Tong, lecturer of philosophy at the University of Wisconsin-Platteville, to his chosen field.

Tong, who has taught at UW-Platteville since fall 2017, was born and raised in Hangzhou, the capital city of Zhejiang Province in China. In 2004, when he was 19 years old, he began taking courses at East China Normal University in Shanghai, in pursuit of a degree in finance for a future career in banking.

From fairly early on, however, Tong decided he did not want to live a life focused on making money. While in college, he was curious about many things, ranging from mathematics to history. While he particularly enjoyed thinking about what he described as “useless stuff,” such as, “is language necessary for thought, or is it the other way around?” he found the various subjects in finance uninteresting. Then, when he was a junior in college, he met a philosophy teacher who was offering a course on Ludwig Wittgenstein’s later philosophy. He sat in on the course and it was, for him, a revelation. As his undergraduate years were drawing to an end, he thought he would give philosophy a try.

And so, after earning a degree in finance from East China Normal University in 2008, Tong abandoned his path toward becoming a banker in Shanghai and began graduate work in philosophy at the University of Minnesota-Twin Cities in Minneapolis. In 2016, he earned a Ph.D. from the institution.

Then and now, Tong’s special interests include questions of methodology, philosophy of language and ethics. He is also interested in philosophy of law, an area where many important aspects of modern social political life and issues such as individual freedom, responsibility and luck intersect.

What do you love most about teaching?

First of all, teaching can very often help me achieve clarity in my own thinking. Clarity is a virtue of the kind of work I do. So, even if what I am saying is clearly wrong, I want to make sure that I am wrong clearly.

Second, there can be moments (in classroom discussions, meetings during office hours or reading a student’s written work), where I see that a student is seeing different things amongst the familiar or mundane (or is seeing them differently). That usually means a student is beginning to develop an ability, or more important, an overall willingness to think independently. That is the most rewarding kind of experience that I think a philosophy teacher could ever have.

Why is the study of philosophy important to a liberal education?

That sounds quite desirable, right? But how could we be free and have power over our own lives then? True, we are not tied up; nor are we in shackles. In that sense, all of us are free. But we may not be free in the sense that, for example, we are subjects to all kinds of prejudices, biases, deceptions or even downright manipulations. They could come from sources ranging from harmful political ideologies to everyday commercial influences (some of them don’t just sell products, but also values, and hence, implicitly, a way of living).

So, freedom in the classical sense is not some external condition we could passively have or have not, but essentially established through an educational experience of growth and discovery, through which we become knowledgeable, thoughtful, critical, ethical and engaged public citizens. A philosophy course can contribute exactly toward reaching these goals.

How do you hope your philosophy courses impact students, now and in the future?

I am aware that the majority of my students will not go into academic philosophy (I think that is a good thing, by the way). With that in mind, I am hoping that my philosophy courses will impact my students in two specific ways, both of which, in some ways, go back to the ideals of a liberal education discussed above.

One is that of culture. Reading Plato, Aristotle, Descartes, Hume, Kant, Locke, etc. and getting some idea of what they said is what “being cultured” means, according to a central meaning of the word “culture.”

The other is more practical. It is widely thought that the STEM skills are what the students need in order to prepare themselves for the job market. But there has been increasing recognition that the “soft skills” are at least as essential for long-term success. According to research done by Google on its own employees, the primary characteristics of success in Google are, perhaps surprisingly, some “soft skills”: communicating and listening well, possessing insights into others (others with different values and points of view), having empathy toward and being supportive of one’s colleagues, being a good critical thinker and problem solver and being able to make connections across complex ideas. These are precisely the skills you will get in philosophy courses.

What would you like people to know about the study of philosophy that they may not realize?

The study of philosophy seeks truth and understanding. Philosophers are motivated by curiosity. In this sense, I think it forms a continuum with other forms of inquiries, like the sciences. On the other hand, at least according to the classical tradition, the study of philosophy should offer us some help: it should bring humanity helpful advice. Philosophical questions are not aimless or out of idle curiosity. Philosophers should help address problems (ethical, social and political) that concern all of us.

However, given the way philosophical inquires proceed, these two motives can often seem to come into conflict. First, in what way the study of philosophy can address our concerns is not entirely obvious. This is partly because philosophy often attends to the unobvious roots of our problems: for example, the debates around the moral justification of capital punishment and how we treat other animals can be intricately intertwined with the basic epistemological issue of how we come to know the feelings and perspectives of others. Second, the commitment to truthfulness also means there is no determination a priori what kind of help philosophy can offer, if at all.

Finally, let’s acknowledge that philosophy is hard, and good philosophy is done extremely slowly. This may turn many people away, before they wait out for the answer, if that is available at all. But the two motives, seeking truth and offering help, cannot be separated from each other: philosophy can offer help only by seeking truth, in a manner that demonstrates truthfulness. This means that philosophy can perhaps best flourish in a community or environment where there is patience, open-mindedness and analytical scrutiny.

What do you enjoy doing when you are not teaching?

I enjoy playing an ancient board game called “Go.” Two players take turns to place black and white stones on a board that has a 19-by-19 grid of lines. The objective of the game is to get territory by encircling your opponents’ stones (thus attacking them) or simply encircling territory peacefully.

The game was originated in China more than 2500 years ago, and it is primarily played in East Asian countries like China, Japan and Korea, but it is increasingly popular in the Western world. It is a fascinating game that really combines exercising analytical thinking, strategic planning, and imagination in a perfect way. It is also a tool for personal enlightenment, as was its role in traditional societies like Japan before 1868.

In spring 2019, I taught a Special Topics course, “Go and Philosophy,” and it worked out really well. I think it is a good companion for my philosophical journey. The downside is that both activities, doing philosophy and playing Go, involve too much sitting, so I am trying to work out more. If anyone would like to know how to play this game, or simply want to catch a game, swing by my office!

To nominate someone for the Pioneer Spotlight, email pr@uwplatt.edu.