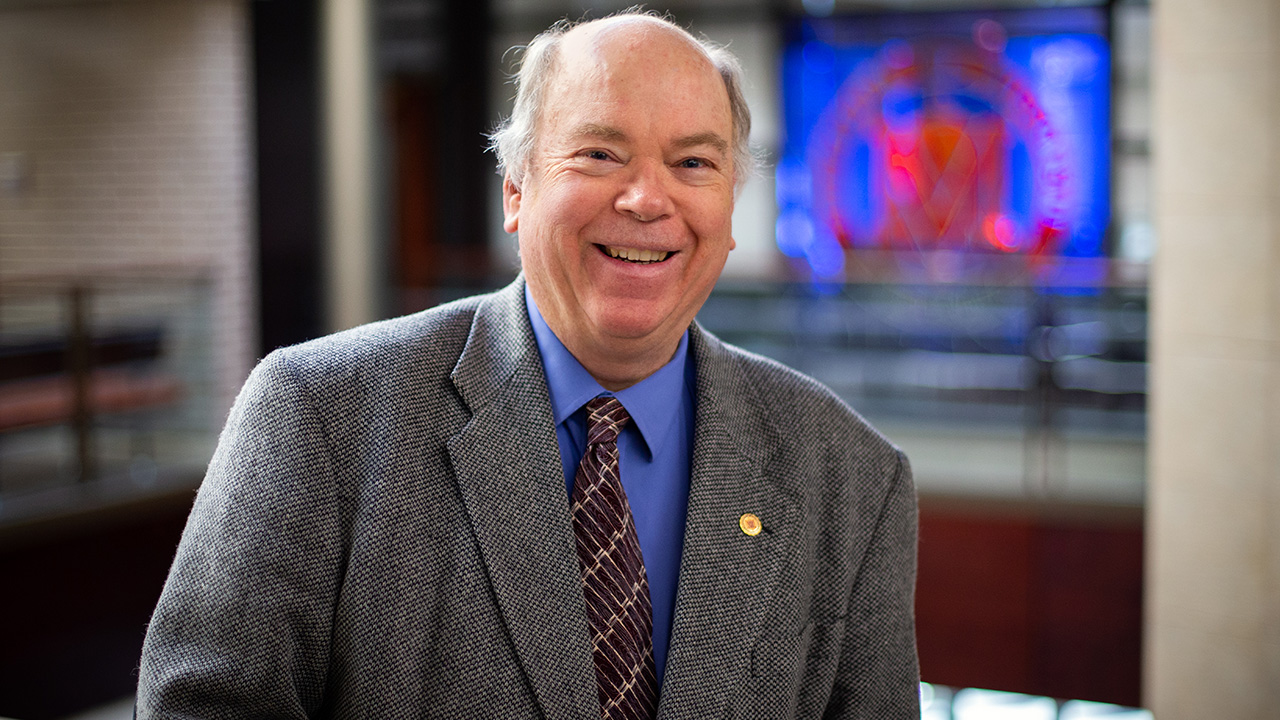 Learning from his students and watching them learn and grow are what Dr. Todd Stradford loves most about teaching. Stradford, an associate professor of geography at the University of Wisconsin-Platteville since August 1997, teaches courses in human geography, weather and climate and Asia.

Stradford grew up in a Navy family, the son of a naval captain. Being a member of a military family required frequent moves and exposure to unfamiliar cultures. Thanks to these early childhood experiences, he has always loved learning about other cultures and people and developed a taste for travel. He still has his first pair of Japanese chopsticks, which have a hand-painted baseball player on them.

Stradford earned a Bachelor of Science in geology at St. Lawrence University in upstate New York. Following graduation, he traveled, taking odd jobs from picking apples in Washington state to serving as a sommelier at the Williamsburg Inn in Virginia to picking oranges at a kibbutz in Israel. He then returned to school to pursue a Master of Science in geography at the University of Missouri in Columbia.

What drew you to the field of geography?

It was cartography, the construction of maps, that initially drew me to the field of geography. In geology, the part I liked best was the field work and putting the results on outcrop maps. At the time, it was all manual cartography, using pen and ink, Leroy letterers and limited rub-down. If we made one mistake, we had to start over. I think I made every map at least three times. I got fast through repetition, though.

What is your area of specialization or interest?

When I returned to school at the University of Missouri, I talked with the geologists and then headed to the geography department, because I had an interest in cartography. Luckily, the University of Missouri had a cartographer on board who was familiar with manual, photographic and digital cartography. I took all of his courses and learned about photographic/vacuum frame reproduction, which is still used by the United States Geological Survey, as well as the beginnings of mapping on computers. This continued through other instructors, where we had to write our own mapping programs, from reading digital input to drawing choropleths, analyzing the data and determining data loss due to classification. The computer aspects led into geographic information systems and digital image processing of satellite imagery.

While studying all of these techniques, a visiting professor from Oxford came to teach about his specialty, China. I took all of his courses, signed up for Chinese language courses and took a study tour of China. I had started working on a remotely-sensed base study of abandoned villages in the Gansu Corridor when the Tiananmen protests took place. All research visas were stopped, despite contacts within the Chinese Academy of Science, so I began a study using satellite imagery of Japan. The preliminary study didn’t work out, so it turned into a study using second derivative maps and lots of statistics to see where Japanese agriculture was headed.

Why is the study of geography important to a liberal arts education?

From my perspective, the study of geography is a chance to expose students who have grown up in an isolated country, both locally and nationally, to other cultures and values around the world. Most students may be surprised to learn that only 4.5 percent of the world is made up of Americans. The rest have different cultures and values that are just as valid as ours. If students realize they are part of something much larger, and most of it is not familiar, their tolerance of other cultures and viewpoints might increase.

How do you keep students fully engaged in the learning process?

The easiest way to keep students engaged in the learning process is to have them work with their hands, but most of geography is not hands-on unless you travel. A foreign study experience would stimulate many of them. Eastern liberal arts schools have required that each student get a passport their freshman year, as they are required to go abroad. The students I’ve taken abroad have become much more involved in the coursework.

Because of my familiarity with Japan, I took students to Japan for six weeks in the summers from 1997-2012. We took daily field trips to physical and cultural locations, such as Minamata, the site of mercury poisoning, and Mt. Aso, the world’s largest above ground volcanic caldera. While running the summer trip, I oversaw up to seven research projects at a time. These were all totally different, depending on the students’ backgrounds. Topics ran from linguistic studies to the effects of a new mall on the old commercial areas of a town, which won the undergraduate research project of the year at the University of Kentucky. During this time, I loved learning from the students, as they were always researching areas in which the instructor was not well-versed. I also organized and led a six-week field trip to Japan in conjunction with the Japanese Studies Program at the University of Kentucky from 1997-2012.

I still visit Japan. The last time, I drove around the island of Tsushima, the site of ancient wars with the Mongols and, in modern times, the defeat of the Russian Navy.

What do you enjoy doing when you are not teaching?

In junior high school, I began playing table tennis, only losing to the guy who took the New York State championship. As there was no local competition, I switched to tennis for half of high school and in college. While living in Japan, I took table tennis up again, playing at several clubs, and continued it for a short time upon return to the United States until, again, there was no one with whom to play.  I am now advisor for the Table Tennis Club on campus and play when I can at a couple of clubs in Dubuque.

I also used to be a whitewater kayak instructor and have run rivers in Asia and across North America. I began that when I was about seven years old, starting with the Potomac through Washington, D.C. and then down some rocky rivers in Glacier National Park. Runs have included the New River in West Virginia and the Colorado. I now paddle flat water, which is about all there is around here, and my Kevlar whitewater boat hangs in my garage, just storing the gear. I also grew up skiing and have skied in Europe, Asia and North America. Now, I last a few hours at one of the local slopes but go once or twice a week in winter.

To nominate someone for the Pioneer Spotlight, contact pr@uwplatt.edu.

Pioneers answer the call for help