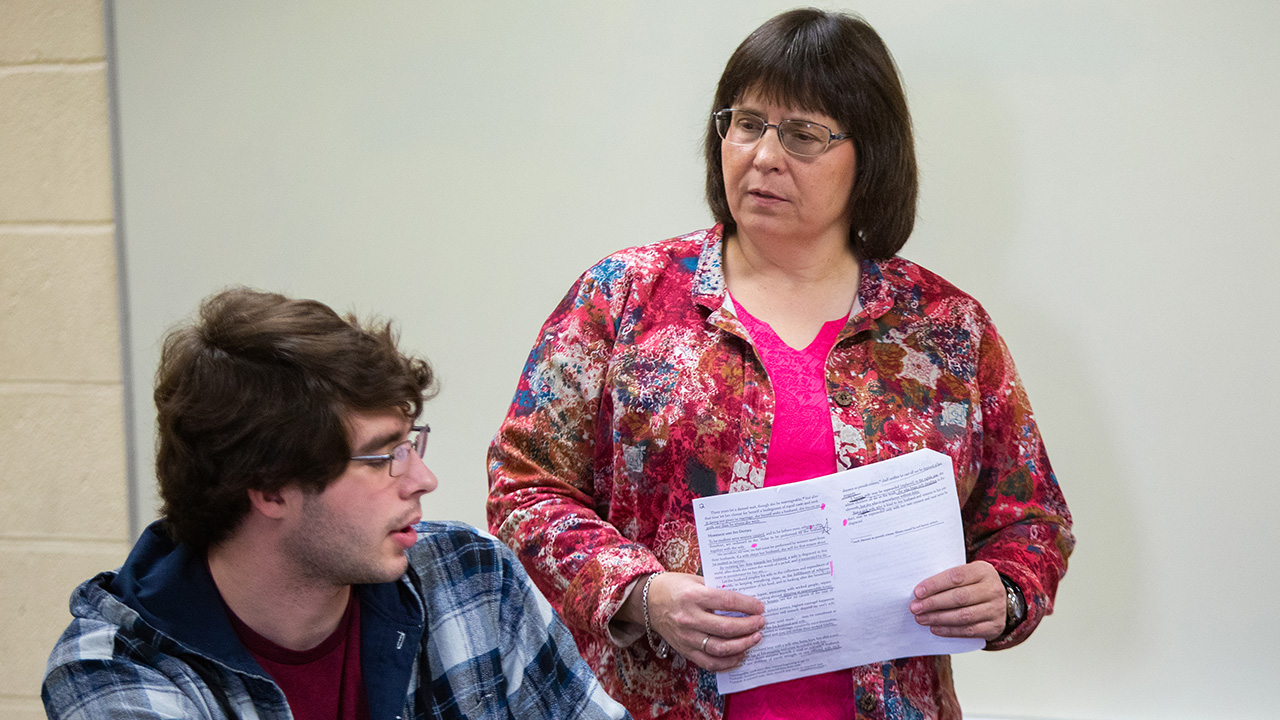 Sharing stories about events and individuals from ancient and medieval history that enable students to develop a better understanding of how and why the modern world has become what it is today is one of the things Dr. Nancy Turner enjoys most about teaching.

Turner, a professor of history at the University of Wisconsin-Platteville since fall 1996, teaches the first half of an introductory course in world civilizations as well as upper-level courses in medieval and renaissance Europe and the histories of European women, the modern Middle East, the British Isles and western science.

Turner was born on the East Coast, but grew up in Minnesota, Missouri and Iowa. She earned a bachelor’s degree in history and German from the University of Missouri-Columbia and a master’s and Ph.D. in medieval history from the University of Iowa. She has received two German Academic Exchange Service, or DAAD, grants from the German government that allowed her to spend one year conducting research in Heidelberg and three months carrying out research in Dortmund.

Her scholarly specializations include Christians’ attitudes toward non-Christians, particularly Jews, in the late Middle Ages; and the Scientific Revolution of the 16th and 17th centuries.

What do you enjoy most about teaching?

I love presenting students with stories about events and individuals from ancient and medieval history that (I hope) enable them to develop a better understanding of how and why the modern world has become what it is today. Along those lines, I enjoy helping students gain a better sense of the United States’ position within the 5,500-year history of human civilization by teaching them about the customs, laws, religious beliefs, gender relations and major turning points of past civilizations.

I think it’s fun to introduce students to some of the extremely sophisticated societies of the ancient and medieval world and tell them about the technology and mindsets these past societies invented that we continue to use today.

I also get a sense of pride from seeing students’ critical thinking skills improve due to the readings and papers I assign. Since history is primarily a written, evidence-based discipline, I assign papers in all my courses that require students to analyze written, non-fiction sources. So, I feel good about teaching students how to express themselves clearly, logically and systematically in these papers.

What drew you to your areas of specialization and how do they inform your teaching?

When I was growing up, my father was a fan of Shakespeare and Elizabethan England and had images of Shakespeare, Henry VIII and Queen Elizabeth I up on the walls throughout the house. When I was a child, I thought Shakespeare and Queen Elizabeth lived during the Middle Ages (even though they actually lived during the Early Modern Period), so I’ve been drawn to medieval history and culture since I was a kid. I was even more drawn to the Middle Ages once I noticed that medieval queens and noble women were allowed a relatively high level of influence and power over themselves and others when compared to elite women during the Early Modern and even Modern eras.

As a child and teenager, focusing on the Middle Ages allowed me to imagine living in a society in which women could be powerful and influential. When I teach about ancient and medieval civilizations, I always emphasize the kinds of jobs, even careers, that everyday women had – going back to pre-history – that allowed them to play a role in society beyond being a wife and mother.

Why are history courses so important to a liberal arts education?

History provides disciplines like political science, sociology, anthropology and economics, among others, with an enormous number of “case studies” going back thousands of years involving issues and events related to the focus of these disciplines. Studying the history of ancient, medieval and even modern societies can provide social scientists with examples of how human communities have responded to economic, cultural and technological changes over hundreds, if not thousands, of years.

For instance, in studying the past, we can examine civilizations that conquered foreign societies and learn from the ways the conquerors successfully dealt with the difficult tasks of incorporating new religions, absorbing refugees and dealing with new customs and languages. For subjects like philosophy and literature, the study of history provides the vital social context within which scholars and students can better understand the thinkers who created great works of literature and philosophy. And of course, within liberal arts courses, studying history helps us learn how many customs, beliefs, behaviors and sayings we commonly use today first originated.

What are three things you hope students take away from your classes?

I hope students take away the realization that there have been, and still are, many ways that human beings have created prosperous, stable, long-lasting and intellectually-sophisticated civilizations aside from the way the United States (or the western world in general) has created its civilization. I want students to know about the multitude of technological inventions and intellectual breakthroughs the modern western world has inherited from the ancient Chinese, Indian and Arab/Islamic civilizations, among others. It’s common for people to say that we can benefit from studying past societies because we can then avoid repeating their mistakes. I like to turn that concept on its head – I want students to learn from past civilizations’ successes.

I also hope students come away from my history courses understanding that the study of history is not about just noting and memorizing what happened in the past. I teach students that a true understanding of history involves being able to explain why an event or social movement occurred and then being able to explain the long-term impact of that event, movement or individual.

And finally, I hope students come away with the realization that because women make up half of the human population, if we want to, or expect to, understand a past civilization, we must always look at what women were doing in that civilization besides being wives and mothers as well as how women were viewed and treated by that civilization in general. Any examination of a past (or current) society that leaves out an investigation of half of that civilization’s population is not a complete history.

How do you keep students engaged in the learning process?

I keep students engaged in the learning process by telling them (what I hope are) fun, interesting and inspiring stories about events and people that really existed. I also constantly try to relate the events and concepts of the past to things that are going on in the present and to point out how past events – even ancient events – are still having an impact on us today.

I try to focus on past beliefs and customs that are intriguing or surprising to students to pique their interest. And rather than have students just read about ancient people in textbooks written by modern historians, I have the students read documents written by ancient Egyptians, ancient Greeks, ancient Romans, medieval theologians, etc. Reading documents written by ancient and medieval people can give students insight into the mentality and values of that time period that they can’t get from reading a modern textbook.

I hope students use the skills they develop in my courses – such as analyzing written works, thinking critically, forming and expressing their thoughts in a clear and logical way and understanding the peoples and places in the wider world around them – to establish careers that are meaningful to them. I hope the knowledge they’ve gained in my courses about the actions and achievements of human beings over the past several millennia expands their horizons and enriches their understanding of current societies around the world.

To nominate someone for the Pioneer Spotlight, email pr@uwplatt.edu.