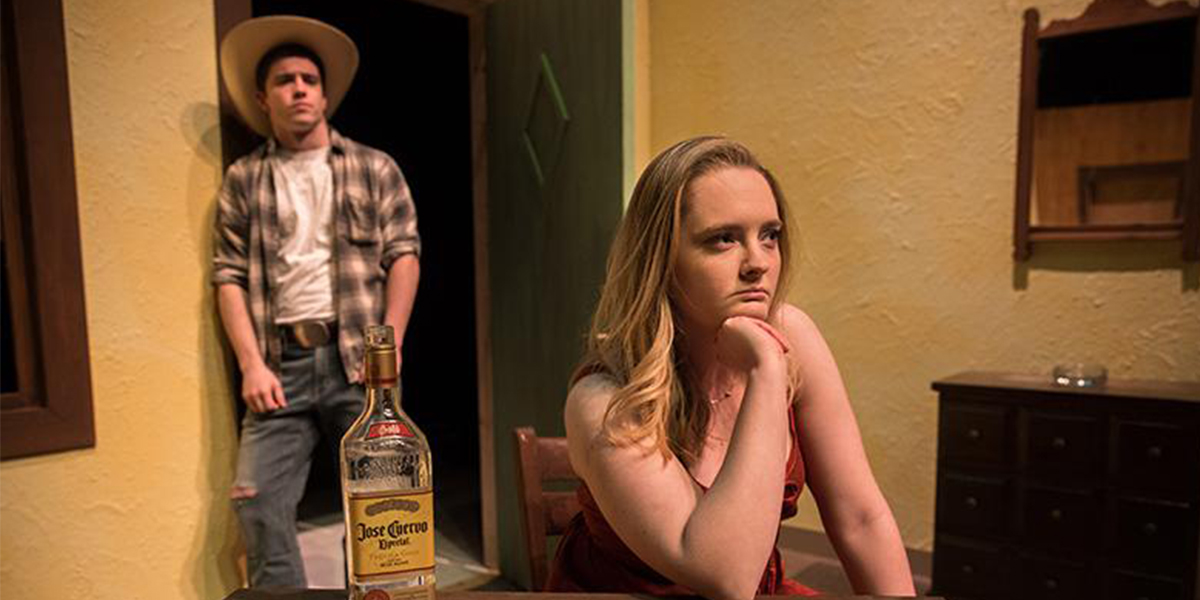 The Feb. 13 performance at 7:30 p.m. is also the Benefit Wednesday performance. All tickets for the benefit are $7, and the proceeds go to the Platteville Food Pantry and Pioneer Provisions, a free pantry/grocery service for students experiencing food insecurity.

A finalist for the 1984 Pulitzer Prize, the play won an Obie Award for Best Play. The play is a story of forbidden love between Eddie and May, who are connected by circumstances beyond their control and powerless to stay away from one another – even though they absolutely should. As the play opens, Eddie has found May in a worn-out motel room in the desert and is determined to get her back.

“While the two clearly love one another, despite their often angry words, they cannot and should not be together,” said Ann Dillon Farrelly, associate professor of theatre and the play’s director. “Add in a new man coming to pick up May for a date and the ghost of a terrible father, and you have the recipe for an explosive Shepard play. Shepard is influenced by the themes of Ancient Greek drama, but he is also known for exploring impossible situations involving dysfunctional families as a metaphor for the myth of the American West and the death of the American Dream.”

The play is recommended for mature audiences. “It’s a Shepard play, so it’s not timid,” said Farrelly. “It’s rough and raw and emotional – and it’s a wonderful vehicle and challenge for our talented actors and designers.”

The cast includes UW-Platteville students Logan Eigenberger as Eddie, Beth Wallace as May, Jon Hutson as the Old Man and Jason Hackbarth as Martin. Lillyana Frenz is the stage manager.

The production also includes a design team made up entirely of students, with scenic design by Samuel Klaas, costume design by Blair Schuler and lighting design by Zach Van Camp. The production will also be adjudicated by the Kennedy Center American College Theatre Festival.

“As we saw with both of our fall shows, this season features many student designers, which is very exciting,” said Farrelly. “Under the mentorship of our extraordinary theatre design faculty, Jeffrey Strange and Sarah Strange, these students are getting opportunities that are not often afforded students at the undergraduate level.”