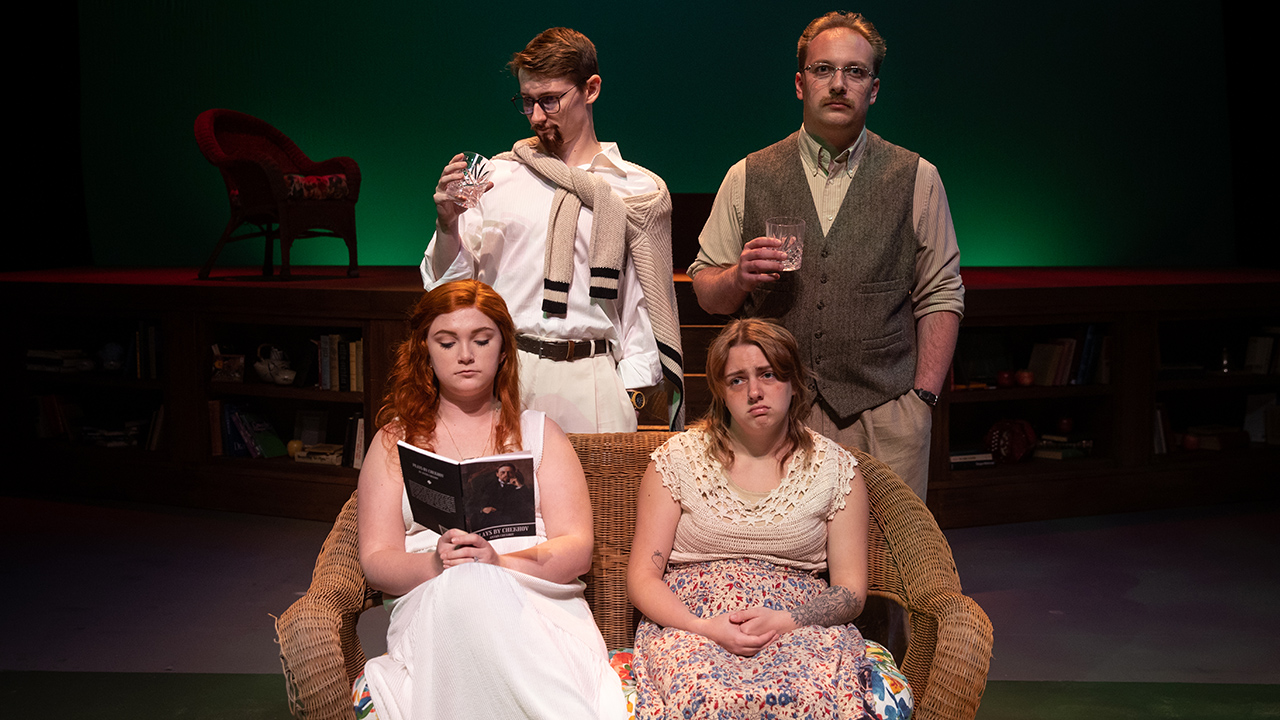 Pictured, from left to right, are Isabelle Sander and Katie Dionne (front row) and Jackson Hemming and Alex Bartel (back row).

The University of Wisconsin-Platteville Department of Performing and Visual Arts-Theatre and Pioneer Players will open their 2022-2023 season with Madison-native Aaron Posner’s “Life Sucks.” Performances are Oct. 5 at 11 a.m., Oct. 5-8 at 7:30 p.m. and Oct. 9 at 2 p.m. in the Center for the Arts Theatre. The performance on Oct. 5 at 7:30 p.m. is also the Benefit Wednesday show. All tickets for Benefit Wednesday are $7, and the proceeds go to the Platteville Food Pantry and Pioneer Provisions, a free pantry/grocery service on campus which all currently enrolled students experiencing food insecurity are eligible to utilize.

“Life Sucks” is an adaptation of Russian playwright Anton Chekhov’s “Uncle Vanya.”  According to Dr. Ann Dillon Farrelly, professor of theatre and director, “In Posner’s own words, it is ‘sort of adapted’ from Chekhov. While it retains many of the elements of the 1899 original, it brings an often-hilarious and contemporary spin to the classic play. The title alone should alert audiences to the fact that it is something different.”

First produced in 2015, “Life Sucks” centers around perpetually-angsty Vanya and his friends and family. Throughout the course of the play, the characters struggle with life’s most complicated questions. According to Farrelly, “As with Posner’s other Chekhov adaptations, he is exploring what happens when you take the subtextual angst of a Chekov character and make it the text. In this play, the characters say out loud, to themselves, each other, and the audience, what is really going on in their minds. It is a smart, funny, and poignant exploration of what it means to be human, and, as the characters tell us, an exploration of love, longing, and loss.”

“It is always exciting to have student designers working alongside the faculty. As always, our students are doing some amazing work. We ask a lot of them, and they always go above and beyond in their commitment to every project,” said Farrelly.

Because of language and adult situations, this production is recommended for mature audiences. Plans are subject to change based on health and safety measures that may be in place at the time of the event. Tickets for the production are $15 for general admission and $7 for students (price includes $2 box office transaction fee). For tickets, contact the University Box Office at 608-342-1298 or buy them online at tickets.uwplatt.edu.