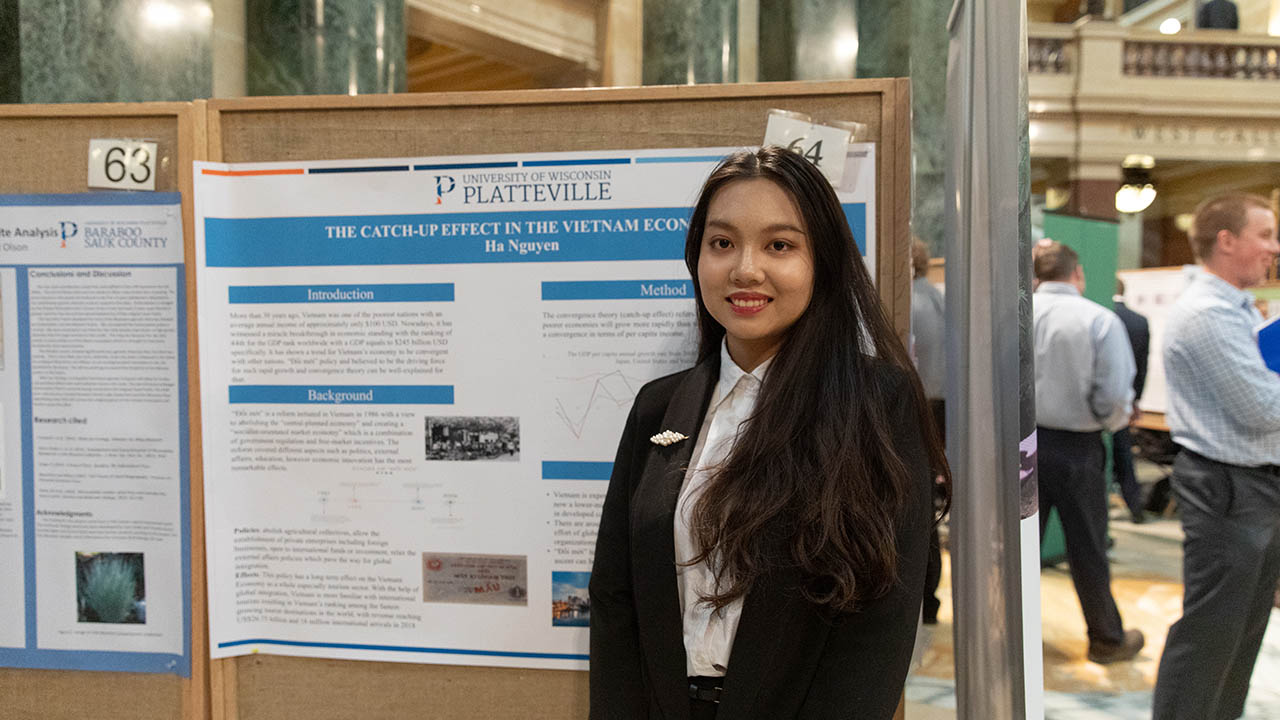 Vietnam, Ha Nguyen’s home before enrolling at the University of Wisconsin-Platteville Richland, has undergone big structural economic change since the mid-1980s, when most market restrictions were lifted, and “people could start to buy and sell with the amount of what they wanted, not being controlled by the government,” said Nguyen.  She has performed a review of the Vietnamese government’s major economic policy changes over the last 30 years, and will share her research with legislators, state leaders, alumni and the public at the 17th annual Research in the Rotunda event in the state capitol in Madison, Wisconsin on Wednesday, March 11, 2020.

In 1986, Vietnam initiated a transition from a centrally planned economy, to what was termed a “socialist-oriented market economy.”  This innovation campaign, named the Doi Moi, changed the structure of the nation’s economy and markets, and spurred significant growth, according to Nguyen’s review.  The Gross Domestic Product of Vietnam nearly quadrupled between 1985-2005, which has led to significant economic opportunities all across Vietnam.  Other indicators show significant growth as well.

Among Nguyen’s observations is one that mirrors her own family’s experience – that the economic growth in Vietnam has concentrated in more urban, already-developed parts of the country, rather than making as significant changes to more rural areas. Her own parents came from a smaller community, but moved to the capitol city of Hanoi to enjoy more opportunities, and access to better schools, hospitals, and other services in the bustling city of more than 8 million people.  “Young people come to the large areas to attend the university, and try to get work there after graduation, since there are way more opportunities in big cities,” Nguyen said.

She also thinks that tourism, both from outside and inside Vietnam, has fueled growth, although some places certainly have built-in advantages.  “A lot of cities that have a good location, like with the beach, are pushing tourism … but that doesn’t grow as fast as the opportunities in the big cities yet,” Nguyen said. The Bilateral Trade Agreement with the United States, which has allowed for great expansion of exports, and easing of international travel to and from Vietnam has been key.

Nguyen said she thinks that these policy changes have been good. “Vietnam is still a developing country, and in the past we had a lot of restrictions and barriers for international trade. But as time has passed, we have integrated with globalization, and that’s how we are having rapid economic growth,” she said.

For more information about the Research in the Rotunda event, visit www.wisconsin.edu/research-in-the-rotunda/.