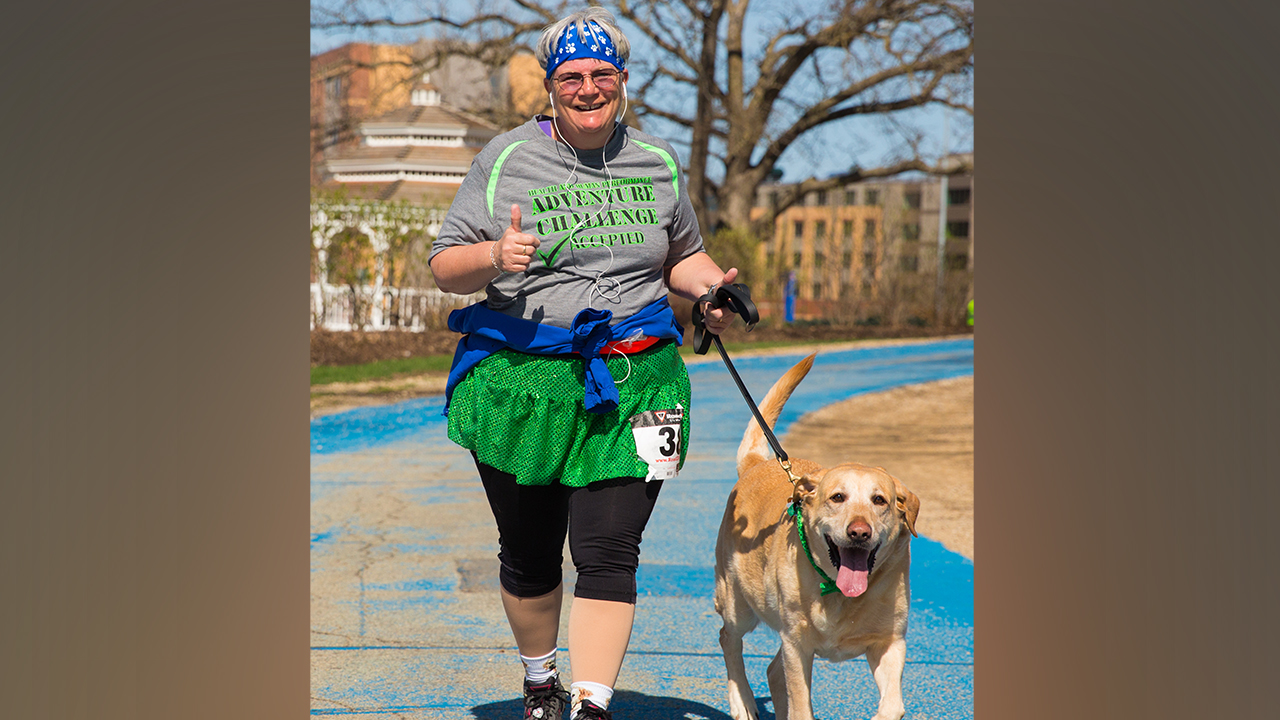 Nancy Ware was one of the most visible citizens in Platteville, whether at sporting competitions, at the swimming pool or taking her dog out for a walk. It was only fitting that in her will, she ensured her impact would live on in the city for years to come.

Ware, who passed away Nov. 26, 2019 at age 61, set up six different scholarships to help UW-Platteville students in need.

“She used to tell me, ‘we need education, education and education,’” close friend Jill Ingersoll said. “I didn’t understand until she brought out these scholarships and showed me what she was doing. All I could say was, ‘Girl you are amazing!’”

A Platteville native, Ware worked at Lands’ End for more than 30 years. Because education was so important to her, she earned her degree as a non-traditional student from UW-Platteville in 1993, majoring in business administration.

“Nancy was the epitome of what it means to be a Pioneer: hard-working, humble and generous,” said Josh Boots, assistant vice chancellor for Development and Alumni Engagement. “She loved helping others, and with her gift, she will continue to help future Pioneers meet their educational goals.”

In setting up her scholarships, Ware recalled a story she had read about a young girl who received a $10 bill as a gift. Instead of spending it on herself, she purchased a coat for a boy who couldn’t afford one and gave it to him as a Christmas present.

“Live your life serving others, and rewards you receive, will be beyond any of your wildest expectations,” she wrote.

Childhood friend Mary Place, who grew up three houses away from Ware, said the pattern of helping others continued throughout her life. “She was one of the most giving persons I ever knew,” she said. “She would give you the shirt off her back if you needed it.”

“Nancy was an extremely giving person. She would deprive herself in order to help somebody else,” Ingersoll said. “When I was looking after her towards the end of her life, I noticed that her toothbrush was very worn. I said, ‘Nancy, why are you using that old toothbrush?’ and she said, ‘Instead of buying a new toothbrush, I can give the money to someone who needs it.’ I have so much admiration for her and her giving ways.”

Ware enjoyed the small gestures, such as getting someone a treat at the swimming pool, and wanted the larger gestures kept anonymous.

“Around the city, she was known as Lifeguard Nancy,” Place said. “She was at the pool every weekend and as much as she could during the week. She would make sure all the rules at the pool were being followed.”

Later in life, she took up photography as a hobby and even turned that venture into a way to give to the city and the university.  “At games, she took thousands and thousands of pictures, and she would give those pictures or post them for people and never, ever asked for anything in return,’ Ingersoll said. “That was just the way Nancy was, always giving.”

Ware often took pictures at Pioneer athletic events and befriended many of the students, giving them a friendly face away from home.

“Since she didn't have any kids of her own, Nancy, being Nancy, was going to help other people’s kids,” Place said.

With her scholarships, Ware will continue to help other people’s children.

“She promoted education and believed everybody should be given the opportunity towards one,” Ingersoll said.  “I don’t think people realize how much she did in the community and how much she gave.”