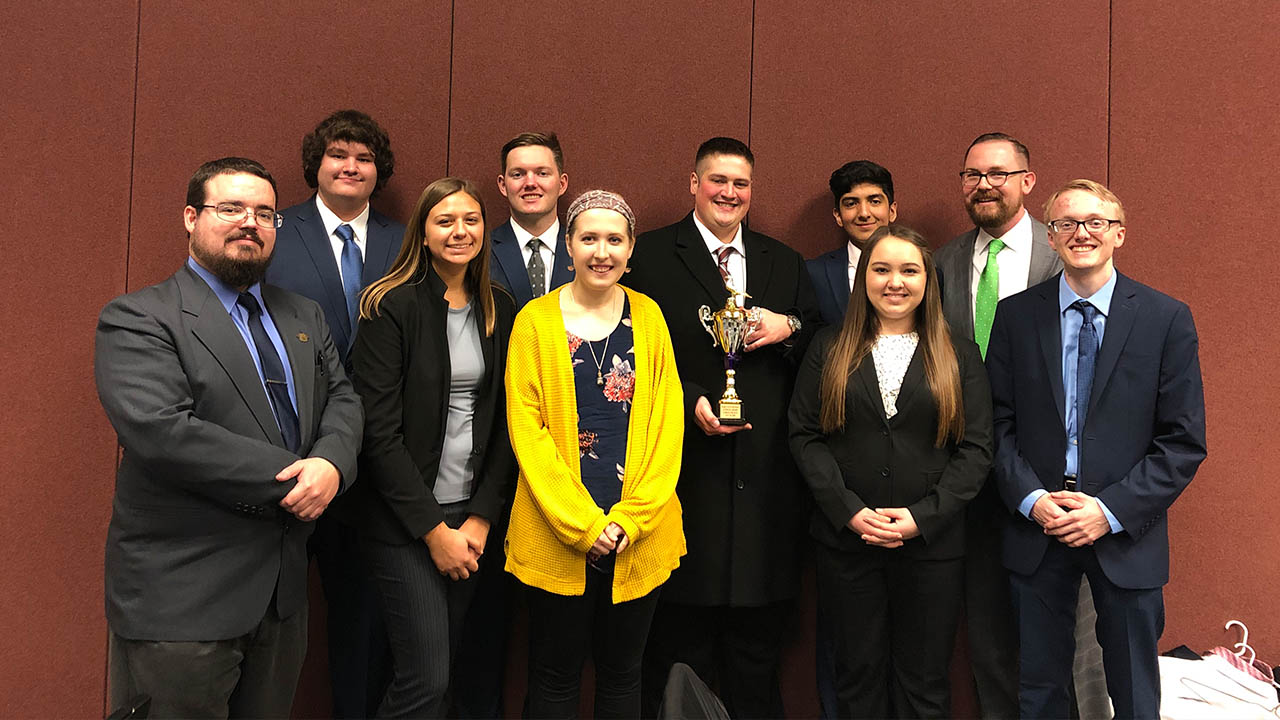 The University of Wisconsin-Platteville Mock Trial Team won the Mary Lynn Neuhaus Civility Award at the 32nd National Mock Trial Invitational held recently at Loras College in Dubuque, Iowa. Recipients of the award, dedicated to the former head coach of Loras College Mock Trial, are chosen by their peers as the team that most exemplifies civility, sportsmanship and courtesy.

Forty-four teams from private and public universities from throughout the Midwest competed in the two-day tournament of trial simulations. The competition provided students with hands-on experience in trial procedure, the rules of evidence and the planning of trial strategy. It also enabled them to hone their critical thinking, debate, analytic and public speaking skills.

All teams in the competition were given a 150+ page case problem involving an alleged homicide in the fictional state of Midlands. Over the weekend, teams competed in four three-hour rounds, with each side alternating as prosecution or defense. In the competition, each student served as an attorney, witness, or both, for the case. All student-attorneys had the opportunity to complete a direct examination of their own witnesses as well as a cross examination of the other team’s witnesses.

“As the coach of this team, I could not be prouder,” said Kyle Reiman, J.D., lecturer of criminal justice at UW-Platteville and a criminal defense attorney. “All 44 teams ranked the teams they faced based on civility, fair play, friendliness, good sportsmanship, professionalism, etc. One team commented that we were the friendliest team they had ever faced. In another comment, during a round, a member of the opposing team was struggling to find something and one of our student-attorneys leaned over and told them which line to find the information on. They could not believe the spirit of sportsmanship that our students displayed.”

Winning the award greatly impacted the students too.

“We went into the tournament knowing we were the underdogs,” said Sam Tooley, a senior industrial engineering major from Madison, Wisconsin, and co-captain of the Mock Trial Team. “This was our first tournament, but we had two goals. First, we wanted to learn everything we could from the judges and more experienced teams. Second, we wanted to forge positive relationships with our competitors, in the hopes that we could practice against and with them in the future. The award we received reflects our extraordinary success in achieving our second goal, and I cannot wait to show all we have learned when we go to the regional competition in two weeks.”

“When I heard UW-Platteville’s name called, I jumped out of my seat,” said Brianna Vaughn, a senior forensic investigation major from Kenosha, Wisconsin, and co-captain of the Mock Trial Team. “I had tears in my eyes, as we weren’t expecting to win any awards at our first tournament. Hearing that we were one of the nicest teams they had ever met was a huge confidence booster; that we weren’t just the new kids on the block. I really enjoyed the nature of the competition. Everyone was really nice to us and helped us through our first competition.”

Vaughn said the learning experience helped prepare her for her future career. “I am thinking about becoming a prosecuting attorney, so it is awesome to be able to do something like this and have Kyle Reimann, a defense lawyer, as our coach,” she said. “This experience is giving me an opportunity to engage in public speaking, memorization, and learning to think on my feet with responses to objections or making the objections.”

“I wasn’t expecting to win the trophy,” said Amber Kelly, a senior forensic investigation major from Baileys Harbor, Wisconsin, and co-captain of the Mock Trial Team. “We got to the point in the ceremony where I wasn’t expecting our team to win any awards. After we won, I was extremely proud of our team for being kind and considerate to other teams who we were competing against. I think it shows a lot for our school as a whole to be seen as friendly, nice and fair to play against.”

Reimann agreed, and noted that nothing is more important than character.

“To win an award for character and how we treated others is the ultimate compliment and testament to our students,” he said. “Sometimes people confuse kindness with weakness, but you will never go wrong treating each person like they have value and matter. Our world could use more people like these students. To win a trophy (and the second largest one) at the first tournament we competed in is a tremendous testament to the hard work and quality of our students who were competing.”