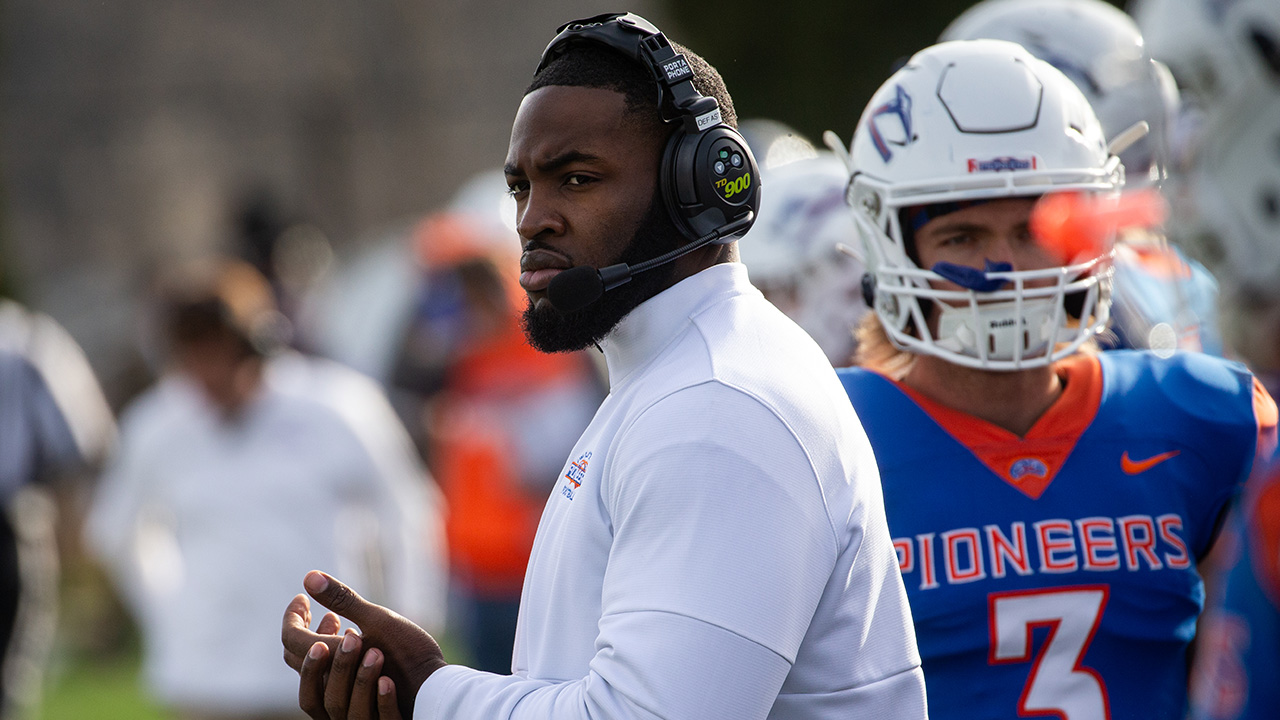 In the summer of 2015, Donovan Nathaniel made the two- and half-hour drive from Milwaukee, Wisconsin to the University of Wisconsin-Platteville to embark on his academic and athletic career for the Pioneers.

“The football team led me to UW-Platteville. Once I came on my visit and met the staff, I knew this would be my home for the next four to five years. I am a big family guy, so only being two- and half-hours from home served as a plus,” Nathaniel said.

Nathaniel was a member of the football team all four years of his undergraduate studies. “As a student-athlete, having the opportunity to share in many special moments with a team made up of guys from different backgrounds was remarkable,” Nathaniel said. “You always remember the thrill of the wins and making the NCAA playoffs, but the bond you form with your teammates is unexplainable. You take a kid from Milwaukee and another kid from rural Iowa, and because of football you become close. To this day I see guys I played with and it’s as if time has gone nowhere.”

Nathaniel served as team captain for the 2018 season, was a member of the WIAC All-Sportsmanship team and was awarded the prestigious George Chryst Award as a senior. Nathaniel also excelled in the classroom being named to the 2019 National Football Foundation & College Hall of Fame Hampshire Honor Society, and was WIAC All-Academic while majoring in Health and Human Performance.

Coming from the larger city of Milwaukee to rural southwest Wisconsin can be nerve racking as a young student-athlete, but Nathaniel said “as a student, football was my family, there is not a single experience that I have had here at UW-Platteville that didn’t involve another member of the football team. Having those guys made the transition from the city to rural Wisconsin a lot easier for me.”

Now, five years after Nathaniel made the initial trip he has embarked on a new career at UW-Platteville as an assistant football coach.

“Coaching was never a thought for me, I initially planned on continuing my playing career in Germany,” Nathaniel said.  But after the 2018 season, the women’s basketball team asked him to join as a student assistant while finishing his degree. “Making the transition to basketball was different, the number of members on the team, daily and weekly operations and even coaching style differ from what I was use to.  But the transition was not that hard as basketball was my first love, I enjoyed working with the players and coaching staff on that team.”

After finishing off the year with the women’s basketball team, Interim Athletic Director and Head Football Coach Mike Emendorfer offered him a job on his staff coaching the defensive line.  “Donovan was highly organized and engaged well with the student athletes on the women’s basketball team. We knew those skills would transfer to our program as he is knowledgeable, and his football IQ was and is strong,” Emendorfer said.

Nathaniel figured if he wasn’t playing football post-graduation, he would be back in Milwaukee working on a master’s degree. “When I received the call from Coach Emendorfer about the coaching vacancy, it was a no brainer,” Nathaniel said. “I bleed blue and orange, I wanted to continue to be part of a program striving to bring that WIAC championship back to UW-Platteville.”

The transition from player to coach is always difficult, it becomes even more difficult coaching players who were teammates with just over a year ago.

“Donovan is handling the transition well, it is always hard for former players to make that jump, as they always think they understand coaching demands, but those first weeks are tough on them,” Emendorfer said. “Then as they begin coaching and working with our staff, the transition from friend and peer to coach and athlete begins to happen. Donovan has handled this as well as any young coach I have had.”

“Transition is still something I currently go through every day. The hardest part is creating that separation with guys I know on a more personal level,” Nathaniel says. “Being in a leadership type role as captain in 2018 helped the transition.  The defensive line group, which I coach, guys I played alongside for two years, have helped with the transition as well by being respectful and they are a fun group to coach.”

Nathaniel has learned that coaching can be very time-consuming, but he felt it was important to  volunteer on the Minority Recruitment Council (MRC) where its goal is to help retain current minority student population, while also increasing it simultaneously. He also helps during the summers helping with the Pre-College camps that the University offers for underrepresented communities.

With Nathaniel’s connections to his hometown of Milwaukee, the Milwaukee area and parts of Chicago serve as his main recruiting territory.  He will take the knowledge he learned last year while helping recruit the Des Moines and central Iowa area to his new territories. “As a Milwaukee native and minority on this campus, I find it of great importance to recruit in areas that may help bring about more diversity to our program and campus. As a high school student, I know I couldn’t have pointed on a map and told you where Platteville was,” Nathaniel said. “Hopefully through my recruiting efforts with the football team and volunteering with MRC, UW-Platteville becomes a name that is recognized in those areas."

Five years after Nathaniel found Platteville on a map, he will be out recruiting for his alma mater. “I am so excited to get on the road and start recruiting,” Nathaniel said. “The campus has so much to offer; I bleed the colors; I love everything about UW-Platteville.  It truly is a great day to be a Pioneer.”