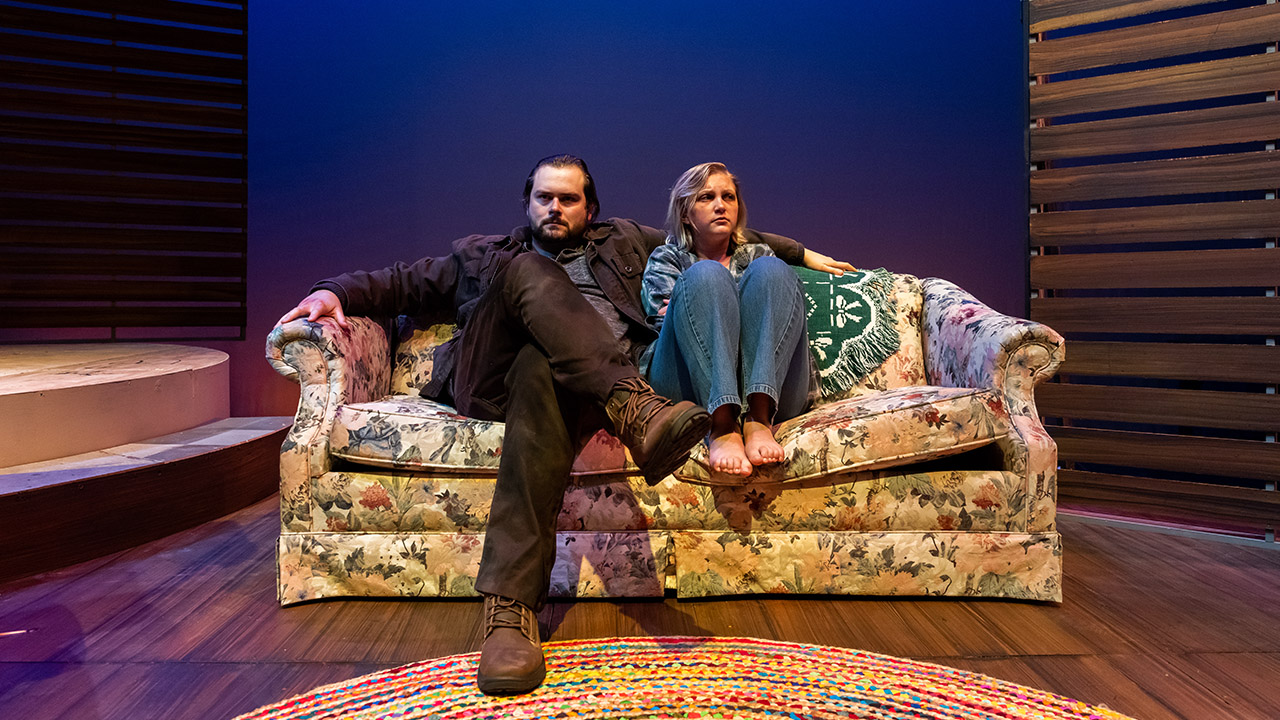 Pictured (left to right) are Jon Hutson as Jake and Isabelle Sander as Beth.

Live theatre performances return to the Center for the Arts as the University of Wisconsin-Platteville’s Department of Performing and Visual Arts-Theatre and Pioneer Players open their 2021-2022 season with the classic Sam Shepard play, “A Lie of the Mind.” Performances are Oct. 13 at 11 a.m., Oct. 13-16 at 7:30 p.m., and Oct. 17 at 2 p.m. in the Center for the Arts Theatre. The performance on Oct. 13 at 7:30 p.m. is also the Benefit Wednesday show. All tickets for Benefit Wednesday are $7, and the proceeds go to the Platteville Food Pantry and Family Advocates, an organization that provides prevention and intervention services to victims and survivors of domestic, sexual, child, and elder abuse in Grant, Iowa and Lafayette Counties.

First staged in 1985, the play follows the story of two families, connected by marriage, and reeling from the aftermath of a horrific incident of spousal abuse.  According to Ann Dillon Farrelly, professor of theatre and director of the production, “As usual, Sam Shepard takes an unflinching look at the dysfunction and destruction of the American family. Using elements of Greek theatre as well as Theatre of the Absurd, Shepard shows how the lies we tell ourselves are often the most devastating. Clearly these two families are caught in a cycle of violence and abuse, one that has consequences that reverberate through the generations. Shepard is always interested in how the past both haunts and informs the present and future.”

“Of course, we are thrilled to be back performing live to a full capacity audience,” said Farrelly. “The last year and a half were challenging for the performing arts, but we carried on. And while many challenges remain with a pandemic that is not yet over, we are happy to be back to something a little closer to normal.”

“It is always exciting to have student designers working alongside the faculty. They have done some incredible work, as have all of our students. We ask a lot of them, and they always go above and beyond in their commitment to every project,” said Farrelly. “We hope you will join us once again for some live theatre!”

Face coverings are required in all university buildings. Plans are subject to change based on health and safety measures that may be in place at the time of the event. The 100% fully-vaccinated cast will be performing without masks. Tickets for the production are $15 for general admission and $7 for students (price includes $2 box office transaction fee). For tickets, contact the University Box Office at 608-342-1298 or buy them online at tickets.uwplatt.edu.

New director looks to reinvigorate orchestral music in the community