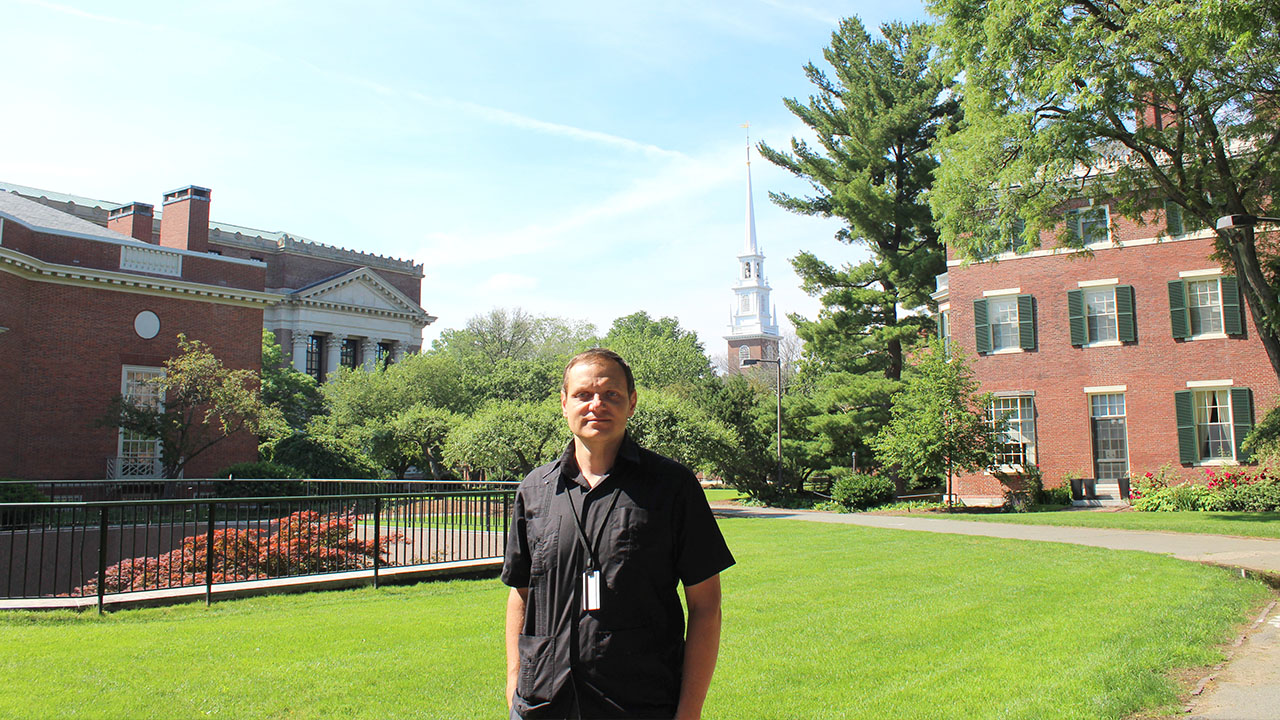 Dr. Andrey V. Ivanov in front of a general view of Houghton Library, part of Widener Library and Memorial Chapel in Harvard Yard. 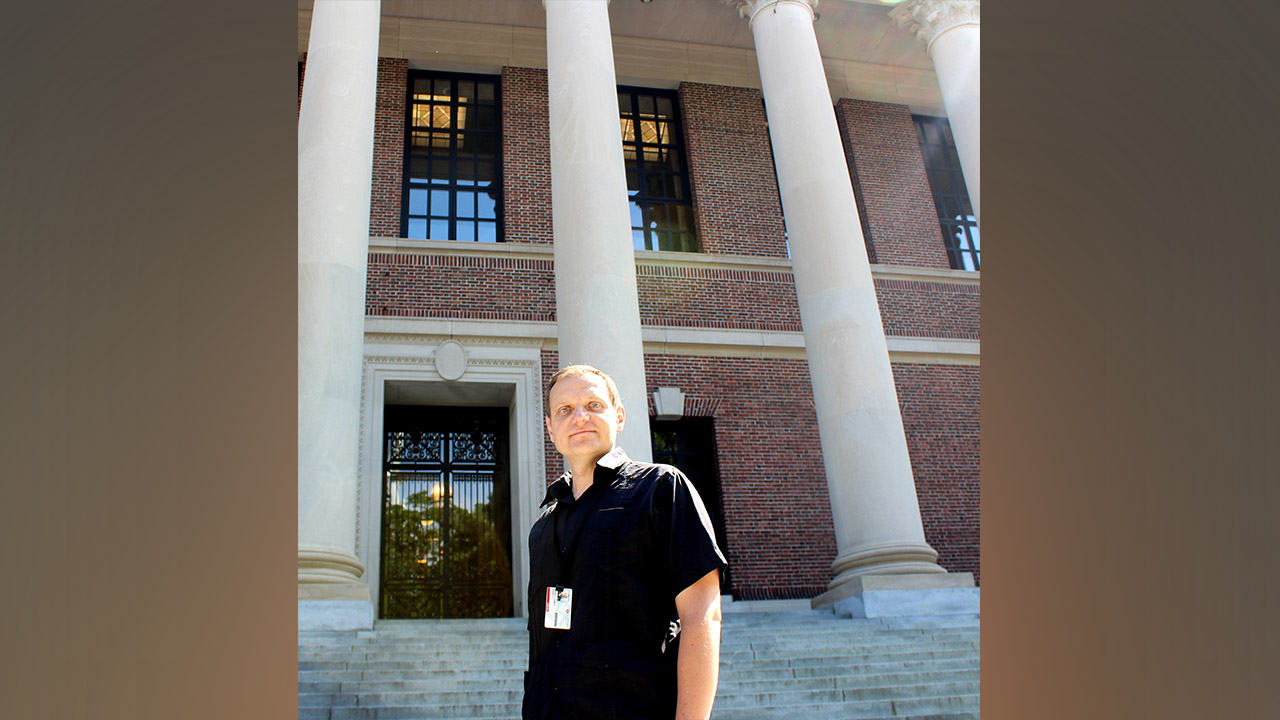 This summer, Dr. Andrey V. Ivanov, assistant professor of history at the University of Wisconsin-Platteville, was one of the recipients of the esteemed Houghton Library Visiting Fellowship at Harvard University in Cambridge, Massachusetts.

Each year, the fellowship brings scholars from around the world to Harvard’s Houghton Library to study primary sources, rare and unique collections in subjects as diverse as Egyptian papyri; the first published volumes of Homer; Leon Trotsky archives; the papers of Margaret Fuller, John Keats, James Joyce, T.S. Eliot, Gore Vidal; as well as a rich collection of Emily Dickinson’s original works and memorabilia, including her furniture. The library also is a world-class repository of material relating to Russian imperial history, including of the age of Catherine the Great (reigned 1762-1796), the period when Russia experienced Enlightenment and modernization, as well as empire-building expansion that stretched the country from Alaska to Poland.

The fellowship funded Ivanov’s stay at Harvard University from late May through the month of June, allowing him to engage in full-time research and writing that advanced the chapters of his book manuscript covering the impact of the European Enlightenment in Russia and the reign of Catherine II. His book, titled “A Spiritual Revolution: The Impact of the Reformation and Enlightenment in Orthodox Russia 1700-1836,” is forthcoming with the University of Wisconsin Press.

“The fellowship provided me with access to primary source materials that are very unique not only in their provenance, but also in their depth, breadth and specificity,” said Ivanov. “The life of Catherine is a very popular bibliographical subject, but what I was looking for were the biographies of Empress Catherine written during her lifetime, not after her death. Contemporaneous biographies of a leader often offer a different perspective on a leader’s profile than the posthumous ones. I was surprised to find numerous materials that met this criterion, including foreign biographies of the empress and her lovers, Russian odes and poems, Orthodox liturgies, letters, memoirs and the Russo-Turkish War accounts.”

“Through our Visiting Fellowship program, we support scholars at all stages of their careers and from around the globe in pursuing projects that require in-depth research on the library’s holdings,” said Anne-Marie Eze, director of Scholarly and Public Programs at Houghton Library. “Dr. Ivanov’s four-week residency at the library was productive, and we look forward to learning more about the historical context of the collections he studied here in his upcoming book.”

Ivanov noted that in addition to a very fruitful and very busy period of research and discovery, what also made his stay so memorable was engaging interaction with scholars from around the world that often started at Houghton’s Friday fellows’ coffee hour and continued throughout the following weeks.

“I am thankful to the generous funding of Harvard’s Houghton Visiting Fellowship (Bate/Bryant/ASECS Fund) for making the stay in Cambridge, Massachusetts, possible during part of the summer,” said Ivanov. “My gratitude also goes out to my inspiring colleagues in UW-Platteville’s Department of History, the College of Liberal Arts and Education and Office for Research and Sponsored Programs for their support, encouragement and assistance.”

Ivanov, who has taught at UW-Platteville since fall 2014, received his Ph.D. from Yale University in 2012 and has held visiting faculty and research fellowship appointments at Boston College, UW-Madison and the University of Notre Dame.