Gift to the Wright Center to enhance experience for non-traditional, veteran students 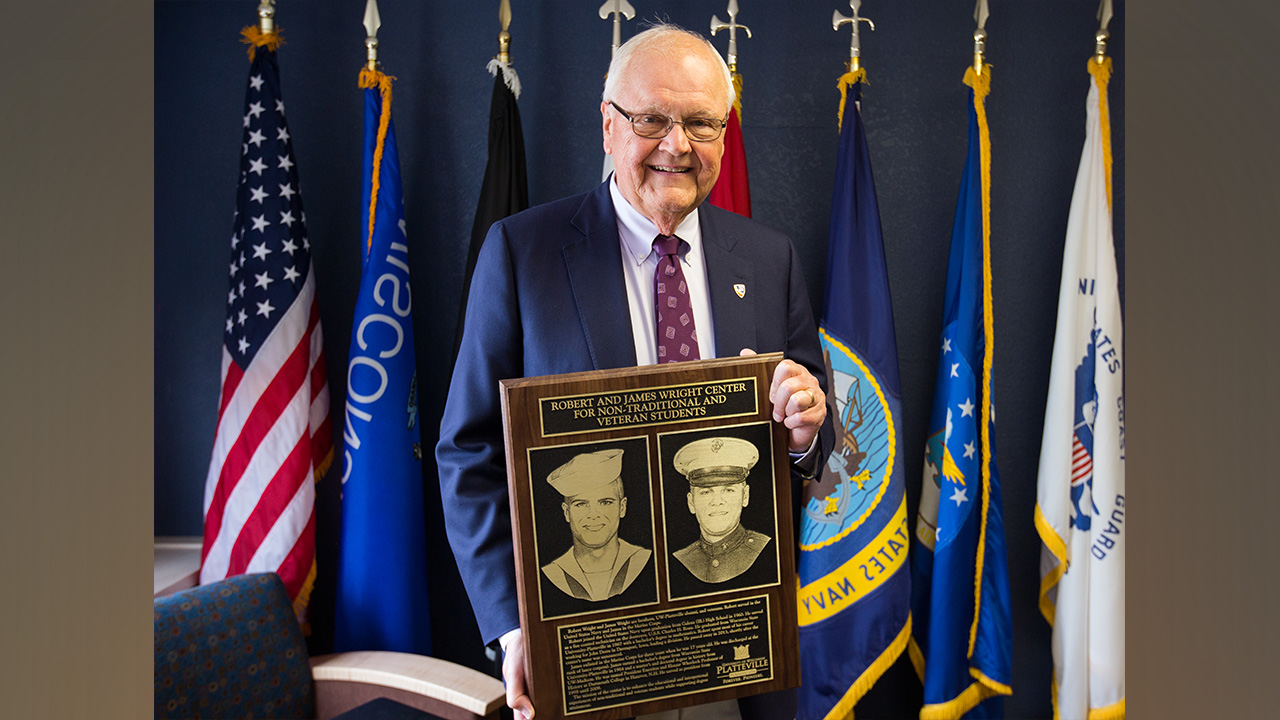 A recent $143,000 gift from the family of Robert “Bob” and James Wright will enhance opportunities offered at the University of Wisconsin-Platteville’s Wright Center for Non-Traditional and Veteran Students. The center, which opened in 2014, was named for the brothers after James raised a significant gift for the center. The Wright Center provides support and resources to veteran and non-traditional students, helping them feel more connected to campus and achieve their educational goals.

“Bob and I were both very grateful to UW-Platteville,” said James. “We were veterans and first-generation college graduates.”

The Wrights were graduates of Galena (Illinois) High School, James in 1957 and Robert in 1960. Robert joined the United States Navy upon graduation from high school. He served as a fire control technician on the destroyer, U.S.S. Charles H. Roan. He graduated from what was then called Wisconsin State University-Platteville in 1967 with a degree in mathematics, and later worked as an executive at John Deere. Robert passed away in 2013, shortly after the center’s name was announced.

James enlisted in the Marine Corps for three years when he was 17 years old. He was discharged at the rank of lance corporal. James earned a bachelor’s degree from Wisconsin State University-Platteville in 1964 and a master’s and doctoral degree in history from UW-Madison. He served as a professor of history and eventually president of Dartmouth College.

The Wright family has a long tradition of attending UW-Platteville. “Our dad went to the old Normal School for part of a semester during the Depression but had to drop out due to not having the money to continue,” said James. “Two of his sisters went to the special training program in Platteville for rural school teachers. We had two uncles on our mother’s side who went there as veterans after World War II, and we had cousins who also graduated from the school. It is good to be able to help the current generation of veterans and non-traditional students.”

The recent gift will be transformative in helping the Wright Center increase programming and support to improve the experiences and inclusion of non-traditional and veteran students at UW-Platteville.

"The Wright Center is very grateful for this gift, as it will allow us to continue serving students through programs that create awareness of, and solutions for the unique challenges of the veteran and non-traditional student populations at UW-Platteville,” said Greg Tremelling, coordinator of the Wright Center. “It will also allow us to provide access to resources that may help students pay for their education, as well as allow students opportunities for experiences that build on their educational outcomes and promote academic accomplishment."

The Wright family’s support also contributes to scholarships for non-traditional and veteran students.

“The Wright Family exemplifies the heart of what giving can accomplish,” said Sandie Brick-Margelofsky, senior development officer at UW-Platteville. “Their support of the students at UW-Platteville is truly life changing for our veterans and non-traditional students.”

The Wright Center is located in 322 Royce Hall.