Engels accepted into doctoral program at University of Colorado-Boulder 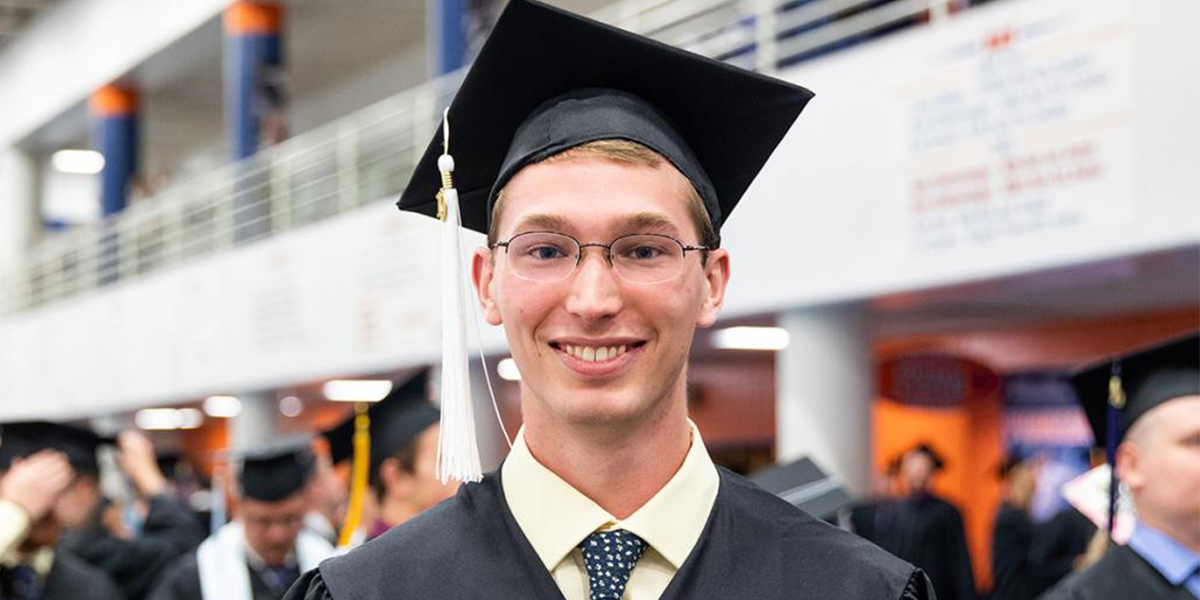 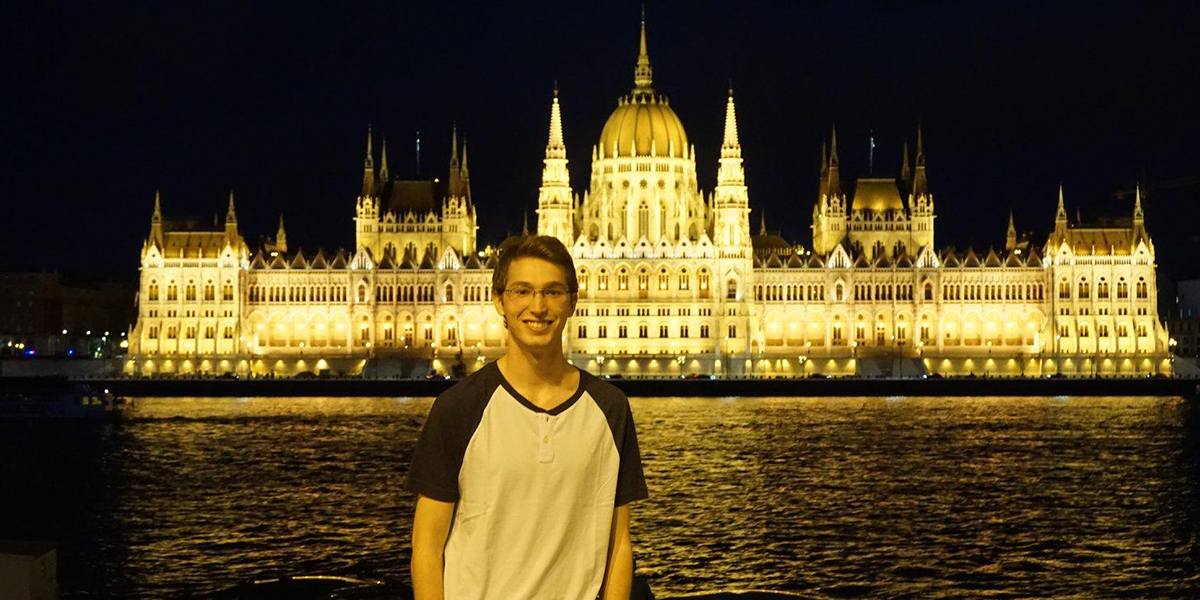 As Kyle Engels walked across the stage at the University of Wisconsin-Platteville’s commencement ceremony on May 11, he felt a mixture of emotions, including happiness, pride and excitement.

Happiness, because after five years of intensive, challenging coursework at UW-Platteville, his hard work and dedication had paid off – he had earned a Bachelor of Science in a field he was passionate about, political science.

Pride, because he was the first member of his family to graduate from college.

And excitement, because he had recently been accepted into a doctoral program at the University of Colorado-Boulder and was confident that his education at UW-Platteville had fully prepared him for the challenge.

“Kyle is a rare student that exemplifies the academic spirit,” said Dr. Shan Sappleton, assistant professor of political science at UW-Platteville. “He exhibits genuine curiosity about the world around him and generally seeks knowledge above grades in the purposive pursuit of his academic goals. He has a keen analytical mind, and tends to approach issues and questions with great thought and careful deliberation.”

As he was growing up, Engels, a Port Washington, Wisconsin native, knew that he wanted to further his education after high school. He wasn’t sure what area he wanted to pursue, but he thought he would likely attend a nearby community college or technical school.

“As I thought about my future, I was very cautious,” said Engels. “I didn’t consider going to a four-year college. No one in my family had gone to college, so there was no one to tell me what college was like.”

Engels and his mother visited several universities, including UW-Platteville.

“When we came to UW-Platteville, it was a quiet tour day,” he said. “We took our time and wandered around campus, just looking at everything, taking everything in. I remember the comfortable feeling I had. And I remember the moment when I looked at my mom and said, ‘This just feels right.’”

From the moment Engels began his coursework at UW-Platteville, he felt comfortable, accepted and supported. After starting out in the university’s engineering program, in spring 2018, he switched his major to political science.

“There was a real sense of community among faculty and staff at the university and in the political science program specifically,” he said. “We laughed and talked and genuinely enjoyed spending time together, which is very conducive to learning. To be able to enjoy going to class and learning – it was incredible.”

Engels noted that his professors were very hands-on and willing to work with students. Throughout the spring semester, he met weekly with Sappleton, his academic advisor for a political science independent study course.

“Dr. Sappleton was always receptive to giving advice and reassurance,” said Engels. “She was straightforward, direct and so incredibly positive about my accomplishments and my success as a student. She was, and is, more of a mentor to me than an advisor.”

“There is certain depth to Kyle’s work, which as a professor is exciting to see,” said Sappleton. “It is a testament to his thorough approach to research and ability to push beyond the more immediate, self-evident answers. Also, while a bit of an introvert, Kyle has an excellent rapport with his peers, both inside and outside of the classroom. It has been a pleasure to watch him grow academically as well as socially.”

Engels pursued excellence throughout his academic career. This spring, he was selected as the winner of UW-Platteville’s Department of Social Sciences’ Outstanding Social Sciences Paper award for his paper, “War and Diplomacy: How Military Conflict May Affect the Normalization of Interstate Relations.” His paper “Immigration Policy Analysis: The Cuban Adjustment Act” was also a finalist for the award.

“Grading Kyle’s work was always a treat,” said Dr. Travis Nelson, associate professor of political science and chair of the Department of Social Sciences at UW-Platteville. “Even his homework assignments would regularly have a couple of small insights that could themselves be developed into full academic papers. Kyle is extremely bright and creative. I feel lucky to have had him as a student.

Engels said his favorite learning experience while a student at UW-Platteville was participating in a short-term study abroad experience, “The History of Science and Technology in Europe.” During the two-and-one-half-week course, he and his classmates and two faculty advisors travelled to Hungary, Austria, Slovakia, Germany and Netherlands to study the modern scientific and technological history of Europe over the past five centuries, with a specific focus on the ways that scientific developments have been intertwined with Europe’s wider political, economic, social and cultural history.

Prior to the trip, Engels had never been on a plane. The furthest east he had travelled was to Ohio; the furthest west was no more than 50 miles west of the Mississippi.

“The study abroad in Europe really opened my eyes,” said Engels. “I saw so many ways of life I had never experienced before. The cultures in each country were so different from each other and from anything I had ever imagined. The world had suddenly become very big to me – but simultaneously, very small. It was so incredibly jarring.”

Opportunity to apply for graduate school

In fall 2018, after years of challenging coursework and hands-on learning experiences at UW-Platteville, Engels applied for a range of graduate programs at a number of higher education institutions. One of those institutions was the University of Colorado-Boulder, whose political science doctoral program specializes in international political economy, conflict, conflict resolution and peace-making. The program interested him because it blended well with his interests in international relations and history.

In late March, the University of Colorado-Boulder notified Engels he had been waitlisted. He remained hopeful, and in early April, he was notified he had been accepted.

“I am so excited to begin graduate school and study these important topics that are tied into everything going on in the world – politics, economics, conflicts over resources, climate change, migration and more,” said Engels. “I am also looking forward to seeing the mountains and experiencing things I have never experienced before.”

Engels said there were times when he questioned whether he was prepared for graduate school, but professors at UW-Platteville and the University of Colorado-Boulder quickly reassured him that he was prepared, which put him more at ease.

“One of the things I heard most was ‘Don’t worry; you were accepted into the graduate program, so there is no doubt you are smart enough. If you put in the time and the work, you will be successful.’ After hearing that, I felt reassured. I know I am prepared.”

Plans for the future

After earning his doctorate, Engels would like to perform empirical research, grounded in solving problems by studying the trends and correlations between policy and its effects in the sphere of international politics.

“While worldwide conflict is such a vast problem that I can’t pretend to know exactly how to solve it, I hope, in the work I will pursue, to find ways to promote greater international standards for energy and resource efficiency,” he said. “These standards will help achieve and maintain peace in places already feeling the effects of the resource crunch and foster true cooperation among nations for the purpose of deflecting a greater threat to the stability of human civilization.”

“The best way any individual can fight the coming problems head on is by spreading the word so that as a society we can come together to form proper policy,” added Engels. “I hope to provide the validation of research to that conversation, so that we might make our future endeavors more appropriately informed.”

Engels said he would not have experienced the academic and personal success that he has without the support of his family.

“I am so thankful for the love and support I receive from my family, especially my mom,” said Engels. “She is a single parent, and for as long as I can remember, she has worked two jobs so that my younger sister and I had everything we needed. She has always sacrificed for us. She was never able to help with our college expenses, but we always knew she was there for us. Someday, I hope to be able to help take care of my family the way they have taken care of me.”