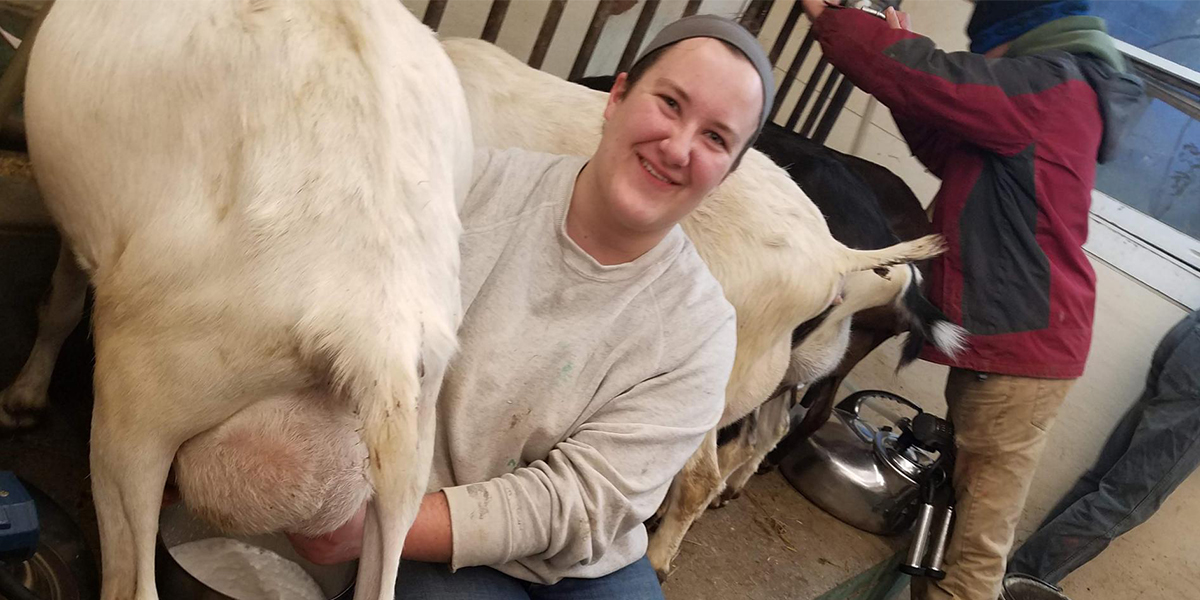 In her years growing up on her family’s farm near Portage, Wisconsin, Esther Considine, the fourth of 10 children, moved through many chores, from feeding chickens, to sheep, and then to goats. The farm’s 230 goats annually produce thousands of gallons of milk that is turned into goat cheese after being shipped to Illinois.

Considine, finishing her associate degree at UW-Platteville Baraboo Sauk County, wondered why some top milk-producing dams (mother goats) would have daughters who didn’t produce as much, or why really productive dams would sometimes be the kids of more typical animals in the previous generations. After studying genetics with Dr. Noah Anderson, she developed her research project, initially considering whether a male or female goat as a single purchase would be more likely to lead to high milk production in its eventual offspring. Because male goats (sires) can have so many more offspring every year, and therefore offer more data to researchers, nearly all the studies Considine found dealt with the relationship of sires to daughters, rather than dams to daughters, so she and Anderson designed a study to begin filling that gap.

Considine will share her findings with legislators, state leaders, alumni and the public at the 16th annual Research in the Rotunda event in the state capitol in Madison, Wisconsin on Wednesday, April 17.

She selected 45 of the farm’s goats, from five breeds, including 18 pairs of dams and daughters, and collected 10 samples from each goat, over a five-month period. By recording the milk’s weight after each milking, she could plot their production and do a regression analysis to see if the kids took after their mothers.

The relationship isn’t statistically significant so far, but it is leading Considine to focus further on certain breeds as she continues to see if she can find a connection that could help farmers make breeding decisions to increase the productivity of their herds.

She credits Anderson and her other professors at UW-Platteville Baraboo Sauk County with encouraging her to continue her education. “I thought I would just take one semester, then go on [to tech school], be a Vet Tech (veterinary technician) and be done with school,” Considine said, but something Anderson said to her stuck in her head.  “(He said) ‘C’mon. You really should try for something else.’ And I thought, I’m coming back – they really do care.” Considine currently plans to become a veterinarian after she graduates with her associate degree with an emphasis in biology in the spring of 2019.