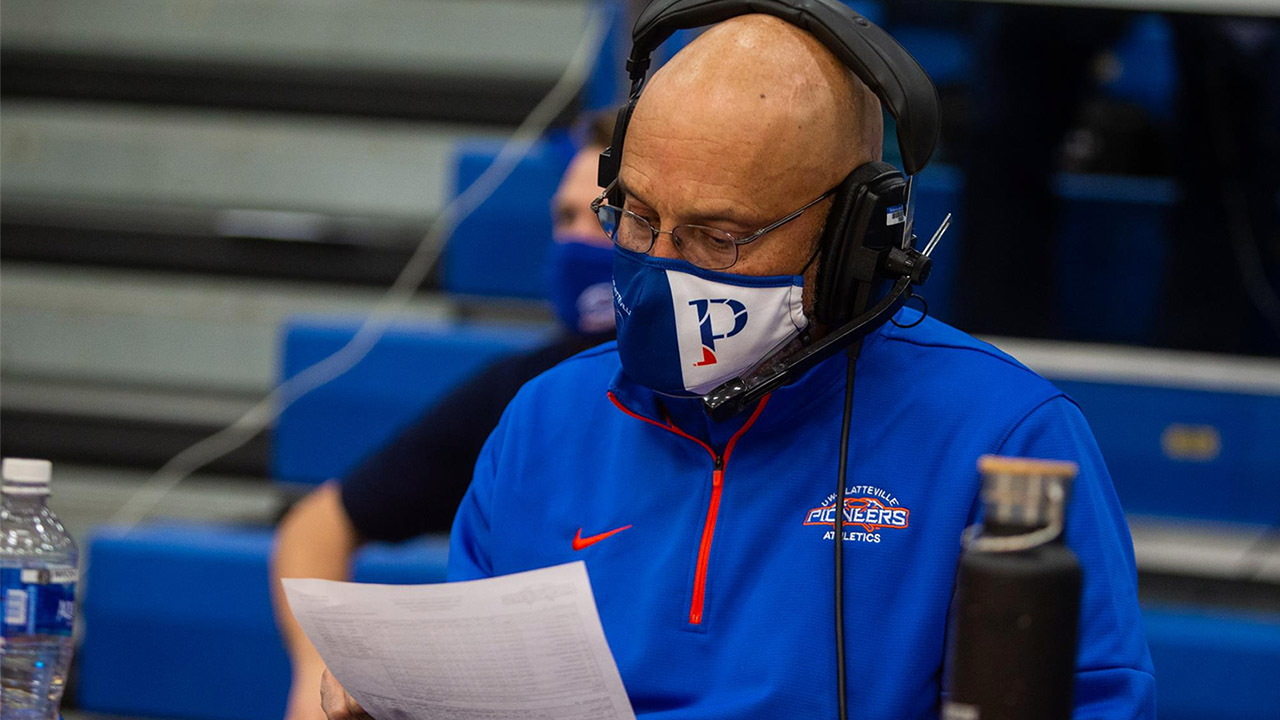 Last week marked a significant milestone, as the University of Wisconsin-Platteville Pioneer men’s basketball team returned to competition on Bo Ryan Court for the first time in nearly a year. And while fans aren’t able to attend sporting events, they will see a familiar face during the livestream, as Chancellor Dennis J. Shields takes to the announcer’s booth as the color commentator for all of the men’s and women’s basketball home games, making what is sure to be an unforgettable season even more memorable.

When the Wisconsin Intercollegiate Athletic Conference (WIAC) was given the greenlight to proceed with competition, Chancellor Shields set in motion the steps needed to provide a quality livestream product to allow fans and family to follow along.

“It started with the idea of the absence of fans,” said Chancellor Shields. “We have a good fan base, and I wanted a high-quality product for them so they could follow this winter.”

The Pioneer athletic department quickly tabbed longstanding partner QueenB Radio’s Daryl Fischer for the play-by-play and didn’t have to look too hard to find the right fit for the color commentary position.

“I always had a passion for basketball,” Chancellor Shields said. “I wasn’t going to do the play-by-play, but said I would do the color commentary.”

Since his arrival to UW-Platteville in 2010, Chancellor Shields has been a strong ally of Pioneer Athletics.  He could easily be spotted at Pioneer sporting events, from his front row seat at Bo Ryan Court to supervising from the sidelines at Ralph E. Davis Pioneer Stadium, cheering on the Pioneers.  Now Pioneer fans will see him on the livestream doing the color commentary for men’s and women’s basketball.

The Chancellor made his debut on Feb. 3 when the Pioneer men’s basketball team hosted UW-Oshkosh. The Pioneers would go on to win and the livestream product was a success.  Like a basketball coach reviewing film after a game, Chancellor Shields did some self-reviewing and looked for areas to improve.

“I think, like anything else, it is harder than it looks,” Chancellor Shields said.  “You are hearing the play-by-play in one ear and the producer in the other ear and you are trying to say something that is useful and insightful. Working with Daryl, he has a certain rhythm and we will get better. I will learn when he wants me to add something to what he is saying.  Another thing is trying to be prepared. I know our teams, but still have to do homework. The visiting team is a little harder, and I will have to work on getting more information on them.”

“I know he was excited to do this,” said Dr. Kristina Navarro, director of athletics and recreation and assistant chancellor for sports administration. “He is such a fan and supporter of the student-athlete experience. It is a positive for the whole university to see the livestream and see the chancellor on the sidelines, knowing who the players are and actively supporting their efforts on the court and in the classroom. He does study up and does his homework to know who these student-athletes are.  It is really special to see a chancellor take such an interest in the student-athlete experience and our 16 intercollegiate athletic programs.”

The livestream is a multi-camera production with graphics, commercials, and pre-recorded player and coach interviews put on by Production Manager and Senior Media Specialist Russ Hill. Livestreams will also be available on demand after the completion of the game.

As the chancellor gears up for the rest of the season, he has already shown his quick wit and humor when asked about his future on the livestream after this year.

“I sent my tape to ESPN already,” he quickly said.

Navarro added, “If he lands it big with ESPN I may need to re-negotiate his volunteer contract.”