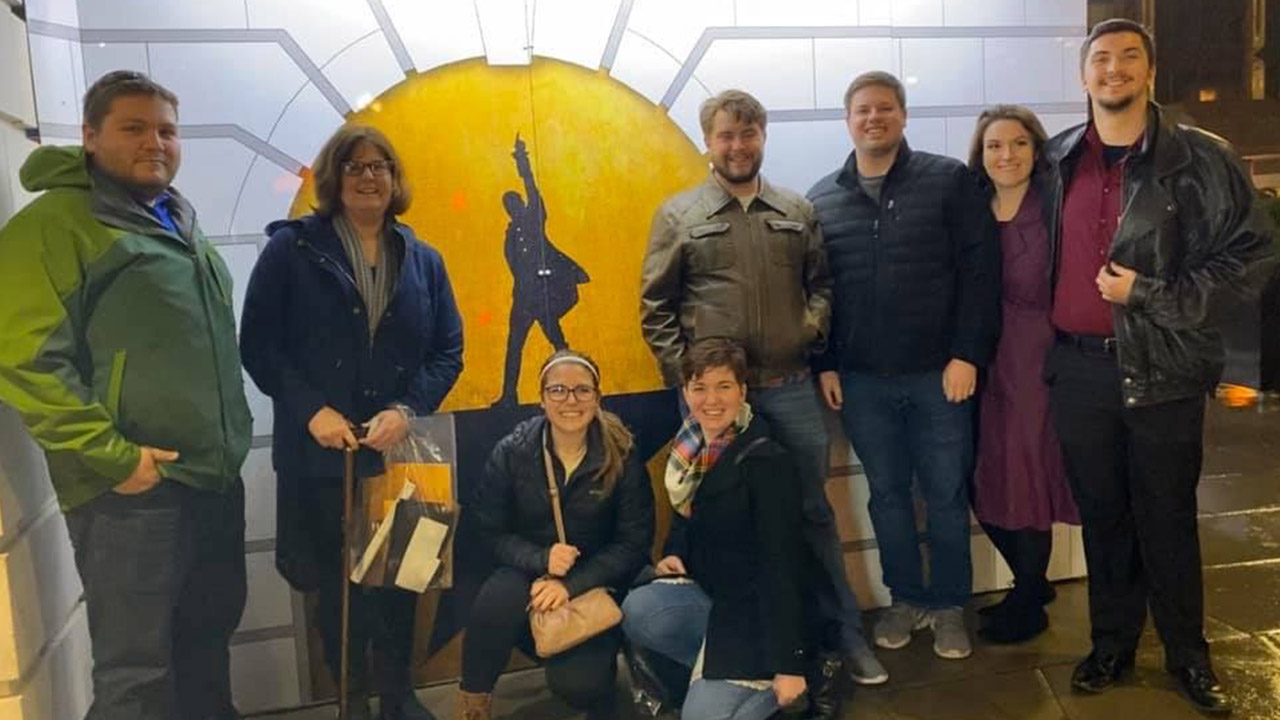 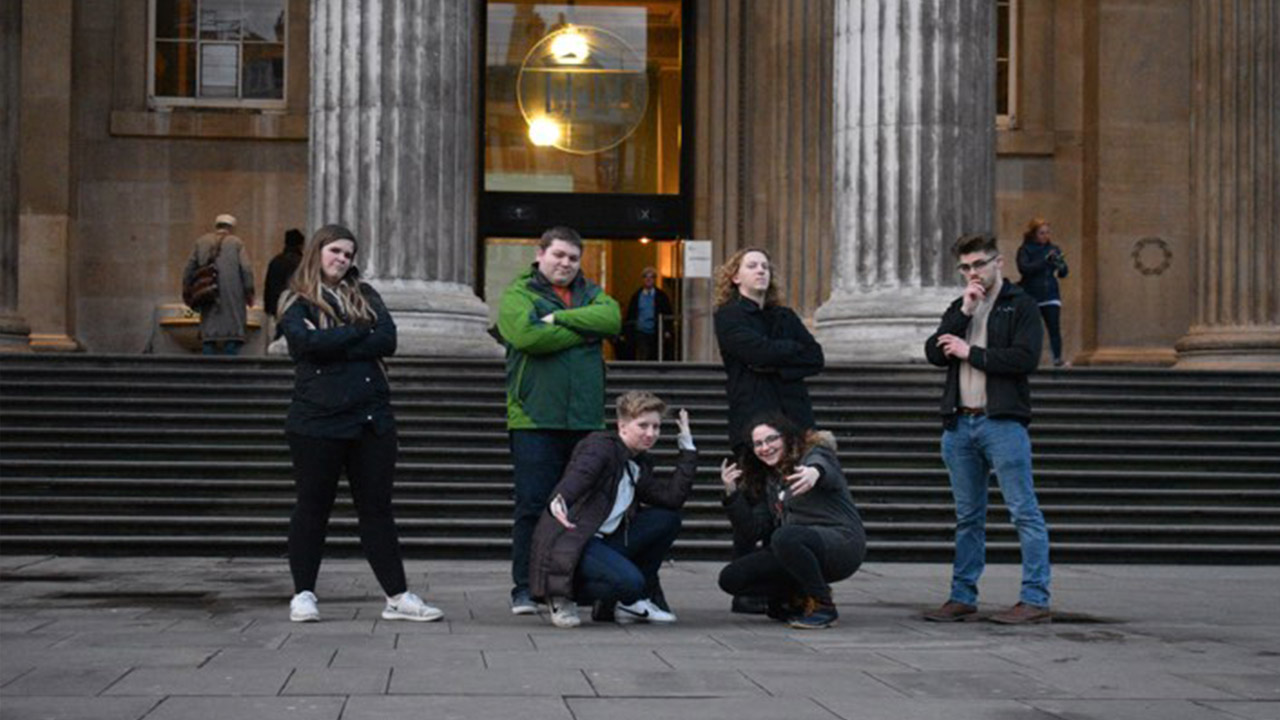 It is the first time that a complete standing music ensemble has ever travelled abroad to represent UW-Platteville.

The purpose of the week-long program was to help students understand and experience British music, historical landmarks and important works of dramatic literature performed by world-class theatre companies – and give them an opportunity to sing in a variety of historical locations.

“This hands-on learning opportunity was a life-changing experience for many of the students,” said Demaree. “It gave them a chance to sing choral literature written by English composers – as well as an American spiritual – in very special, historical places that were specifically designed for music performance. For some students, it was their first time flying and/or travelling outside the United States.”

After arriving at London Heathrow Airport, the group took a trolley to their hotel, St. Giles Hotel, in Bloomsbury, London. The following morning, they attended an orientation session at the Anglo Educational Services Study Centre, where former Metropolitan Police Officer Dave Pullan discussed safety concerns, notably how to avoid pickpockets or, as he referred to them, “pinchers” and “draggers.”

During the following days, choral students enjoyed five theatre performances and toured a number of historical landmarks, including Westminster Abbey, the Tower of London, the Victoria and Albert Museum, the British Museum and Hampton Court Palace.

They also visited Stratford-upon-Avon, a medieval market town in England’s West Midlands and the 16th-century birthplace of William Shakespeare, where they toured Hall’s Croft and Shakespeare’s New Place, which includes a museum in a 16th-century home and a beautiful Elizabethan garden. They then visited the Church of the Holy Trinity, enjoyed lunch at the Garrick Inn, and then sang in the Guild Chapel.

“It’s impossible to walk down a street in central London or Stratford without having centuries of history drip on you,” said Demaree. “Seeing the places where people like Shakespeare, Newton, Purcell and Elizabeth I lived, worked and are now buried speaks to the youth of our country, by comparison.”

The most memorable part of the trip, for everyone, was singing British choral works at St. Clement Dane’s Primary School in central London, the Guild Chapel in Stratford-upon-Avon, and Southwark Cathedral, just south of the Thames.

“I have been on many, many international trips, but this was the first time I had ever been with the full standing choir,” said Demaree. “For me, having the university’s advanced choir members sing at the Southwark Cathedral was deeply moving. I had the undeniable sense that the experience mattered deeply to them too.”

“My favorite part of the trip was singing at Southwark Cathedral,” said Becky Pink, a senior choral and general music education major from Highland, Wisconsin. “There are no words to describe what it felt like to sing in a beautiful space like this. During our concert, I was struck with every emotion, as it was so surreal to be performing here. I am forever grateful for this opportunity, as I plan to be a music teacher when I graduate. This trip opened my eyes, as I was able to immerse myself into a new culture for a week while learning about British music and landmarks.”

“We performed in the most beautiful places and it was for us to share together and carry with us the rest of our lives,” said Justin Blahnik, a senior education major from Cuba City, Wisconsin. “It really hits you when singing in the chapels we performed in – the large chapel, where the sound could echo forever, or even the small chapel, where the sound was completely different, but still amazing.”

Blahnik said his future goal, as a teacher, is to take his past experiences, whether they be in classrooms or traveling outside the United States, and use those experiences to grow as a teacher and as a learner and apply that knowledge to his future career.

“Teaching, to me, is not just about me teaching students, but about what the world can teach me,” he said. “This experience taught me a lot about being open to other cultures around the world and taking what I have learned into my classroom to share with my future students. It also encouraged me to travel more in the future to learn and grow more.”

Blahnik acknowledged that he felt a mixture of emotions during the trip.

“I felt honored to perform with my friends, and I cherished this experience to the fullest extent,” he said. “It was also very bittersweet because for some, it was the last time they will perform for this ensemble. I had to say goodbye to a few friends, but the memories I made with them will last a lifetime. We are a part of history by being the first chamber choir to perform abroad, and I feel like that is the biggest reward for all of us, and it shows the definition of what being a Pioneer is all about.”

“I am so proud of our students,” said Demaree. “Throughout the trip, they did an excellent job representing UW-Platteville. I was impressed with how much they aggressively sought out every experience they could, in the time that they had.”

Demaree said the key to the trip’s success was that Chamber Choir members worked together and built a consortium to help fund the trip.

“This trip was possible thanks to the fundraising efforts of Chamber Choir members and alumni, the generosity of several Platteville businesses, including Steve’s Pizza Palace, Country Kitchen and Dairy Queen, as well as financial support from the College of Liberal Arts and Education Dean’s Fund, the Department of Performing and Visual Arts, the Lyle and Ruth Olson Fund and the Office of Research and Sponsored Programs Student Research and Engagement Fund,” he said.