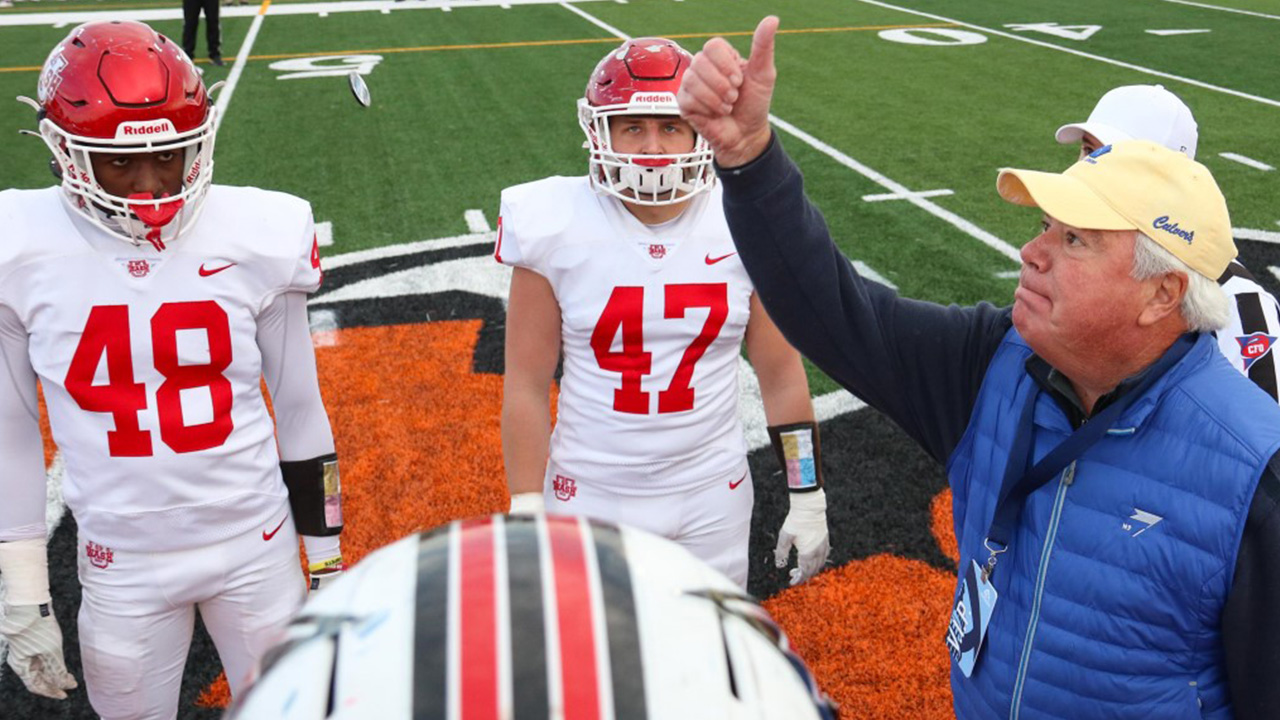 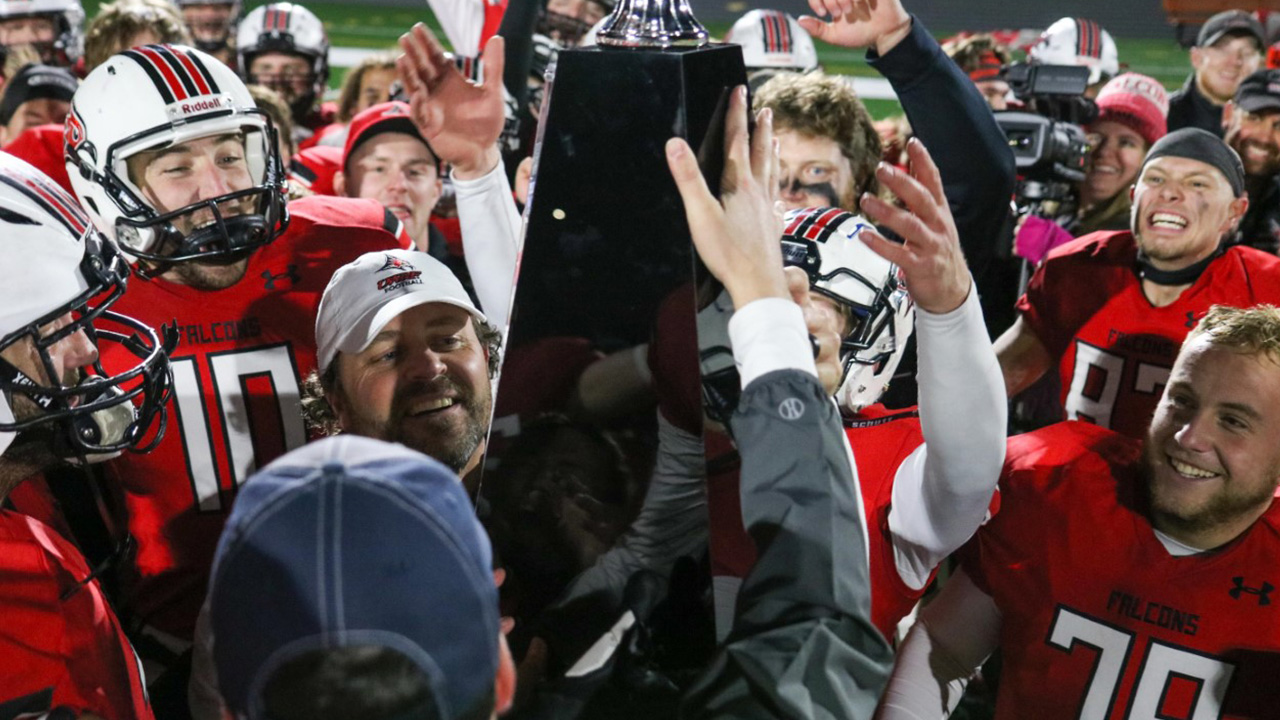 “I am a big supporter of Division III athletics,” said Shaw, Founder and Director of the Culver’s Isthmus Bowl. “I always noticed teams in the WIAC and CCIW would have their seasons end so abruptly but should be playing in the national tournament— not just football but all sports. These two conferences are so good. Teams that finish in the middle of the pack could win games in the national tournament. That led me to wanting to start a bowl game. I actually thought of it during COVID quarantine boredom.”

The boredom of quarantine quickly turned into creating a proposal and finding a title sponsor for a Division III bowl game. Shaw contacted and presented his 20-page bowl game proposal to over 40 companies around the state of Wisconsin, mostly around Madison, and got the same answer every time.

Running out of companies to present to, it was his father Dave, a lifelong Division III advocate, referee, and coach in the state, who recommended reaching out to Culver’s.

“I never thought about reaching out to Culver’s. I thought they would be a long shot,” Shaw said. “My dad was the person who recommended writing Culver’s. I told him ‘you are nuts’ but decided to take his advice.”

Sometimes parents do know what they are talking about. Three days after an initial email with his 20-page proposal to Culver’s Co-Founder Craig Culver, Shaw received an email from Culver with the contacts of two individuals in the marketing department.

“Craig Culver responded to my email. He told me to get in contact with Culver’s Director of Marketing Jennifer (Leahy) Sullivan ’97 and Culver’s Marketing Specialist Aaron Kelsey ‘15,” Shaw said. “Both are UW-Platteville alumni; it was kind of a lay-up from there. Division III rings true to Culver’s, and Craig is a UW-Oshkosh graduate. It was a great fit.”

How did what Shaw thought was a long shot, come to a reality?

“Mike wrote a powerful letter to Craig,” Sullivan said. “Craig looks at everything he gets – email, letters, newspapers, everything. Craig is an alumnus of UW-Oshkosh and is a big supporter of UW-Oshkosh and the overall state of Wisconsin. Craig came to us and said, ‘you know, we do so much with the Badgers, let’s help this group kick off this event and make it something with them.’ What Mike wrote to Craig really resonated with him.”

With a history of supporting the WIAC through sponsorship of all the WIAC Conference Championships, Culver’s is also a big supporter of the communities they are in and academics – something that is a core value in the WIAC, CCIW and Division III athletics. Every WIAC school and many CCIW schools has a Culver’s restaurant in their city.

“Craig has a commitment to the state of Wisconsin and the communities that we are in and being backers of education. These student-athletes are handling a lot, so why not find ways to reward and recognize them.” Sullivan said.

“Craig saw the value in it,” Mackey, a former student-athlete at Akron University said. “Not just the potential of having a Division III bowl game as a unique thing, it was also about the communities and bringing them together.”

With Culver’s committed to becoming the title sponsor for the first five years, Shaw needed to get the conferences and football coaches on board next.

“Having Culvers on board, I felt I had the wind behind me and pitched it to the conferences and got zero negative feedback from them. That is when I felt I got something here and rolled with it,” Shaw said.

Before making an official announcement to the public, Shaw needed final approval from the WIAC’s chancellors and the CCIW’s presidents. “It was a little easier and quicker with the CCIW schools. The presidents of each university were the only ones that had to approve it,” Shaw said. “With the WIAC, I had to go through faculty athletic reps, athletic directors, the commissioner, the head coaches and finally the chancellors.”

The CCIW approved of the bowl game in November of 2020, and the WIAC followed suit with an approval in May of 2021. Born was the Culver’s Isthmus Bowl, with the inaugural game played on Saturday, Nov. 20, 2021.

With the approval of both conferences, Shaw began the logistical planning. Wanting the bowl in the Madison area, Shaw connected with Verona Area High School to tour the facilities. After the visit, not only did the bowl have a sponsor, it had a state-of-the-art facility. “Verona was the first school I connected with,” Shaw said. “It is a brand-new school and one of the nicest high school facilities I have ever been to.”

Fortunately for Shaw, there weren’t any major roadblocks that would put a stop to the game. The only concern was a minor issue with the size of the goal posts. The goal posts at Verona High School are slightly larger than the regulation NCAA size. “Really, the goal post was the only real issue that came up, and it wasn’t even a real issue as every coach said, ‘if our team is selected, we are playing regardless of the goal post size.’” Shaw said.

“One of the other positives from the event is to highlight some of the causes that we are doing as an organization,” Mackey said. “Just being able to spread the word of the goodwill that is being done out there and just have a positive vibe and keep pushing that as our brand message. Outside of that, it was game on.”

UW-River Falls would become the first ever champion of the Culver’s Isthmus bowl, defeating Washington University 48-27, tying an NCAA Division III single-game record of 44 first downs. It is an experience that Falcon’s Head Coach Matt Walker and his team will never forget.

“From the very beginning, it was first class the way it was run,” Walker said. “It exceeded expectations. I felt our kids felt overwhelmed by how much attention it got, how well received it was, the way they were treated. It was just first class all the way around—from Mike, all the people helping, all the volunteers. It was hard to tell it was a non-scholarship event. It felt like a power five event in the eyes of our guys. To have a season like we had and feel like it shouldn’t be done yet, that we deserved to keep playing. I am sure Wash has the same feelings, to have the opportunity was amazing. We owe it all to Mike for dreaming this game up and putting it all together. I can’t say enough about Mike, the experience and the opportunity he gave us with the bowl.”

With nearly two-years of planning, Shaw witnessed something many people told him wouldn’t happen. With Culver’s partnership, the vision of Shaw and the attention the Culver’s Isthmus Bowl brought to Division III football, Shaw believes the game will only grow and provide a map for other Division III bowl games.

As the final whistle blew and the trophy was handed out, Shaw was already thinking ahead to the 2022 Culver’s Isthmus Bowl Game. “I would really want to host the teams for a dinner the night before the game. That would be the only major change I want to do, everything else is minor tweaks,” Shaw said.

Knowing how the bowl started as a dream and became reality, next year’s participants will surely have a nice welcome dinner the night before the contest.