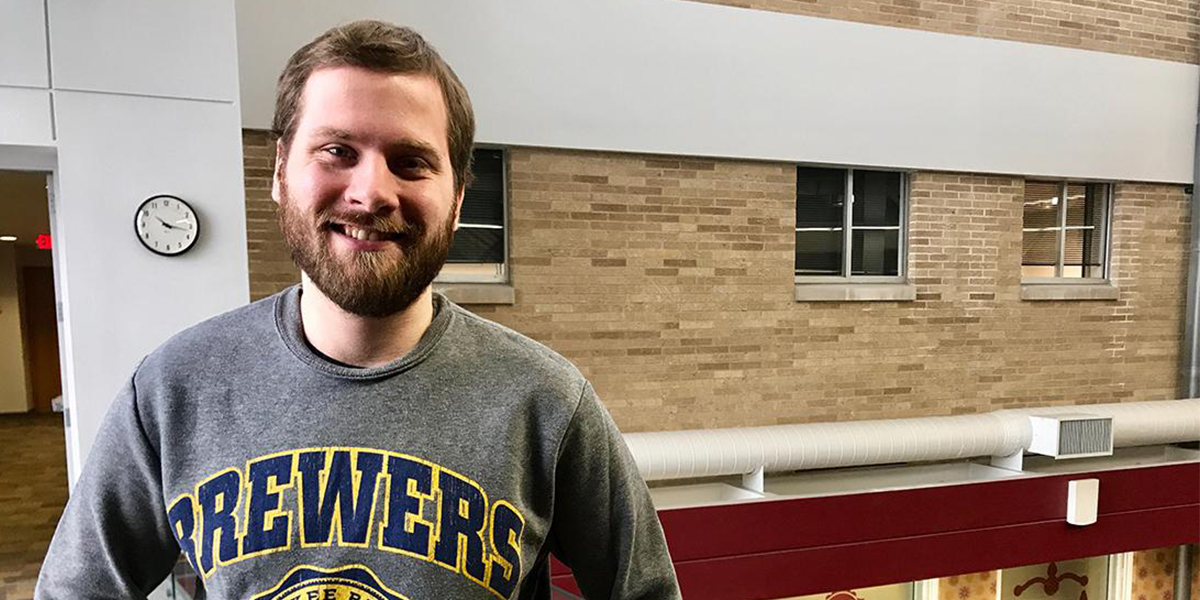 Fueled by a strong work ethic and a desire to pursue a career in which he can create lasting social change, University of Wisconsin-Platteville alumnus Spencer Wingert is already well on his way to achieving one of his lifetime goals: to earn a law degree.

Wingert, a native of Mukwonago, Wisconsin, graduated from UW-Platteville in May 2017 with a Bachelor of Arts in Political Science and a Bachelor of Science in Criminal Justice. Thanks to his intensive criminal justice and political science coursework and hands-on learning experiences as an undergraduate student, Wingert is now a successful, first-year law student at Wisconsin Law School in Madison.

Wingert was inspired to pursue the field of criminal justice by his uncle, who has a career in law enforcement. When Wingert began researching universities following high school, he ultimately chose to attend UW-Platteville because he knew it had an excellent criminal justice program. From the moment he began his criminal justice and political science courses, he knew he was pursuing the right fields.

Wingert said the outstanding education he received at UW-Platteville fully prepared him for law school. In addition to offering a small campus-feel and a wide variety of courses in his areas of interest, UW-Platteville had professors who provided interesting, challenging coursework that enabled him to gain the knowledge and skills he needed to be successful in law school and in his future career.

“UW-Platteville professors taught me to work with constructive criticism, even when I disagreed with it,” he said. “I learned how to work toward the standards my professors set – and to accept that those standards were helping me think in a different way. Class discussions forced me and my classmates to be keenly aware of opposing arguments and at the same time quickly show a close-minded person they won’t get far or be respected.”

Wingert noted that it was the hardest professors at UW-Platteville who best prepared him for law school. “Take any upper level political science or criminal justice course and I’d say you’re relatively prepared to take on law school,” he said. “My professors’ approaches to written exams and papers was a great first step to understanding that true understanding comes in application of the material rather than a recitation.”

In addition, he said his professors were excellent teachers and mentors who really cared about him and his classmates. “Above all, my best teachers were passionate, and they loved to see that passion in their students,” he said. “Their passion led them to drive meaningful discussion in their classes, which helped solidify the more nuanced information in the course. Being a great professor isn’t simply about covering the textbook, and they clearly understood that.”

“Dr. Patrick Solar, my criminal justice advisor, and Dr. Travis Nelson, my impromptu political science advisor, are the reasons why I am attending law at Madison,” added Wingert. “These two professors saw something I couldn’t, and I owe much of who I am, and who I intend to become, to them. They are the prime example of what can happen when a professor takes a vested interest in his or her students.”

“I fondly recall Spencer in class,” said Solar, assistant professor of criminal justice at UW-Platteville. “He put me on the defense regarding a topic and challenged the prevailing discussion. He offered a different point of view from what I considered to be a typical law enforcement perspective and for that he earned an “A” for the day. We need more of this from our students. The willingness to challenge the prevailing orthodoxy deserves to be recognized and rewarded.”

“Spencer’s experience at UW-Platteville is a great example for other students,” said Nelson, associate professor of political science and chair of the Department of Social Sciences at UW-Platteville. “He didn't necessarily know what he wanted to do with his degree right away, but he pursued his interests, explored opportunities, worked hard and ultimately ended up at a great law school.”

In his final semester at UW-Platteville, Wingert interned for Karen Kurt, the Platteville City Manager. As an intern, he shadowed Kurt as she provided management and supervision of the city organization under control of the Common Council. He attended Common Council and economic development meetings, and was the student liaison to the Downtown Parking Task Force project with UW-Platteville. He organized each meeting and conducted the communications work between the students and the city. His largest project was developing a behavior guideline for the Platteville Transit System.

“This experience gave me confidence in a professional setting and also taught me to be more assertive about my goals in such a setting,” said Wingert. “I also got an inside look into the surprisingly hectic life of a relatively small-town official.”

“Spencer is smart and he enthusiastically dug into every project we gave him,” said Kurt. “That tenacity will serve him well as a lawyer or an elected official.”

The experience also paved the way for a post-graduation internship at the Wisconsin State Capitol. “I have little doubt that my internship for the city manager, which was an internship directed by the Political Science program, was essential to me getting the opportunity to work at the capitol,” said Wingert

As an intern at the Wisconsin State Capitol, Wingert was in charge of dealing with the concerns of constituents of the state representative for whom he worked. Almost immediately, he was brought into the loop of all of the legislation that was being discussed around the capitol. He found that he quickly had to adapt to learning and performing a wide variety of tasks.

He said the experience was invaluable. “Looking into legislative history or relevant statutes for the research purposes of my representative was an experience that has paid for itself in law school,” he said. “I most enjoyed being in a professional work environment that was also surprisingly relaxed. I had a lot of responsibility, but the staff I worked with at the State Capitol were as nice as you could find.”

Someday, Wingert would love to be a state senator or a house representative. “Those avenues would allow me to combine my various passions and give me the privilege of pushing forth the social changes driving that passion,” he said. If those goals don’t pan out, he hopes to use his legal education to work in clinics and assist disadvantaged persons with legal needs.

“I want to encourage those who don’t feel competent enough for whatever goal they have or haven’t dared to consider that it is absolutely possible,” said Wingert. “In elementary school, I was a problem child. In high school, I was a mediocre student. I found my passions at UW-Platteville and, through a variety of experiences and great professors, I (slowly) realized that I could accomplish so much more. If I can go to my deathbed being remembered as someone who worked selflessly for the social good, whether or not that person agreed with my vision, I’ll be pretty satisfied. I want to take my experiences and apply them in a meaningful fashion to the world around me.”