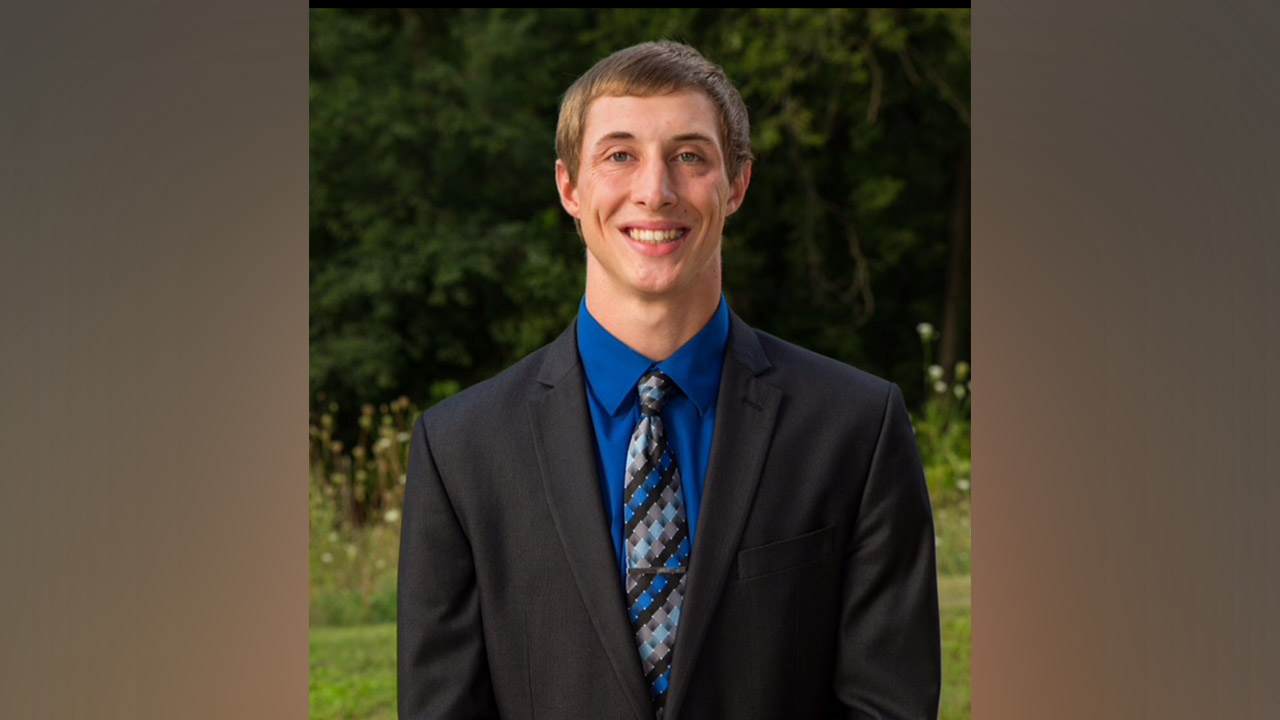 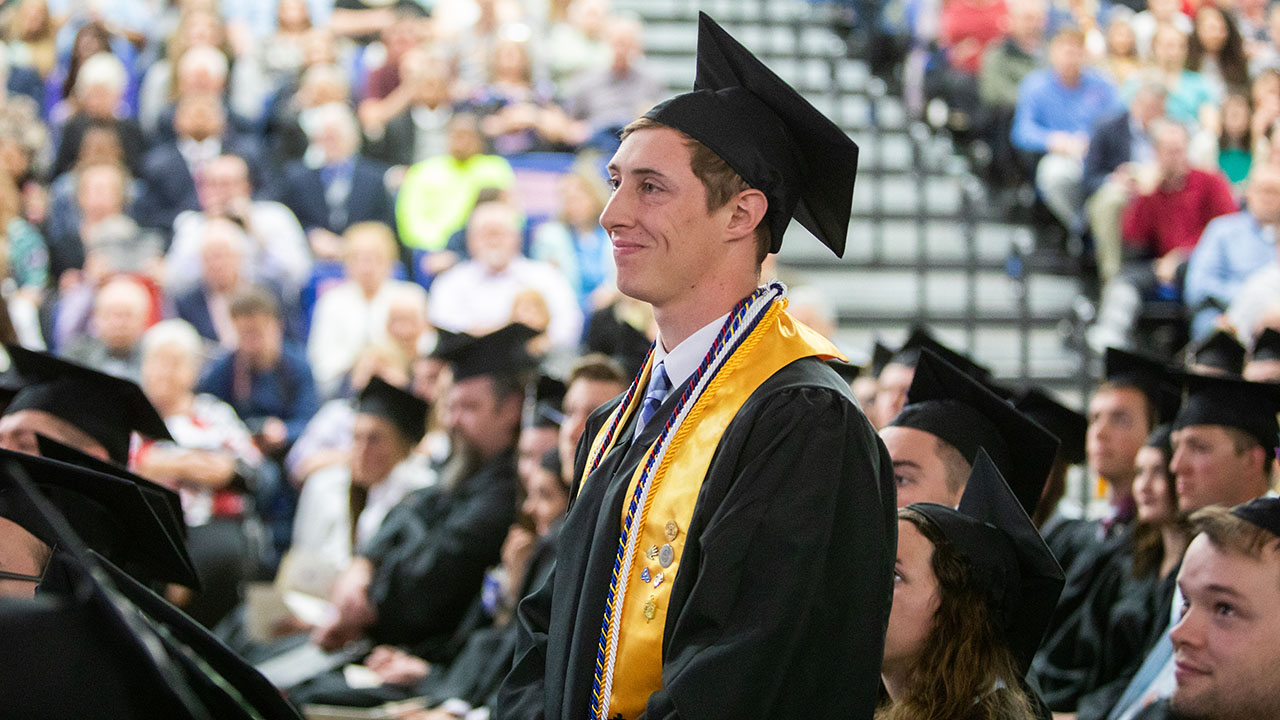 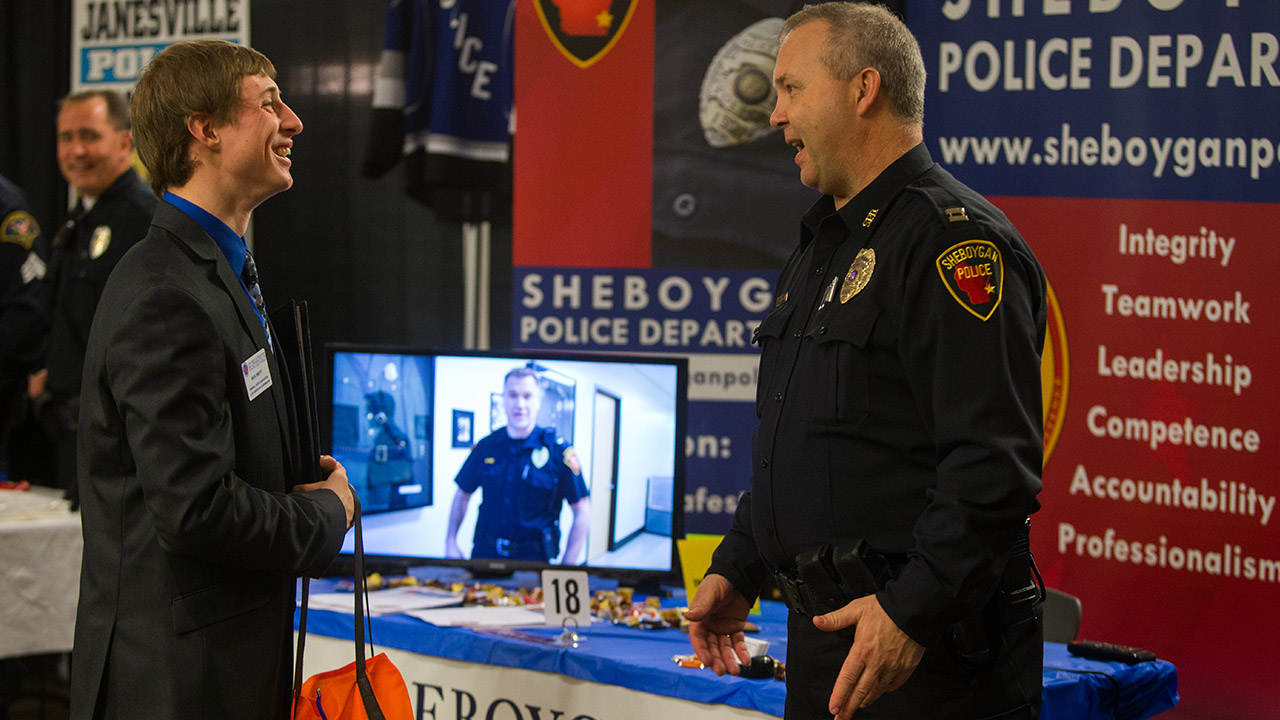 There are moments in life when a decision to explore something new turns out to be life-changing, both personally and professionally.

This was the case for University of Wisconsin-Platteville alumnus Nicholas Drott (‘19) of Medford, Wisconsin, when he made the decision to enroll in the Victimology and Restorative Justice course, taught by Dr. Amy Nemmetz, associate professor of criminal justice at UW-Platteville, his sophomore year.

In the course, Drott, a criminal justice major, learned about restorative justice, a theory of justice that emphasizes repairing the harm caused by criminal behavior. He also learned about the needs victims and survivors may have following a victimization.

Later in the semester, as part of the course, Drott had an opportunity to put his newly-gained knowledge into practice when he and his classmates led three sessions of victim impact programming for 50 inmates at Prairie du Chien Correctional Institution in Prairie du Chien, Wisconsin. The goal of the victim impact program, now in its sixth year, is to help inmates take accountability for the people and communities who have been affected by their crimes, understand the hurdles victims face following a crime and participate in opportunities for repairing harm.

In the sessions, Drott and his classmates helped the offenders realize the multiple people harmed by crime, to include their own family members, neighbors and communities. They also led inmates in a victim give-back project – making fleece tie blankets that were donated to victims of crimes – to help offenders feel the power of helping those who have been harmed.

The learning experience at PDCI made such a deep impact on Drott that he continued to participate in some form of restorative justice – a gardening program at PDCI, activities at Platteville Middle School, a conference, etc. – through his senior year.

“Nick’s leadership and enthusiasm were evident, whether he was volunteering time planning the UW-Platteville bi-annual restorative justice conference or volunteering to lead an additional semester of the restorative justice gardening project curriculum for 25 offenders,” said Nemmetz. “The once quiet freshman opted to become a motivated, outgoing facilitator and role model.”

Lisa Pettera, program supervisor at PDCI, said having Nick and the other students facilitate programs has been a win for everyone involved.

“Students get real-world experience and get to put faces and personal stories on what they learn in class,” said Pettera. “Inmates get additional programming above and beyond what the institution provides, led by an optimistic group of people hoping to change the world. And, of course, the community wins when inmates can accept responsibility for their crimes, attempt to repair harm in any way they can and return home with plans to be productive members of society.”

For Drott, the restorative justice experience with inmates was life-changing, both personally and professionally.

“The most substantial way that restorative justice victim impact programming shaped me was in opening my eyes about common stereotypes and biases associated with inmates,” said Drott. “When I first entered the prison, I was intimidated and honestly scared. After only a short time, however, in the first lesson that I led, I became super comfortable and embraced all the knowledge that surrounded me. I would often tell the inmates that, although I was teaching them, they would be teaching me too. That really opened up the conversations and got down to deep daily conversations.”

The skills Drott developed through the hands-on experience at PDCI and his academic success made him very marketable to employers in the criminal justice field. Only two weeks after earning a Bachelor of Science in criminal justice with a minor in sociology and an emphasis in corrections from UW-Platteville in May 2019, he was hired as a youth counselor for the Wisconsin Department of Corrections-Division of Juvenile Corrections at Lincoln Hills/Copper Lake Schools in Irma, Wisconsin.

In the position, he performs security and safety duties, including supervising juvenile youth, ensuring that their physical needs (food, clothing and general health) are maintained, providing case management assistance and other treatment services to youth and maintaining order and discipline within the institution.

Drott credits his restorative justice training for preparing him for his career and for helping him connect with the youth with whom he works.

“Restorative justice experiences helped me become more confident and allowed me to find my voice to become a better communicator,” he said. “In my position at Lincoln Hills/Copper Lake Schools, I use the principles of restorative justice every day, which has allowed me to create great connections with both youth and staff. Being able to talk to the youth, comfortably, about the crimes they committed, family situations, and everything else that has happened or will happen in their lives has made a great impact on my ability to transition so easily into this position.”

“The thing I love most about my position is that I have the ability to help at-risk and incarcerated youth learn lifelong skills, such as respect, communication, cleaning, teamwork and so much more, on a daily basis,” said Drott. “This is something that allows me to make a substantial positive impact on a number of youths who are in the criminal justice system.”

Drott said he also loves that he has the ability to wear many hats, including the hats of correctional officer, social worker, program leader, confidante, listener and more.

Drott and his work are clearly appreciated and valued by the Wisconsin Department of Corrections and those they serve.

“Youth Counselor Drott has made a big impact in the little time that he has been at Lincoln Hills and Copper Lake Schools,” said Jesse Severt, a supervisor at the Wisconsin Department of Corrections-Division of Juvenile Corrections. “He has been working with both male and female offenders. His ability to use verbal de-escalation skills has proved to be extremely important in this environment. Programming in juvenile corrections is quickly changing; therefore, Youth Counselor Drott’s ability to grow with the changes will prove to be rewarding. This, along with his positive attitude on a daily basis, is extremely valuable. We appreciate him being part of our team.”

Support and encouragement critical to success

As he looks back on his academic career at UW-Platteville, Drott expressed appreciation for the support and encouragement he received from many people along the way.

This fall, Nemmetz and 16 students enrolled in her Victimology and Restorative Justice course will lead victim impact sessions at Prairie du Chien Correctional Institution on Nov. 7, 13 and 18.